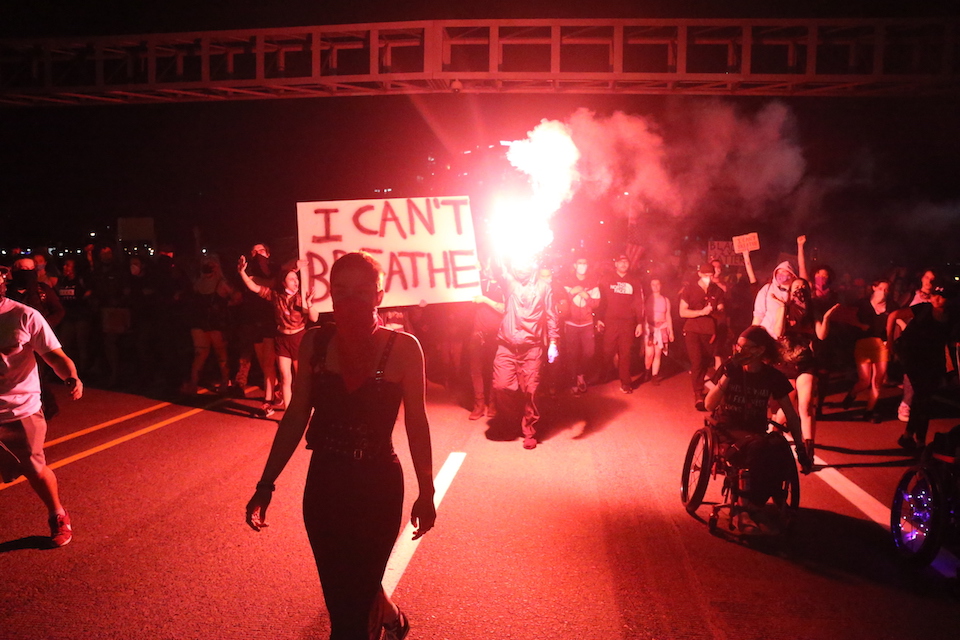 Protesters broke into the police headquarters Friday night in Portland and authorities said they lit a fire inside. And a blaze built from cardboard boxes and other items burned in the middle of a street downtown and video showed people breaking into Pioneer Place mall and taking bags from a Louis Vuitton store. Police said they deployed gas after people threw projectiles and authorities later declared the gathering a riot.

Blazes continued to burn early Saturday morning in multiple locations in downtown, including a building that housed a bank and broken glass littered the streets.

“All persons in downtown Portland: it is not safe, it is dangerous, there is rioting, leave now,” Portland police said via Twitter.

At least one shooting was tied to the protest, police said, although details weren’t immediately available. Officers also said gas was deployed after people threw projectiles at them. Police said two people had been arrested in connection with the overnight disturbance and another person was arrested Friday afternoon.

Portland Mayor Ted Wheeler tweeted a plea to protesters to remain peaceful and said at about 11:50 p.m. that while he had left Portland to attend to his dying mother, he was heading back to the city.

“Portland, this is not us,” he wrote. “When you destroy our city, you are destroying our community. When you act in violence against each other, you are hurting all of us. How does this honor the legacy of George Floyd?” 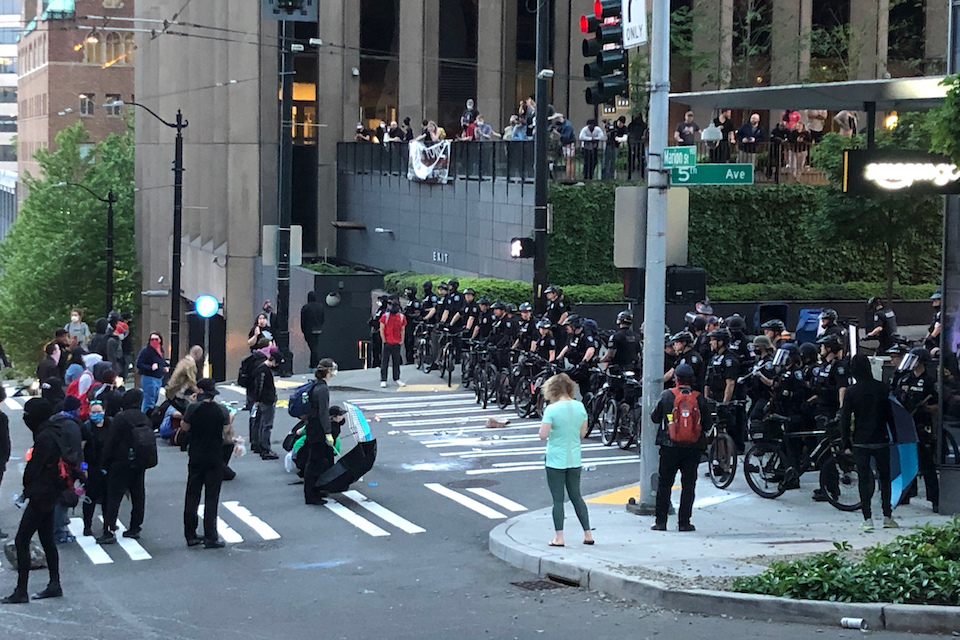 Demonstrators are shown at 5th Avenue and Marion Street in downtown Seattle during a march in solidarity with Minneapolis and protesting police brutality, May 29, 2020. Protests have been erupting all over the country after George Floyd died earlier this week in police custody in Minneapolis. (Amanda Snyder/The Seattle Times via AP)

Leaders in Seattle, where a large gathering is planned downtown Saturday afternoon, urged people to be peaceful.

Mayor Jenny Durkan and Police Chief Carmen Best both said at a Friday evening news conference they were outraged by the death of Floyd, a black man who was killed after an officer put his knee on Floyd’s head and neck.

Durkan said the killing reflected the “deep and systemic racism” in the United States. She also said as a former federal prosecutor she believed it was right that the officer who knelt on Floyd’s neck is facing charges.

“Tomorrow people in Seattle will gather to grieve and to protest,” the mayor said.

Best said she hoped everyone would remain calm and respectful. “This should be a time for healing,” she said.

The Saturday afternoon rally is organized by a group working to reduce fatal police shootings.

“We can’t have officers killing people — unarmed people — and not being charged and convicted,” the group’s leader, Andre Taylor, told The Seattle Times. “We need to see officers being held accountable.”

Speakers at the Westlake Center event include community and youth leaders and pastors. A march to the federal courthouse is planned. Another event is planned for about noon at Seattle Police Headquarters.

There are also rallies planned Saturday in Tacoma.