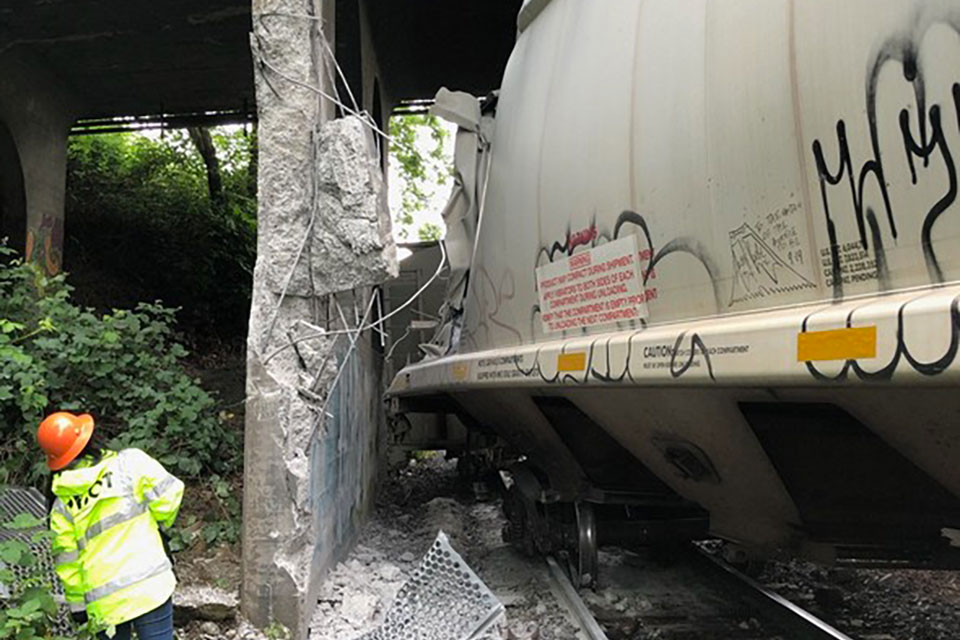 A train derailment in North Portland Tuesday morning resulted in no injuries, but damaged a Lombard Street overpass. It also served as a reminder of the safety hazards of living alongside railways. The cars that derailed were empty, according to a spokesperson for Union Pacific Railroad, and no people were hurt.

Three Union Pacific train cars came off the track at around 6 a.m., and Lombard Street was closed as the cars were removed. John Brady, communications and public involvement director for the Portland Bureau of Transportation, said bridge engineers inspected the accident site and determined traffic could continue on the overpass as long as vehicles were diverted from the impacted area. He confirmed that part of the overpass was structurally damaged and would need to be repaired.

The cause of the accident has not yet been determined, said Raquel Espinoza, a spokesperson for Union Pacific Railroad.

Tuesday’s incident was the latest in a recent timeline of railway collisions and derailments that has proven concerning to local environmental and safety advocates. In September of last year, another Union Pacific train ran off the tracks in Albina Yard, destabilizing the Going Street Bridge, the only access point to Swan Island. In 2016, 16 Union Pacific oil tanker cars came off the track in Mosier, Ore., spilling 42,000 gallons of crude oil that ignited in a blaze. Although there were no fatalities, the town had to be evacuated and much of the cargo spilled into the nearby Columbia River.

OPB reported that a year prior to the disastrous derailment in Mosier, Union Pacific — which runs the second-largest railroad system in the country — had successfully lobbied Oregon against imposing stricter oversight of oil train regulations.

The Oregon legislature has since passed House Bill 9022, which regulates oil transport by rail throughout the state, and which imposes fees to aid the state’s Department of Environmental Quality.

In 2013, The Skanner reported that Multnomah County Health Department had issued a warning that coal trains could damage health. Low-income people and people of color are most at risk because they are more likely to live near train tracks. 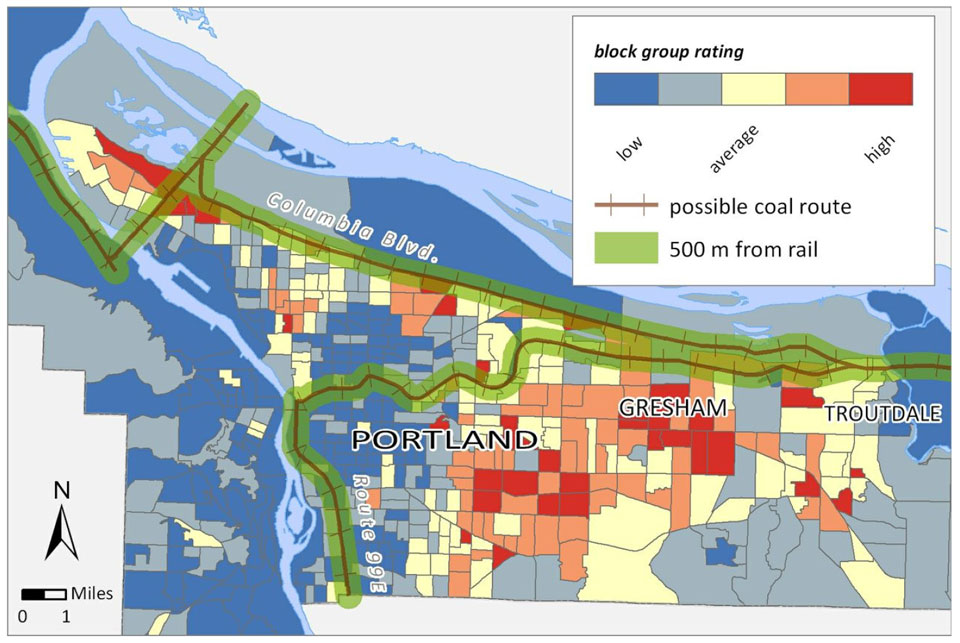 This map shows the concentration of vulnerable demographic groups in census block groups (Metro Equity Composite demographic measure) with 500-meter radius from rail lines that might carry coal. (The Human Health Effects of Rail Transport of Coal Through Multnomah County, Oregon, Feb. 2013) The Skanner
asked how many people could be affected? One in nine Multnomah County residents, or about 82,000 people live within 500 meters of the rail tracks that could carry coal, and would experience some of any potential ill effects.  “I stress potential ill effects,” says Dr. Gary Oxman, a doctor working for Multnomah County. 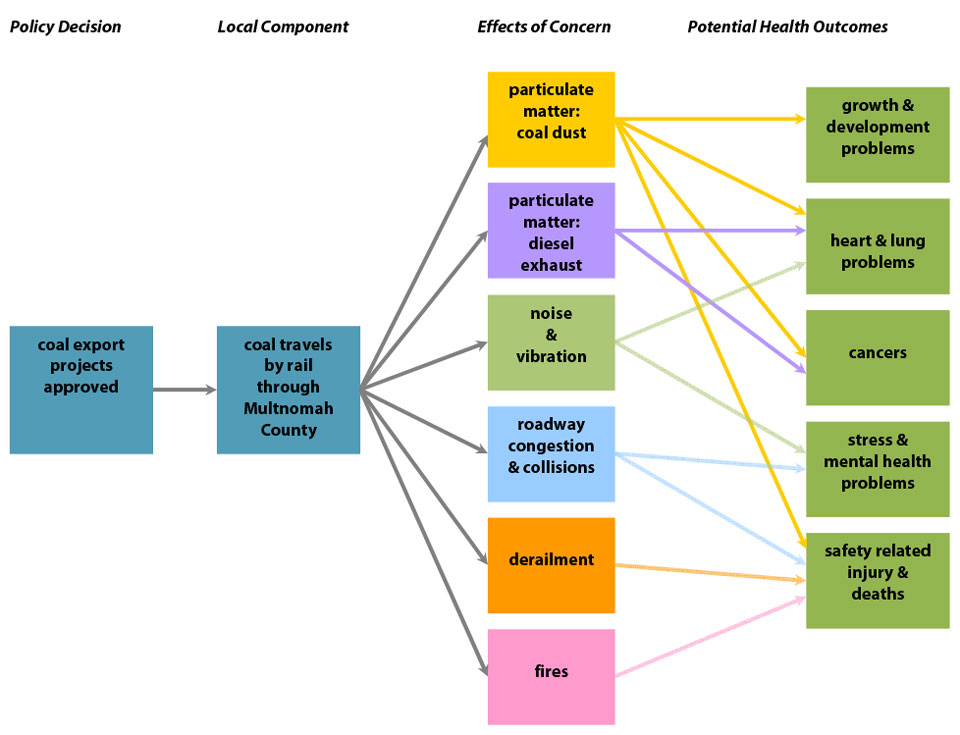 This figure shows the relationships between coal transportation by rail, environmental effects of concern, and health outcomes. (The Human Health Effects of Rail Transport of Coal Through Multnomah County, Oregon, Feb. 2013) The Union Pacific cars that struck the North Lombard overpass were not oil tankers. Still, the incident illustrates the overlap between environmental hazards and residents’ safety.

Activist Ken Ward has a long history of protesting fossil fuel companies and was arrested last year when he and fellow demonstrators planted a garden on train tracks that led to the northwest Portland facilities of Zenith Energy, a company which transports and stores crude oil. While Ward’s focus has been on the rapidly growing oil shipments that move through the Pacific Northwest by rail, he told The Skanner he does not feel that safety has improved anywhere in the industry. 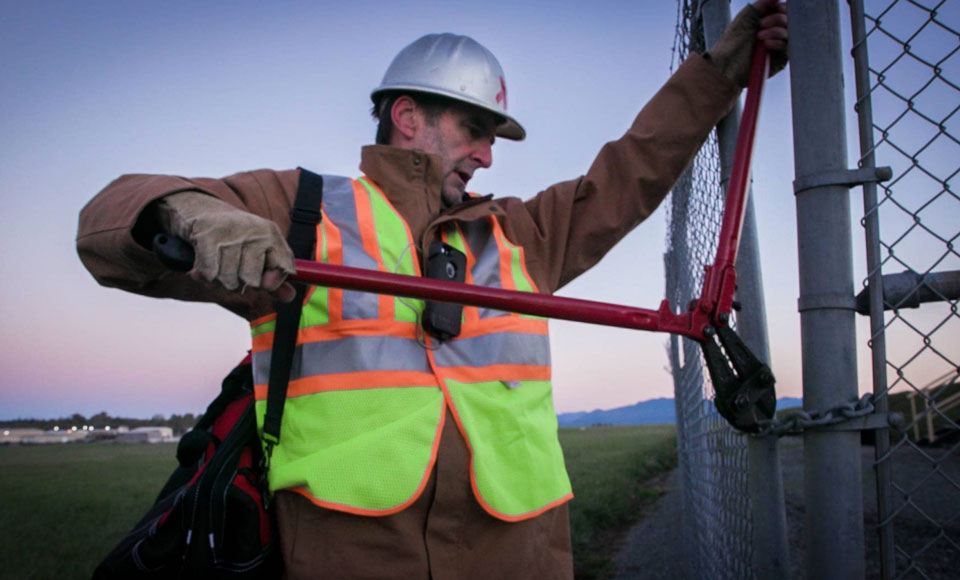 Ken Ward is the "Reluctant Radical" in a documentary that follows Ward for a year and a half through a series of direct actions, culminating with his participation in the coordinated action that shut down all the U.S. tar sands oil pipelines on October 11, 2016. (screenshot from trailer)“The biggest change or improvement in rail safety in Portland is probably the pandemic and the impact on the shipments from Canada, like Bakken oil,” Ward told The Skanner. “Under the Trump administration, we’ve seen reversals (in safety), even under simple things like the federal braking requirements. We had a federal law going into effect in 2015 that required advanced braking systems on larger oil trains, and that was put on hold and then reversed in Trump’s first year, 2018.”

Ward pointed out the difficulty in accessing safety data in the rail industry and more locally criticized the city for what he saw as a lack of transparency in the recent Zenith Energy expansion proposal. Although Portland rejected Zenith Energy’s request to add large pipes to its facility last year, the company submitted a new permit request in April to allow it to expand its operations.

“The Zenith expansion proposal, and the ramping up of the number of trains they’re sending through the Gorge and into Portland, without anyone really knowing about it -- that happened with immense difficulty on the part of the state, city, county, to know what exactly the plans were,” Ward said. “That was striking to me.

"Most other places I've lived, that would be base information you would have. You’d ask, ‘What’s the business operation? What are the attendant risks?’

"To be able to plan to triple your volume of oil trains going through North Portland, through residential areas, without anyone knowing about it, that seems like an extreme gap and lack in public safety.”

Living near the railroad

Across the river, Shawn Looney, former chair of the Linnton Neighborhood Association, said her community has long worried about the risks of living in such close proximity to the railroad.

When a truck driver hauling gasoline collided with a train carrying asphalt in late 2015, it ignited several tankers and led to a massive blaze that shut down much of Highway 30, Linnton’s main thoroughfare.

“It could have been a major, major disaster,” Looney told The Skanner. “We do have crude oil (trains) that run through Linnton, and he could have hit that. So there are a lot of ways that we are potentially not safe because of trains.”

Living alongside the railway has also given Looney first-hand insight into other issues that plague the industry, she said.

“We’re always wishing that the train companies would be as concerned as we are about safety,” Looney said.

“Looking out my window I can see the edge of the train tracks, and my husband and I are very aware of when trains idle. After a while, we’re breathing diesel fumes. Two weeks ago we walked down to the tracks because a train had been idling for several hours, and when we went down Marina Way, our access point to look at the trains, we saw there was a person operating the train who was obviously sleeping and idling that train the whole time.”

Activists are quick to point out that they are not opposed to the railway system at large.

“I just think there's been enough of these sort of small derailments and a general sense that everything is fraying and falling apart, and we're not expanding our rail system, which we should be doing, to make it faster and safer,” Ward said.