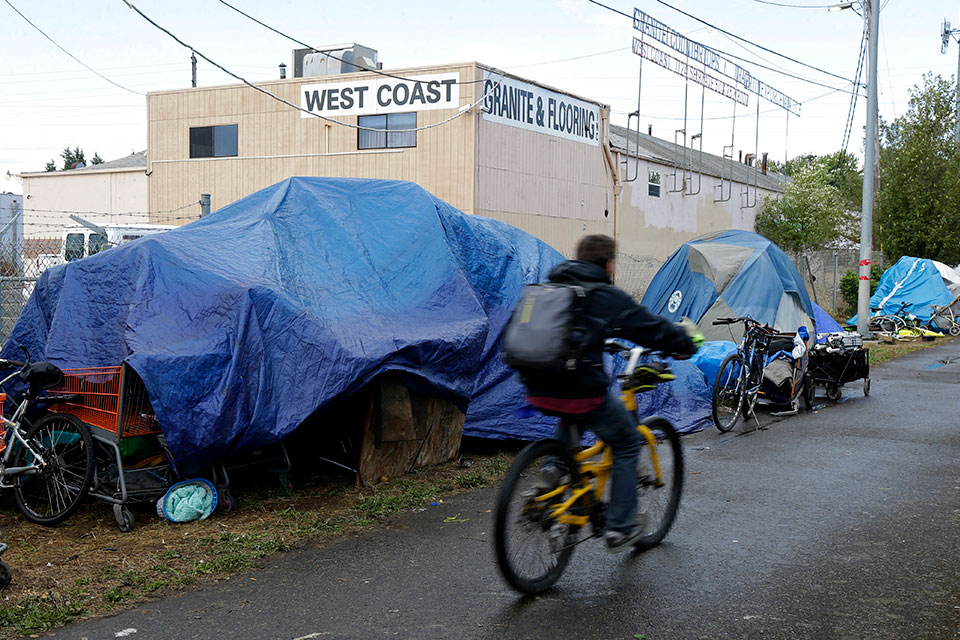 PORTLAND, Ore. (AP) — Voters in metropolitan Portland, Oregon, will be asked Tuesday to approve taxes on personal income and business profits that would raise $2.5 billion over a decade to fight homelessness even as the state grapples with the coronavirus and its worst recession in years.

The ballot measure was planned before the pandemic reduced the U.S. economy to tatters. Proponents, including many business leaders and major institutions, argue the taxes are needed now more than ever in a region that has long been overwhelmed by its homeless problem.

How voters in the liberal city react amid the pandemic will be instructive for other West Coast cities struggling to address burgeoning homeless populations as other sources of revenue dry up. The measure is believed to be one of the first nationwide to ask voters to open their wallets in a post-COVID -19 world.

“I think it’s really going to give you a sense about how concerned are people, still, about homelessness as an issue — and what are they willing to pay in to solve that issue," said Marisa Zapata, who runs Portland State University's Homelessness Research & Action Collaborative.

“We know government budgets are going to be eviscerated, so what does this mean for additional revenue-raising opportunities?" she said.

"Who could we turn to to bear some of that responsibility and how will voters react?”

A recent study by Zapata's institute estimated that in a one-year period, nearly 40,000 people in greater Portland experienced an episode of homelessness and 105,000 households faced housing insecurity.

Opponents say they are surprised organizers continue to campaign for the measure when the majority of Oregon's population remains under lockdown and the economy is stalled. A “no" campaign, almost entirely funded by the Northwest Grocery Association, is trying to draw voters' attention.

Voters in the three counties that make up the greater Portland metro region will be asked to consider a 1% marginal income tax on the wealthiest residents and a 1% tax on gross profits for the region's biggest businesses.

The measure has a 10-year sunset clause and is expected to generate $2.5 billion, although the recession's impact on those estimates is unclear. If it passes, the first taxes would not be collected until 2021.

Roughly 90% of residents and 94% of businesses will be exempt from the tax, said Angela Martin, campaign director for HereTogether, the coalition that crafted the measure.

A possible model for other cities

Voters in the area have a history of supporting measures to address social woes. The same region approved a nearly $653 million bond to build affordable housing in 2018. Organizers are candid about capitalizing on that history to test the limits of voters' pocketbooks in much different times.

The Portland Business Alliance, whose membership has repeatedly identified homelessness as a critical factor affecting its ability to expand and recruit, is backing the measure. So are a host of state and local government leaders and major sports franchises, including the NBA's Portland Trail Blazers.

Money from the previous bond measures can only be spent on building housing, while this money would be devoted to so-called “wrap around services” to help the homeless or those on the verge of homelessness. That includes rent assistance, case management and outreach, job training, and mental health and substance abuse treatment.

The regional approach, with strong collaboration from the business community, could be a model for other cities, Martin said.

“It's going to be an indicator of what we can do, not just on homelessness but on the range of economic support that our community is going to need coming out of this coronavirus,” she said. “This is one the first public tests of what do we want our community to look like and how we should pay for that.”

Budget cuts and layoffs in the city

Opponents are angry that organizers didn't back away once the coronavirus arrived. The measure survived two legal challenges just as COVID-19 triggered Oregon's stay-at-home order.

Gov. Kate Brown last week asked all state agencies to propose ways to cut their budgets by almost one-fifth, and the city of Portland itself is predicting a $75 million drop in revenue. Metro, the agency that referred the measure to voters, itself just laid off more than 700 employees.

“Businesses and households are racking up huge amounts of debt. You have people who aren’t paying their rent and who are delaying their mortgages,” said Eric Fruits, a research director at the nonpartisan Cascade Policy Institute.

The measure's fate, in part, depends on voter turnout. Oregon is a vote-by-mail state, and residents have until 8 p.m. Pacific on Tuesday to turn in their ballots in person. As of Thursday, voter turnout stood at 21%,.