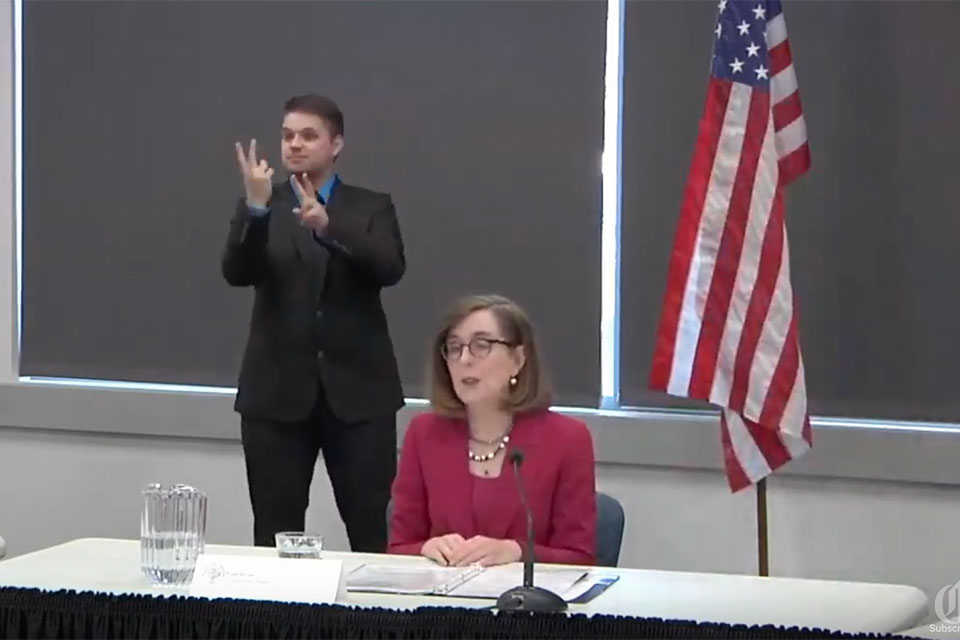 Gov. Kate Brown on Thursday outlined a plan to reopen salons, gyms, barbershops and restaurants in the least-affected — and mostly rural — parts of Oregon after more than a month of a statewide stay-at-home order, but also cautioned that any loosening of restrictions could be rolled back if COVID-19 infection rates surge.

“Physical distancing is, and will remain, a part of our lives for many months to come,” Brown told an online news conference.

She said Oregon hit a record low this past week with fewer than 100 coronavirus hospitalizations across the state.

"We are increasing and enhancing supply chains for personal protective equipment. We still don’t have everything we need, but things are definitely improving,” Brown said.

Brown, who has come under increasing pressure to reopen from rural counties, said that on May 15 she will loosen restrictions statewide on day cares and on retail shops that were previously closed, including furniture stores, boutiques, jewelry stores and art galleries.

Counties that have very small numbers of coronavirus cases and that have seen declining infection numbers can also apply to reopen beauty salons, gyms and bars and restaurants for sit-down dining on May 15 with a number of rules and limitations, she said. Those areas can submit their plans to the state for approval starting Friday and must also have a system in place for contact tracing for people who become infected and have isolation facilities lined up for homeless residents who have no way to observe a quarantine order.

Limits on the number of people in public gathering in counties that qualify would also increase from 10 to 25.

Rural counties in eastern Oregon may be ready to meet the criteria, but Marion County and the Portland metropolitan region are still weeks away, said Nik Blosser, Brown’s chief-of-staff. State health authorities will be monitoring infection rates closely and will take action if they can't trace the origins of at least 75% of new infections or if the number of new cases or hospitalizations increase for seven consecutive days, he said.

Brown's emergency executive order remains in place until July 6. Oregon is currently under a statewide stay-at-home order and schools are closed through the end of the school year. Restaurants are allowed to offer take-out or delivery service only and most retail, with the exception of grocery stores, pharmacies and other essential business, are closed.

“If there’s 20 new positive cases and they’re all tied to one known thing, that’s a very different situation than if they just pop up and we don’t know where they came from,” he said of new cases. “Rolling things back is still certainly on the table.”

Counties that wish to reopen must also coordinate with other counties in their region to ensure that there is enough supply of personal protective equipment at the regional level and that there is enough hospital bed capacity to absorb a 20% surge in admissions from COVID-19, according to the plan. The state is already divided into seven health regions that coordinate on public health issues.

Counties that receive permission to partially reopen on May 15 must wait 21 days before applying to enter the second phase. At that point, those counties could further expand the number of people in gatherings, allow some office work and start allowing visits again to group care settings such as nursing homes and prisons. Details on the second phase are still being worked out, Blosser said.

Brown asked those planning large gatherings, such as concerts, festivals, sports games and conventions, to cancel or significantly modify plans for anything scheduled through at least September.

“They won’t be possible until there’s a reliable treatment or vaccine,” Blosser said. “We'll give guidance on large events happening later in the year this summer.”

As of Wednesday, Oregon had recorded 115 deaths from COVID-19 statewide and 2,916 confirmed cases.