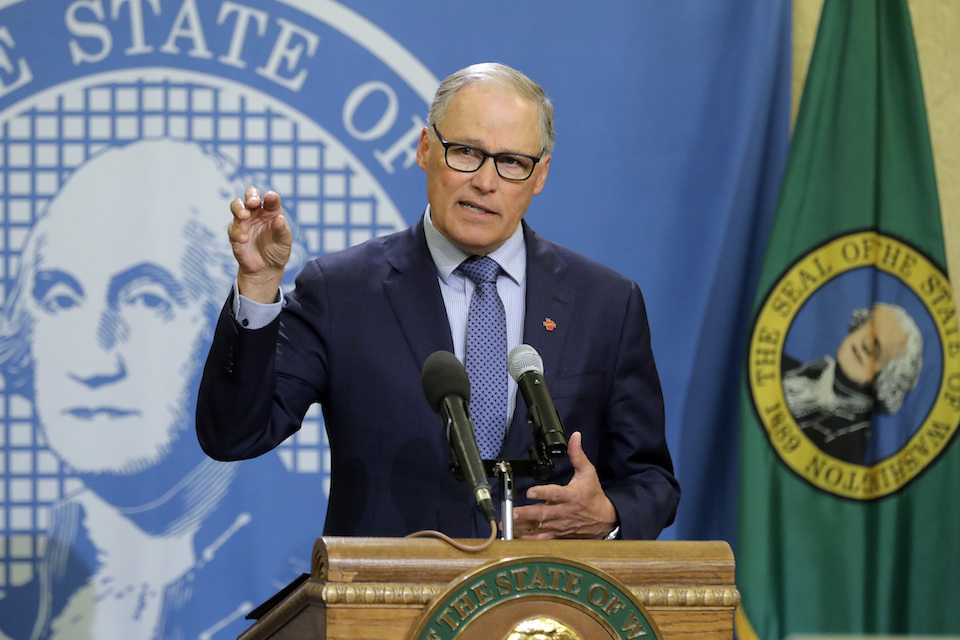 OLYMPIA, Wash. (AP) — Washington Gov. Jay Inslee announced Friday that the state's coronavirus stay-at-home order would be extended through at least May 31 and said there will be a four-stage phase in for lifting of restrictions, starting with allowing retail curbside pickup, automobile sales and car washes by mid-May.

“This remains a very precarious situation and we cannot be lulled into some sense of relief or thinking that we’re out of the woods,” he said.

There will be a minimum of three weeks between each phase, though Inslee said some counties with lower numbers of cases and deaths may be able to open parts of their economy sooner if approved by the Department of Health.

Ten counties are able to apply for the variance from Inslee's order now, and additional counties acould be added in the coming weeks.

Parks open for day use and surgery resumes

Since last Friday, Inslee has announced the easing of some restrictions, including the resumption of existing construction projects and allowing day use activities at state parks and some outdoor recreation like hunting, golfing and fishing to start next Tuesday.

Earlier this week, he said some non-urgent surgeries could also resume.

The Democrat said the first phase implemented this month would also allow drive-in spiritual services with one household per vehicle.

Inslee said while more outdoor activities will start next week, the ban on large gatherings will remain in effect.

Gradual opening up in four phases

The next phase would allow camping, and new construction, as well as in-store retail purchases, with restrictions.

Barber shops and salons could also reopen at that time, and restaurants could reopen at half capacity and table sizes limited to five.

The third phase would expand group gatherings to 50 or less, including sports activities, and would allow restaurants to increase capacity to 75 percent.

Gyms and movie theaters could reopen at half capacity, but nightclubs and entertainment venues will still remain closed during this phase.

During the last phase, most public interactions would resume, with social distancing remaining in place for high-risk populations, with bars, restaurants and entertainment and sporting venues returning to their maximum capacity.

Inslee has said several elements have been at play in his decision making, and that all of them need to see reduced risk: disease activity, health care system readiness, testing capacity and availability, an increase in case and contact investigations once a case is confirmed and risk to vulnerable populations, like those in assisted living facilities.

He said while there is continuing evidence that the spread of COVID-19 has been suppressed he urged caution to moving to lift restrictions too quickly, and said officials will look at how the state is faring after each phase, and said the three week suggestion is a minimum. Inslee said that cities and jurisdictions can take more strict action that what is mandated under the state order based on public health needs in their individual areas.

“I have said that our return to normal will still not look the way they did before this virus hit us until we have pharmaceutical interventions such as a vaccine," Inslee said. “No one knows when that is going to happen.”

The governor’s office said it was reviewing the case. Inslee’s actions appear to fall within the emergency powers delegated to him by the Legislature. The Seattle Times reports that the lawsuit is the second legal challenge Inslee is facing by a Republican politician.

In a statement, Sen. Mark Schoesler, the Republican minority leader, criticized the governor’s plan, saying that more businesses could follow the steps grocery stores have taken to reopen their doors quickly, writing that many employers are being forced “to remain on a path that could easily end in their failure.”

Inslee acknowledged the frustrations he's heard, but said that most Washingtonians “understand that if we stick together for a while longer we won’t lose all the gains that we’ve already made.”

Washington state saw the nation's first confirmed COVID-19 case in January, as well as the first deadly cluster, at a Seattle-area nursing home. Inslee in March was among the first governors to order sweeping social distancing restrictions.

More than 14,600 people in Washington state have tested positive for the virus, which causes mild to moderate symptoms in most patients, and at least 824 people have died. While the vast majority recover, the coronavirus is highly contagious and can be spread by those who appear healthy and can cause severe illness and death in some patients, particularly the elderly and those with underlying health conditions.