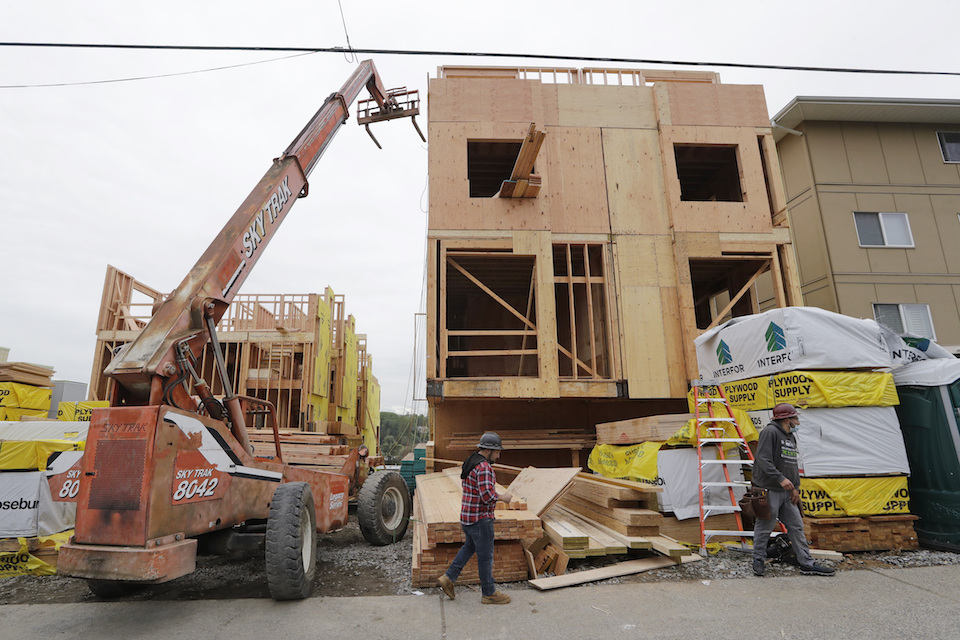 OLYMPIA, Wash. (AP) — Thousands of construction workers could soon be back on sites across the state to finish existing projects after Washington Gov. Jay Inslee on Friday announced a plan that allows those jobs to resume as long as strict coronavirus social distancing protocols are in place.

Before work on the projects can resume, all contractors must develop and post a plan at each site that addresses use of personal protective equipment like masks and gloves, on-site social distancing and sanitation. In addition, a site-specific supervisor will be designated to enforce the safety plan to monitor the health of employees, and employees will undergo training on the new policies.

“If it can’t be done with social distancing, then it cannot proceed at this time,” Inslee said, and he warned sites will be shut down if they do not follow the protocols once they resume work.

Construction was halted under the stay-at-home order and closure of non-essential businesses that Inslee ordered last month. There were some exemptions, including projects related to health care, energy, and publicly financed low-income housing, as well as emergency repairs.

Inslee had been working with a construction work group in previous weeks, including the Building Industry Association of Washington, the Washington State Building and Construction Trades Council and the Association of Washington Business, to come up with the plan announced Friday. He said he plans to convene similar work groups with other industries to discuss a path to lifting restrictions in other sectors of the economy.

Mark Riker, executive secretary of the Washington State Building and Construction Trades Council, said the groups put aside their differences to focus on worker safety and restarting construction as soon as possible.

Riker later said the governor’s action means thousands of workers will be back to work, though he said it’s hard to quantify right now since projects must first show they meet the terms before they can restart.

Greg Lane, executive vice president of Building Industry Association of Washington, said that he believed some work could start as early as Friday afternoon, with more over the weekend and into next week.

Earlier this week, Inslee had said the state will not be able to lift many of the stay-at-home restrictions implemented to fight the coronavirus by May 4 — the date through which the current directive is currently in place — but that he hoped health modeling in recent days would allow resumption of some activities, including residential construction.

He said that while additional decisions on elective surgery and outdoor recreation will be made in the coming days, “we cannot say when other businesses will reopen.”

Inslee has said that while the state was making progress in slowing the spread of the virus, caution still must be exercised.

“We can’t make decisions based on arbitrary dates, we have to make it based on real data,” he said. “It would be way too dangerous and all of our data shows that if we did this today, this virus would return with a vengeance.”

More than 12,970 people in Washington state have tested positive for the virus and at least 723 have died. The virus causes mild to moderate symptoms in most patients, and the vast majority recover. But it is highly contagious and can be spread by those who appear healthy and can cause severe illness and death in some patients, particularly the elderly and those with underlying health conditions.