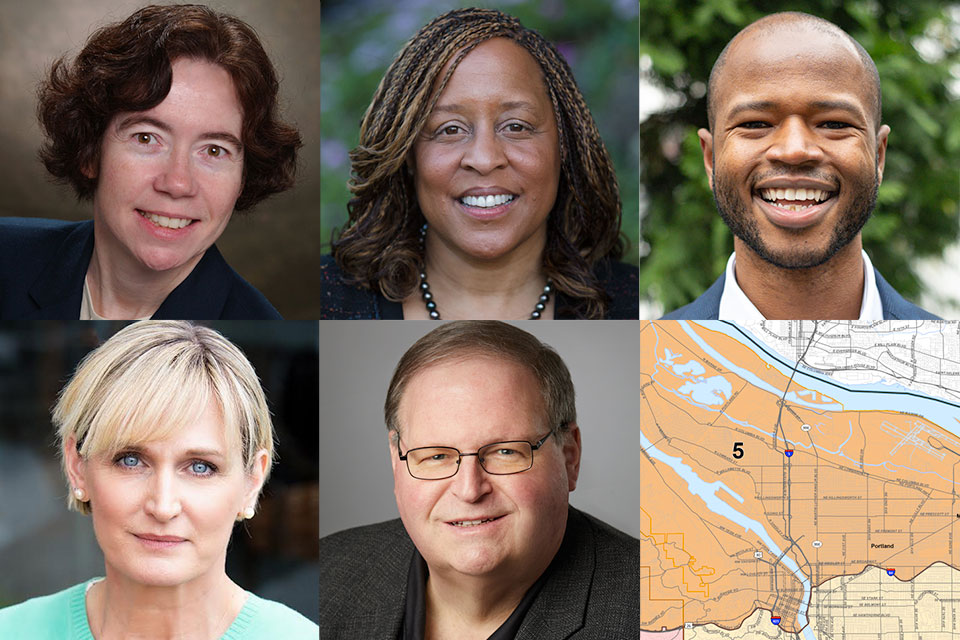 Five candidates are running to represent North and Northeast Portland in the only directly elected regional government in the country.

Portland Metro Councilor Sam Chase is vacating his position in Metro District 5 to run for Portland City Council in the May 19 primary. His potential successors include a seasoned former state legislator, a patent lawyer, as well as racial justice and environmental activists.

The Skanner spoke with each of the candidates about their priorities, and how they intend to serve the needs of Portland’s communities of color.

After representing Portland in the state House of Representatives for 12 years and serving as House Majority Leader for two, Mary Nolan left the capitol in 2012 for a city council run, where she was narrowly defeated by Amanda Fritz. Since then, she has served as the interim executive director of Planned Parenthood Advocates of Oregon and led business and community development at FamilyCare, a Medicare and Medicaid managed-care provider based in Portland.

“I grew up in a family engrained in community service and social justice,” Nolan told The Skanner.

“I want to make Portland a national model for urban living that is equitable, climate-friendly and kind.”

Nolan described how her work in the healthcare field furthered her drive for coalition-building.

“At Planned Parenthood, I worked with Urban League, APANO, Latino Health Coalition, and the Muslim Education Trust to support them in their priorities, both in healthcare and human rights,” Nolan said. “At FamilyCare, I supported communities of color in accessing new opportunities for healthcare coverage under Obamacare, and engaged leaders at Asian Health Services, Oregon Commission on Black Affairs, Coalition of Communities of Color,  Oregon Health Equity Coalition and Self Enhancement Inc. to assure that primary healthcare is available in settings and languages that welcome new patients, support diverse family structures and empower individuals to make their own health choices.”

Calling Metro “the glue that holds the entire region together,” Nolan added: “I want to make sure we decide where to invest based on the need and historical issues of inequity that Metro has an opportunity to fix, to reverse, and not just say, ‘Ok, we’re going to forget about history. We’re just going to go forward based on population.’”

Patent lawyer and business consultant Karen Spencer is one of two District 5 candidates to have completed Emerge training for progressive women eyeing political office, inspiring her to combine her background as an entrepreneur with her involvement in a number of local committees, including Metro’s Nature in Neighborhoods Capital Grants Committee, the Portland Utility Board and Oregon’s Youth Development Council.

Spencer says she intends to focus on housing, transportation and environmental stewardship--and the issues of equity inherent in each.

“I believe it is fundamentally important for people of color to have a seat at the table,” Spencer told The Skanner.

“And then once in the seat, to speak up about issues that impact communities of color.”

She says that when she became partner at her law firm, she was then the sole African American woman partner in Silicon Valley. For nine years, she was the only woman and the only minority to serve as lead counsel within the U.S. golf manufacturing industry.

“As someone who has been impacted by institutional racism, racist attacks, implicit bias and microaggressions, I want to champion policies that build a diverse workforce for women, communities of color and veterans within Metro,” Spencer said.

She also wants to preserve that diversity region-wide.

“Without proactive leadership, I am concerned that the COVID-19 crisis will accelerate (displacement) for the African American community and other communities of color,” Spencer said. “I will be a champion for the proactive measures to fund anti-displacement strategies and projects in the proposed T2020 initiative. As our region grows and we invest in development projects, we can and should proactively implement strategies to prevent displacement. In that way, long-term residents of our predominately African American neighborhoods should reap the benefits of the new investment.”

“I’m running for Metro Council because I don’t want Portland to become just another overpriced West Coast city,” Whitten told The Skanner. “We are facing a crisis in our region: Economic inequality is growing, our climate emergency threatens the quality of life we hold so dear, and our communities are quickly diversifying while our institutions and policies stagnate and leave people behind.”

Having experienced homelessness in his youth, Whitten says he offers “both lived and executive” leadership.

“When I vote on issues, I am able to connect closely with the lived experiences of voters, because as a renter, Black, and working person, I too share those lived experiences,” Whitten said. “I’ve served on government committees for the Portland Bureau of Transportation, Trimet, and Multnomah County. I’ve been involved in passing landmark legislation, serving as a founding member of the Oregon Inclusionary Zoning Coalition, which worked to lift the statewide preemption on inclusionary housing in 2016.

And I’ve been a fierce advocate for inclusion and collaboration.”

“I want to work with Metro to develop a region-wide gentrification and displacement index, similar to the 2018 tool developed by the City of Portland and Dr. Lisa Bates,” Whitten said. “The risk of displacement a community faces should be matched with a comparable amount of resource investment and zoning policy.”

A former athletic marketing executive-turned-environmental activist, Mary Peveto founded the nonprofit advocacy group Neighbors for Clean Air initially in response to frightening air quality reports in her community. Her interest in quality of life issues led her to the Emerge program, where she trained to run for office and found a fit in regional government.

“The strength of Metro is that it’s not a legislative job, it’s more a board of directors,” Peveto told The Skanner. “Where else can you show a government that’s as deeply enmeshed with the economic reality that the community is facing?”

Her resolve has only strengthened since the COVID-19 outbreak, she said.

“I am deeply concerned about the health, societal, and economic impacts of it for our region, and the greater society,” Peveto told The Skanner. “My strong background as a coalition builder and community activist offers a pragmatic vision for the region, and provides proven leadership to get there. Metro is the right place to scale up local solutions to big problems, from air quality to ensuring everyone can support their families and live well.”

In addressing economic inequity, Peveto believes Metro should start with its own employees.

“In the Fall of 2019, the Oregon Convention Center management commissioned a cultural assessment of its setup operations team,” Peveto said. “ It identified that there are significant issues around equity in the workplace for people of color, (who) believed their concerns are not taken as seriously as non-POC workers, that they are held to higher standards than their peers and because of that experienced different levels of accountability and they experience increased supervision while working. I will work with all facility management to increase their accountability to the Metro council to ensure these disparities are eliminated.

Metro must provide a safe and equitable work environment for all its employees.”

Citizen activist Chris Smith has long had a working interest in how Metro residents get around, and at what cost. The Portland Planning and Sustainability Commission member says that climate change spurred his decision to run.

“I would like to use Metro as a platform to significantly reduce vehicle miles traveled in the region,” Smith told The Skanner. “I will advocate for impactful policies, like congestion pricing, while at the same time making sure that those policies improve equity--for example, finding ways to funnel congestion pricing revenue to transit operations. We also need to prohibit expansion of—and plan to retire—the fossil fuel infrastructure in the region.”

“The coronavirus crisis has demonstrated that when prodded into action we are capable of making big change,” Smith said. “We need that kind of change for these two slower-moving crises.”

Smith said he aims to create “sustainable and equitable urbanism.”

“I try to be eternally cognizant of the privilege that I enjoy as a White male,” Smith told The Skanner. “I’ve had the opportunity to be part of the process of crafting both the Portland Plan and Portland’s new Comprehensive Plan, both of which are centered on equity, and point to a race-first approach to addressing equity--as does Metro’s equity plan. Over the development of these plans I’ve collaborated successfully with groups like (Organizing People/Activating Leaders), (Asian Pacific American Network of Oregon), Verde and the Coalition of Communities of Color.

I’ll continue to work to involve front line organizations in decision processes and center racial justice as a core value in Metro’s work.”