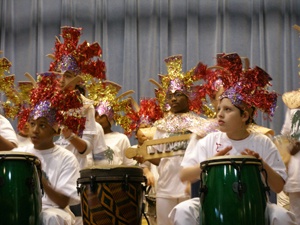 Without a music program to speak of at Woodlawn School, Chukinho "Chuk" Barber had a tough road ahead.
His students had little, if any, musical training; many come from economically disadvantaged households; and some had social or behavioral problems before they arrived in Barber's samba class. But since September, Barber has coaxed the diverse group of sixth and seventh grade students into an efficient and booming samba machine.
"It's something they can feel," he said after the band performed for the first time in front of the entire school. "They can feel the power."
A samba teacher for 8 years in New Orleans, and a virtuoso who has played alongside some of that city's most accomplished musicians, Barber was forced to move from his home after Hurricane Katrina devastated the city. In September, he accepted an artist-in-residence position at Woodlawn to start a samba program. He salvaged instruments for a 40-strong band of students from his flood-ravaged home.
According to teacher Tami Edwards, the students are dedicated to playing with the band. They've had to give up popular electives such as physical education, but they've also gained other skills – the fun of playing with other musicians, self-discipline and the magic of being able to create music, instead of just being passive listeners.
Edwards says a number of kids who were about to travel down the "wrong path" instead developed into leading band members.
"It really shows what music and electives can do," Edwards said.
The students say they look forward to samba class  — even if the homemade costumes they wear for performances aren't any middle schoolers idea of "cool".
"I like to drum," said sixth-grader DJ Gonzalez. "The costumes are too glittery and girlish."
"The band is tight," said seventh-grader Austin Nelson, who also loves to drum.
For Barber, who admits he rules his students with strict discipline, the class is an opportunity to teach students of color that being a rapper or basketball player is not the only way to escape poverty. He would like to see the small samba classes transformed into a full-fledged samba school.
"There are so many different facets of the African," he said. "It's appreciating who we are in as many ways as possible."
Music is not the only thing Barber is teaching his students. He is teaching them to speak Portuguese and to understand the history and geography behind samba music – which couldn't have developed without the Africans who were forced into slavery in Brazil. Unlike American slaveholders, Brazilian slave owners allowed their African captives to continue to play their drums, which eventually morphed into the form of music known as samba. Barber named the Woodlawn School's band after Zumbi, a legendary leader of escaped African slaves who battled the Portuguese military for his people's freedom. With that in mind, Barber says it's important for African Americans to know their musical roots.
"African music should be handed down to African children by Africans," he said.

Barber's program isn't the only one in Portland teaching children the value of samba. The Ainsworth Junior Escola, Ainsworth School's samba program, was founded in 2000 and is taught by Pink Martini member and Lions of Batucada leader Brian Davis.
"… it is a large ensemble endeavor," Davis said. "One that succeeds only if all the parts lock together, both in a musical sense, and in the shared community effort required to create a cohesive and creative result. Great work for kids to absorb."
Much like Barber's program, Davis teaches the history, language and geography of samba. He also brings in professional samba musicians from Brazil and has a Brazilian native teach samba dance.
Eventually, Barber would like to turn the Woodlawn program into a multi-faceted samba school that could help unite the community around samba, soccer and dance. As soccer is an integral part of samba culture, Barber toured with Brazilian's championship soccer team as part of their "Bateria" or samba band.
In Brazil, race lines are not as clear as they are in America. And Barber thinks music could help blur them here in Portland.
"Brazilians have that unity down," he said.
He said he's been in talks with the school's principal, Lemil Speed, about returning next year once this year's artist-in-residency funding has expired. Zumbi's Kids will perform next on Feb. 29 at the Skyline School.