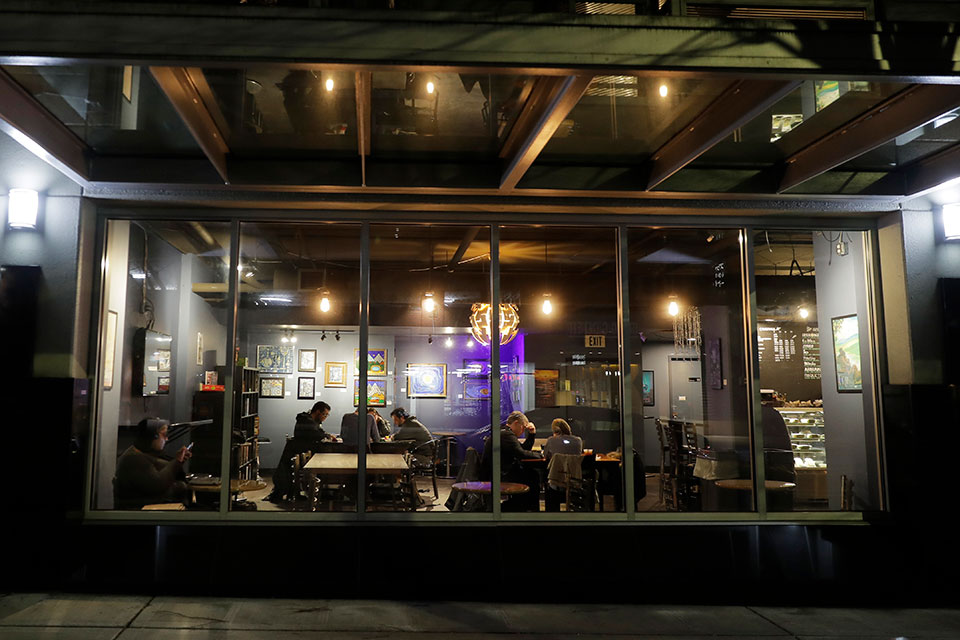 OLYMPIA, Wash. (AP) — Washington Gov. Jay Inslee on Monday will order the temporary statewide closure of all bars, restaurants, entertainment and recreation facilities to temporarily close to fight the spread of COVID-19 in the state with the most deaths in the U.S. from the disease.

In a statement Sunday Inslee said the ban, to be issued via emergency proclamation, wouldn't apply to grocery stores and pharmacies and that restaurants could continue take-out and delivery services. 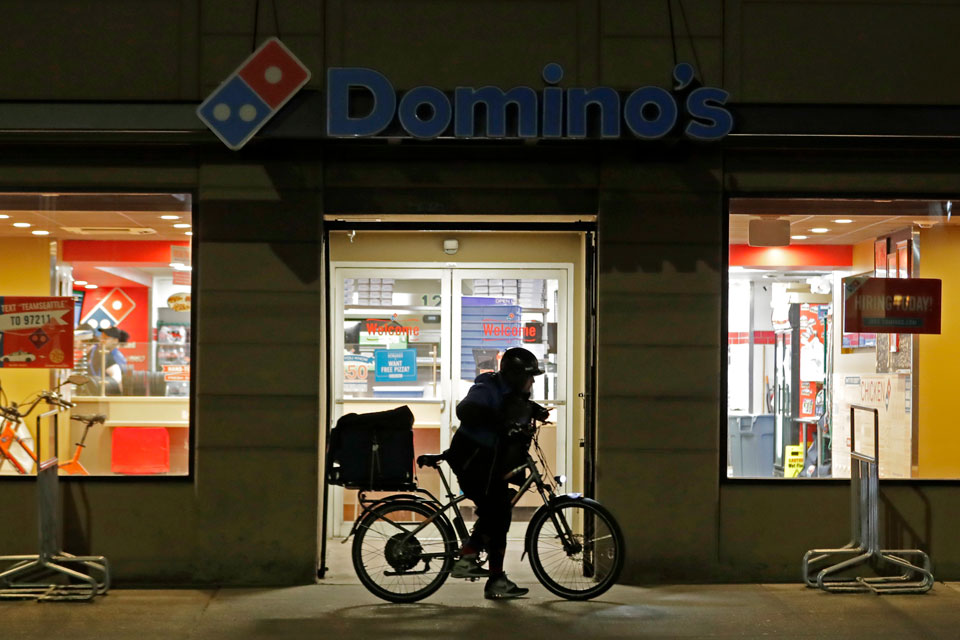 A delivery driver leaves a Domino's Pizza restaurant in downtown Seattle on a bike, Sunday, March 15, 2020. Washington Gov. Jay Inslee said Sunday night that he would order all bars, restaurants, entertainment and recreation facilities in the state to temporarily close to fight the spread of the COVID-19 coronavirus. Inslee said that restaurants could continue take-out and delivery services. (AP Photo/Ted S. Warren)No time frame was given on how long the restrictions will last. A spokeswoman for Inslee said they would take effect at 12:01 a.m. Tuesday. The governor also revised his ban on events to prohibit gatherings of 50 or more people. Previously the size limit was more than 250.

"These are very difficult decisions, but hours count here and very strong measures are necessary to slow the spread of the disease. I know there will be significant economic impacts to all our communities and we are looking at steps to help address those challenges," Inslee said.

Other governors have instituted such measures. California Gov. Gavin Newsom on Sunday called for all bars, wineries, nightclubs and brewpubs to close in the nation's most populous state. The governors of Ohio, Massachusetts and Illinois also ordered bars and restaurants to shutter.

King County Executive Dow Constantine issued a start statement Sunday night: "We are at a critical moment in this crisis," he said. "It is time, right now, for people to assume that they and everyone they meet is infected, to avoid any unnecessary interactions that might lead to further infection, and to wait and monitor to see if they have in fact been infected so that they can isolate and recover without presenting a risk to others.

"Go to work if you must. But hunker down if you are able." 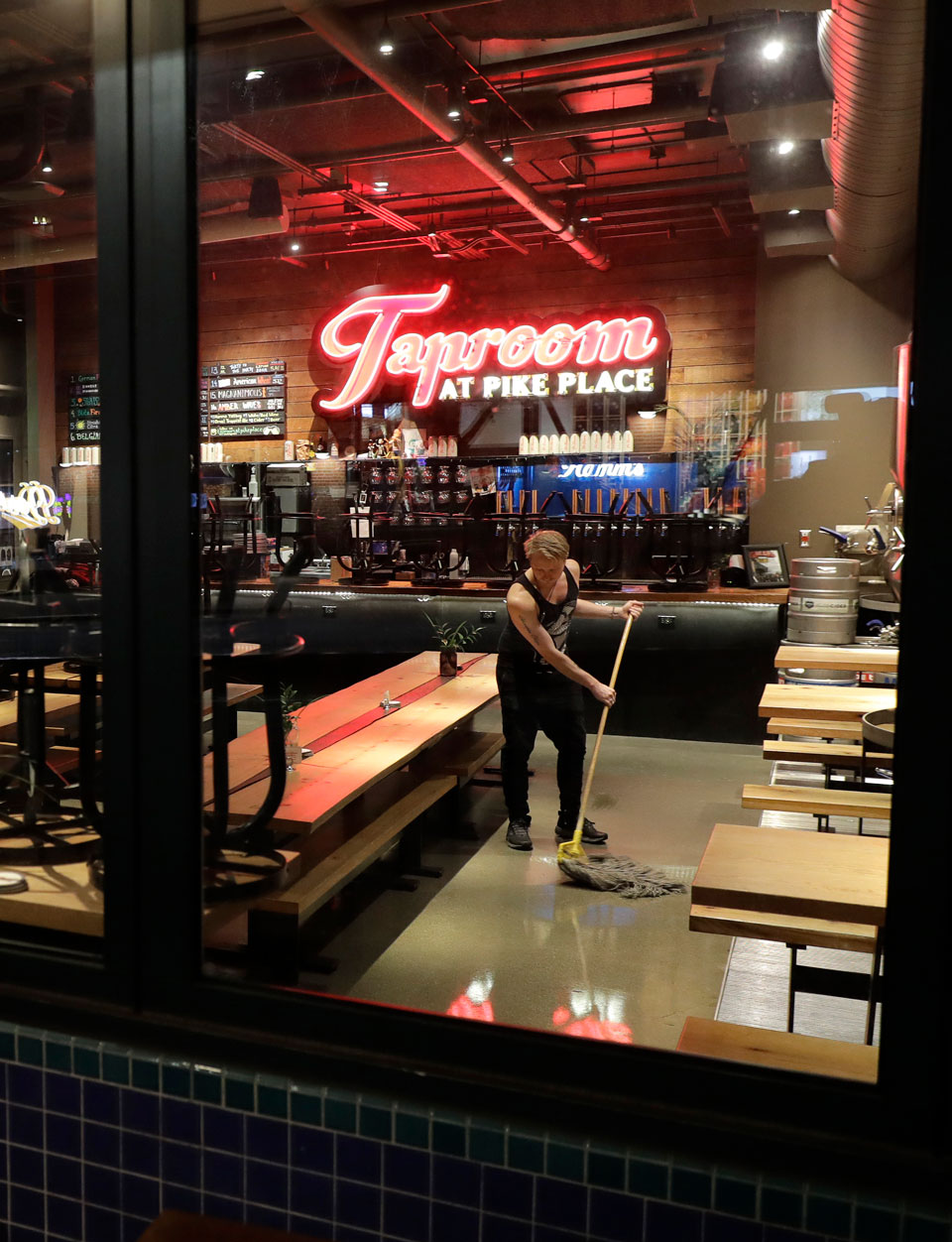 Tyler Baldwin mops the floor after closing for the night at the Taproom at Pike Place, Sunday, March 15, 2020 where he works as a bartender in Seattle. Washington Gov. Jay Inslee said Sunday night that he would order all bars, restaurants, entertainment and recreation facilities in the state to temporarily close to fight the spread of the COVID-19 coronavirus, as Washington state has by far the most deaths in the U.S. from the disease. Baldwin said he closed more than an hour early Sunday after he heard the announcement. (AP Photo/Ted S. Warren)That makes 29 coronavirus-related fatalities linked to the nursing home. There are more than 750 confirmed cases statewide. The Washington state Department of Health says that 8% of the more than 9,400 people who have been screened for COVID-19 tested positive.

For most people, the new coronavirus causes only mild or moderate symptoms, such as fever and cough. For some, especially older adults and people with existing health problems, it can cause more severe illness, including pneumonia.

The vast majority of people recover.

Tyler Baldwin, a bartender at the Taproom in Pike Place Market in Seattle, was mopping up Sunday night after Inslee's announcement about the pending closure of bars and restaurants.

Baldwin, 29, said the closure would be hard.

"Basically close down early so I can go home and start figuring out unemployment, food stamps, really whatever the next step to keep myself afloat is," he said.

Baldwin said there had been fewer and fewer customers in his bar the past few weeks, which is located in one of Seattle's biggest tourist attractions.

"It's shocking, in a way. I'm still in the throes of processing it.

"It means I need to find a way to support myself from home," he said.