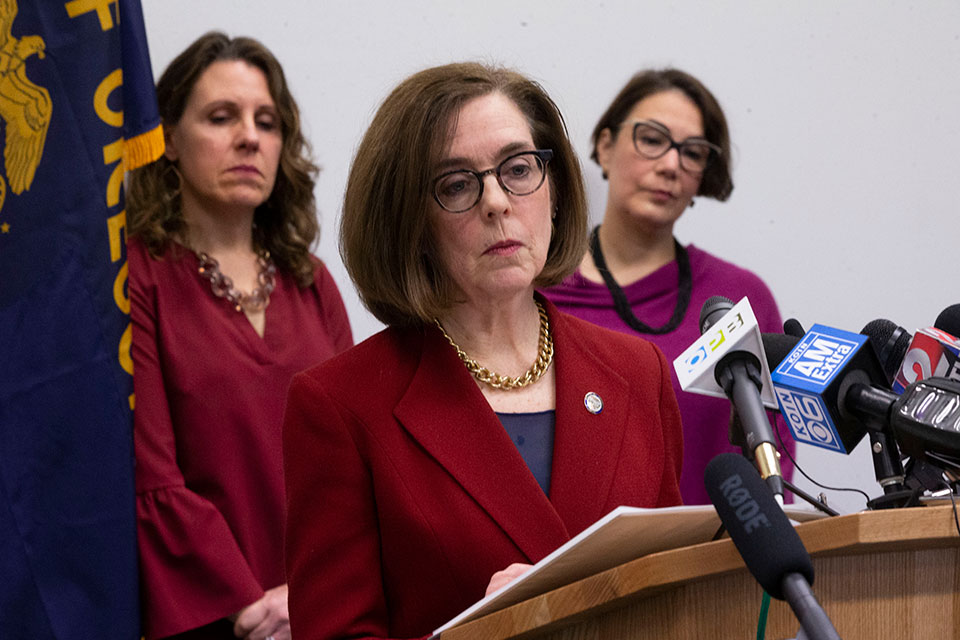 SALEM, Ore. (AP) — Hundreds of doctors from around Oregon signed a letter Friday to Gov. Kate Brown demanding more resources and help to combat the spread of the new coronavirus.

The letter was made available online Thursday for doctors to sign and had 410 signatures by Friday morning. The letter acknowledges that Brown is in a difficult situation managing the crisis but said they are unequipped to handle the influx of coronavirus patients that could come.

"We see ourselves making decisions in the next two weeks on who will live and who will die because we don't have resources sufficient to care for them," the letter said.

"We have heard the stories second- and farther-hand from China and Italy and have no reason to think Oregon won't suffer the same fate. We truly must flatten the curve of the impact on our health care system."

The doctors ask for a number of immediate changes and policies, including creating a statewide call center, a helpline for frontline medical workers and an ethics team that would draft guidelines for doctors who may have to decide how to best use limited resources for patients.

The letter also suggests a tracking system for those in self-quarantine, taking over hotels to get the homeless population off the streets to better control the spread of the virus and separating nursing care residents into separate facilities for those who are sick and those who have tested negative for the new coronavirus.

"There are those who would judge you as being embarrassingly over-prepared or tragically under-prepared. We know which side you want to be on," the letter read.

Brown's office did not immediately respond to emailed requests seeking comment on the letter. She was expected to speak to reporters later Friday.

Brown ordered schools statewide closed for two weeks starting Monday and has said Oregon should brace for thousands of coronavirus cases. Schools will reopen March 31 due to staffing challenges and health concerns.

She has also banned all gatherings of more than 250 people statewide for four weeks to try to stop the spread of the virus.

The Trump administration has informed Brown that it will send a small fraction of the personal protective equipment she sought for the state's front-line medical workers amid the outbreak, her chief of staff, Nik Blosser, said. And much of that equipment is past its expiration date.

Brown wrote to Vice President Mike Pence, President Donald Trump's point man on fighting the virus, on March 3, saying Oregon needs 400,000 N-95 respirator masks and the same number of gowns and gloves and disposable protective suits, plus up to 100 ventilators in case the virus spreads widely in the state.

U.S. government sending a fraction of what was requested

The U.S. Department of Health and Human Services and the Centers for Disease Control and Prevention advised the governor's office that Oregon will receive 36,600 N-95 respirator masks, 87,000 surgical masks, 16,700 face shields, 13,700 surgical gowns and 48,500 gloves. No ventilators were listed.

The state currently has 688 ventilators, according to the Oregon Health Authority.

"We are being told that while the equipment is capable of being used for COVID-19 response, what we would receive is well past expiration date and wouldn't be suitable for surgical settings," Charles Boyle, the governor's press secretary, said in an email.

Boyle added: "Without additional PPE, our health care workers could be faced with difficult choices in the event of a significant outbreak, and social service workers could be left without enough equipment as well."

The CDC did not immediately respond to a request for comment.

Appearing at a news conference, the governor said she and other state officials are also worried about testing capacity, which a health official put at around only 80 per day, and said "the federal government is the only one who can expand our testing capacity."

The Oregon Health Authority later Thursday announced six more people, all at least over the age of 54, have tested positive for the virus, bringing the number of cases in the state to 30. They along with two others diagnosed Wednesday are residents of the Oregon Veterans' Home in the small town of Lebanon, Oregon.

Staffers wearing gowns, masks and other protective equipment were caring for the two residents in their 80s. Officials said the six new positive tests were considered linked to the two cases, but the exact source of their exposure is unknown.

The facility in west-central Oregon has 151 residents and 225 workers. A strike team from the Oregon Health Authority arrived there Wednesday night and began collecting samples for COVID-19 testing beginning with "high-risk" individuals — those with any indication of respiratory illness, compromised immune systems or underlying conditions, the Oregon Department of Veterans' Affairs said Thursday.

There could be 150 to 250 cases that haven't been diagnosed, and it could grow to over 75,000 cases by mid-May unless action is taken, state health officer and epidemiologist Dean Sidelinger said.

And the Oregon Department of Corrections said it was not allowing inmates at its 14 prisons to have visitors due to the COVID-19 outbreak. The department said Thursday it so far has no known cases.

For most people, the coronavirus causes only mild or moderate symptoms, such as fever and cough. For some, especially older adults and people with existing health problems, it can cause more severe illness, including pneumonia. The vast majority of people recover within a few weeks.