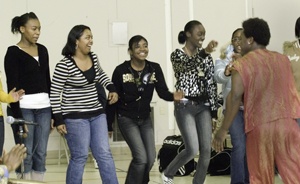 This summer, the first group of students to attend St. Andrew Nativity Middle School will graduate from high school — and all but one plan to continue their education, with most headed to a university.
Perhaps it isn't news that graduates from a private Catholic school make it into higher education, but St Andrew graduates are not typical private school students. And St Andrew is not a typical private school. As Portland's only tuition-free, private, Catholic middle school it serves low-income students.
All of St Andrew's students qualify for free or reduced lunch, and when they enter the school in sixth grade most students test at a third or fourth grade level.
"This first group was very unique," said Natasha Butler, graduate support director. "Anytime your building adds a new program, you think it's all together until the doors open."
After middle school, that first group of students – the class of 2001— parted ways. Eight students attended De La Salle North, Jesuit and St. Mary's, which all are Catholic High schools, and the rest went on to neighborhood public schools, such as Parkrose, David Douglas and Jefferson High. Butler estimates that 50 percent of these students would have dropped out if it weren't for St. Andrew School.
"We finally made it," said Raphiel Lambert, a St. Andrew first-year alumnus and Jesuit senior who is planning on attending Boise State. "It's nice to see us all graduating and doing well."
Ramazan Muhammed, another first-year alumnus and Jesuit senior, said he was behind in public school before entering St. Andrew. The Rwandan native had recently moved to the United States and he said the school helped him catch up. Despite being a Muslim, Muhammed said he was treated the same as everybody else at the school.
"The togetherness of the community was great," he said. "Everybody was so close."
St. Andrew added a new grade level every year for the first three years. With a capacity of 60 students – currently housing 57 students – the school is able to maintain a ratio of about 12 students for every one teacher, says Father Jeff McDougal, the school's principal. They are discussing the possibility of adding a 5th grade class as well. About 66 percent of students are non-Catholic, the vast majority are African American or Latino, and many come from single-parent households.
Bringing students up to grade level is a challenge, says McDougal. Unlike public school, St. Andrew's students have a mandatory study hall from 3 to 5 p.m., where they can study and complete homework without any distractions. And if that wasn't enough to turn students into dedicated scholars, St. Andrew requires all the students to attend for half the day through July – although they don't have to wear uniforms for summer school.
Seven years on, McDougal says this fall was the smoothest start they've had yet. In the first couple years the administration had to focus on practicalities, like filing systems. Now the school is looking at expanding services.
"When you get the basic stuff in place, you can look at other needs," McDougal said. The school is going to begin offering parenting classes to help parents deal with their children.
Butler says teachers and administrators have made many changes along the way. Early on, the school aimed to groom students for private high schools. Now, students are encouraged to attend the high school that will fit their needs. Certainly, the first class to attend St. Andrew faced more challenges than most. Butler says the school has that class to thank for building relationships with other Catholic schools and for having the strength to stick with a new school with high academic standards. They also had to adjust to leaving friends behind in neighborhood schools.
But St Andrew students benefit from several advantages, says Butler. Teachers are able to spend more one-on-one time with students, and volunteers offer academic support during study hall.
St. Andrew is looking for applicants. Unlike some private schools, St. Andrew has had more available slots than students willing to fill them. Since opening, the school has relied mainly on word-of-mouth to reach parents. Now, McDougal concedes, community outreach might be in order. The school also is looking for volunteers and donors. Connor Savage, development director, said 80 percent of funding comes from individual contributors, the majority of whom start out as volunteers.