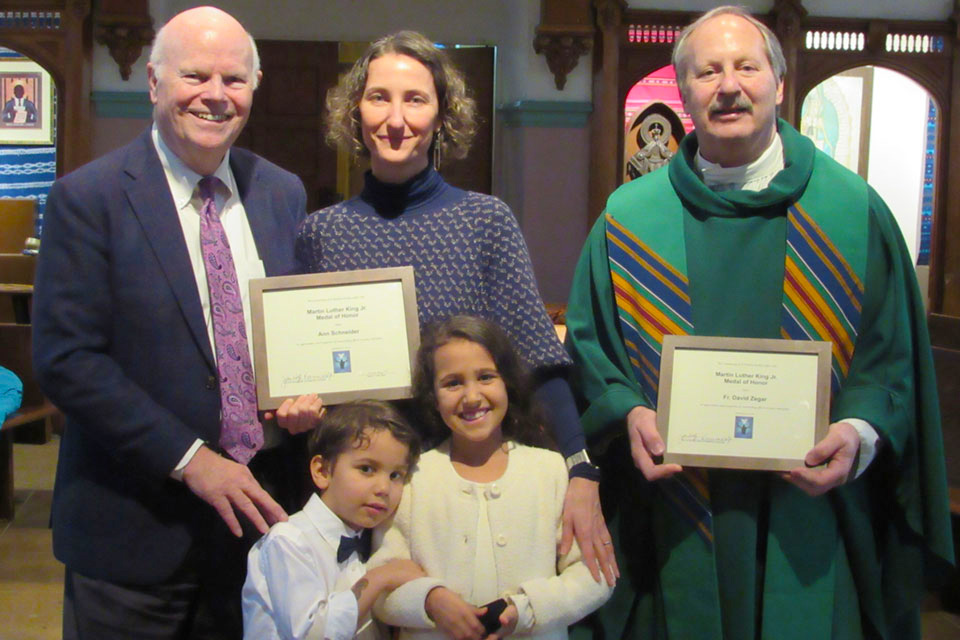 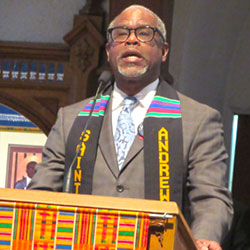 Tony Jones was the Master of Ceremony at the St. Andrew Martin Luther King, Jr. Awards Event. (photo (photo by Kenyon Wolfe)St. Andrew Catholic Church presented its annual Martin Luther King, Jr. Awards at mass on Sunday, January 19. These awards are given to people whose service embodies the values of Dr. King, who used nonviolence, civil disobedience, and Christian teaching to advance the cause of civil rights in America.

Two awards are given each year: one honors a parishioner for works of social justice in our parish, and another to an individual or group working for justice in the greater metropolitan area.

This year the award for Community Service went posthumously to Ann Herzog Schneider (1947-2019). Ann dedicated her life to the service of others, working with migrant farmworkers in Hillsboro, and with refugee and immigrant job seekers through the Immigrant and Refugee Community Organization (IRCO). With a BA in anthropology and graduate work in linguistics, she taught at the Metropolitan Learning Center (MLC), and she developed the Steps to Success Program for non-native English speakers at Mount Hood Community College. Never fully retiring, Ann most recently worked with international high school students through the Program of Academic Exchange (PAX).

At mass on Sunday, the award was accepted on Ann’s behalf by the Rev. Stephen Schneider, her husband of 49 years.

The Parish Service Award went to Fr. Dave Zegar, who recently celebrated 40 years of priesthood. Since his days at Mt. Angel Seminary, Fr. Dave has devoted himself with creativity and passion to the Hispanic community of the archdiocese. He worked with immigrant advocate Margaret Godfrey to start the Immigration Counseling Service, in 1978, while still in seminary. Ordained in 1979, he served at St. Alexander Catholic Church in Cornelius for his first 15 years of ministry, spending summers visiting among the 50 migrant camps in Washington County. He was appointed pastor in 1981, and Archbishop William Levada later appointed him Episcopal Vicar for Hispanic Ministry.

In 1986, the year that the U.S. extended amnesty to 2.7 million undocumented farmworkers, Fr. Dave continued working on his “day off” with Immigration Counseling Service to help thousands start on the new pathway to citizenship. 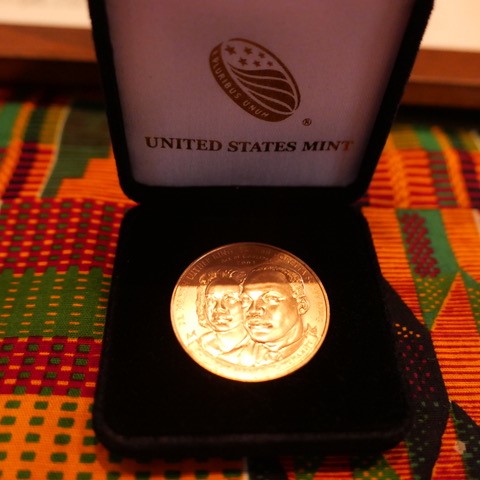 Patrick Elijah presented the winners with certificates and medallions engraved with the image of Dr. King. (photo by Leo Remington) Subsequently assigned to St. Luke in Woodburn (1995-2008) and then St. Peter in Portland (2008-2012), he has worked to build community between English and Spanish masses. Since 2012, he has served as pastor at St. Andrew, where his deep faith and gospel values have been an inspiration to English and Spanish masses alike.

Each year, on the Sunday closest to the national holiday celebrating Dr. King, these awards reassert the parish’s sharing in what he called, in his Nobel Peace Prize acceptance speech, his “audacious faith in the future of mankind.”

Parishioners submit names and a dedicated committee provides the research necessary to choose the honorees and produces the ceremony at Sunday mass. This year John Wolfe co-chaired the MLK committee with his wife, Korinna Wolfe. Tony Jones served as master of ceremonies, and Patrick Elijah presented the winners with certificates and medallions engraved with the image of Dr. King.