The Skanner in Step With Changing Times 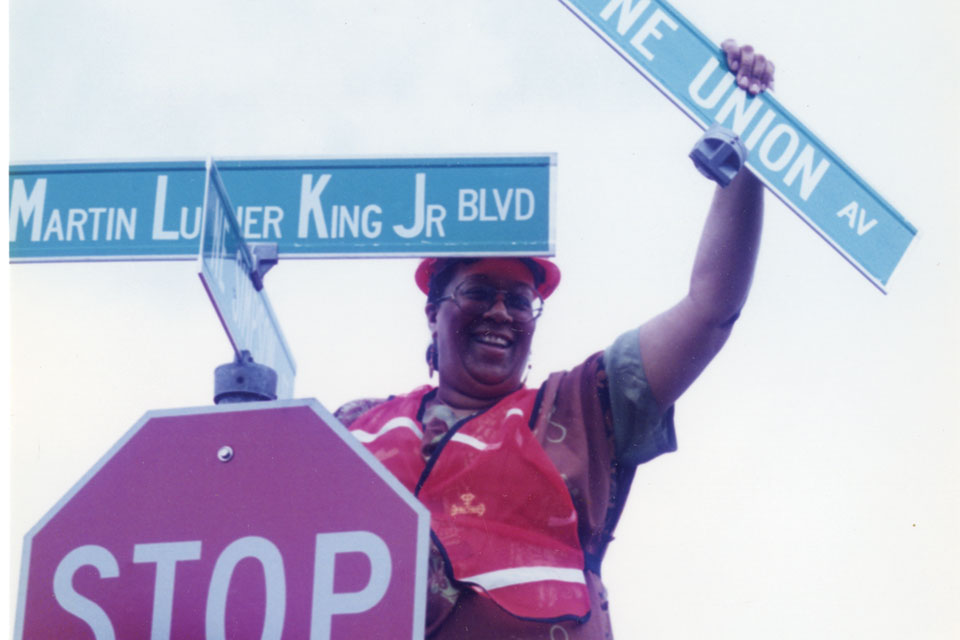 1975! It was the year Stevie Wonder released 'Boogie on Reggae Woman' and KC and the Sunshine Band persuaded us to 'Get Down Tonight'. The nation was dancing to top-40 hits by Gloria Gaynor; the Three Degrees; Gladys Knight; Barry White; Patti Labelle; Minnie Riperton; and Earth Wind and Fire.

But the United States was in the grip of a severe recession, still reeling from the fallout of the Watergate scandal and the disastrous war in Vietnam. Soon Ronald Reagan would challenge Gerald Ford for the Republican nomination. Bill Gates had just decided to name his start-up venture Microsoft.

And in Portland, Oregon, in 1975, an enterprising young man founded The Skanner newspaper. The first issue was published on Oct. 9 of that year.

Originally from St. Louis, Bernie Foster was a veteran recently returned from Vietnam. He became the paper's first photographer, salesman and publisher working tirelessly to build a successful media business, which in the 1990s included two FM radio stations—KEUG, 105.5 in Eugene and KAVA,101.1 in Roseburg.

After seven years the Fosters sold the stations which they had built from the ground up.

Executive editor Bobbie Foster earned her communications degree from the University of Portland and, in 1977, brought to the paper her dedication to excellence and community service. She was committed to furthering equity through education and-- like Bernie--believed the Black press had a responsibility to hold those in power accountable.

The couple founded The Seattle Skanner in 1981, with Monica Foster managing that office in downtown Seattle.

From the start they had an ambitious mission--'Challenging People to Shape a Better Future Now.' But The Skanner's readers were ready for that challenge.

Martin Luther King Jr had been taken from us more than a decade earlier, but his dream burned more brightly than ever.

Portland and Seattle were alive with activists and advocates who were determined to make his dream a reality.

Organizations like the Urban League, the NAACP, the Black United Front and the Albina Ministerial Alliance were leading the charge for change.

And The Skanner was ready to raise these voices to the rooftops.

In 1975, as now, Black communities faced barriers to success. The optimism of the 60s with its landmark Civil Rights Act had been replaced by frustration about poverty, lack of opportunity and the slow pace of progress.

The Bureau of Labor reported unemployment rising to a high of 9 percent nationally. But Black unemployment had soared to 13.2 percent. The Skanner's first front page story "Permanent Unemployment Stalks Blacks," expressed the desperation of a community.

Employment was not the only arena where African Americans faced crippling disparities. After the Supreme Court ruled in Brown v Board of Education that segregated schools were unconstitutional, cities, segregated from years of housing discrimination, were struggling to integrate their schools.

By the mid-70s Portland had become increasingly segregated and the school district was planning to close schools in Black neighborhoods and bus children across the city into classrooms that were unprepared to welcome them.

Jefferson High School and King Elementary were slated for closure. However, community activists fiercely opposed the plan and mounted a campaign against it led by the Black United Front under the Rev. John Jackson and Ron Herndon. They won that fight but there were plenty more ahead. Read more about Portland's African American community

During its first six months, The Skanner reported on the city's equal employment opportunity ordinance, the minority contractors’ lawsuit against the federal and state government and on their efforts to win a fair share of contracts on TriMet's new transit mall project.

It reported that a police officer had beaten Tony Allen, 16, for backtalking and that the Office of Civil Rights had found school discipline discriminated against minority children.

For the last 45 years The Skanner has amplified the voices of Black and minority communities in Portland and the Northwest.

The paper employed a succession of first-class investigative journalists who shone a bright light on racism, discrimination and injustice wherever it was to be found--and that was just about everywhere. No matter whether the story was about justice or health, business or housing, The Skanner brought an equity lens to its reporting.

A crew of talented designers, layout specialists, photographers and web editors created visual stories for the paper and later for the website. Incidentally The Skanner went digital early, launching its first website in 1997.

The Publisher's editorials pulled no punches, once advising readers not to call police in a  crisis because it would be too dangerous.

On the business side the publication benefited from strong sales, by Ted Banks and Jerry Foster. 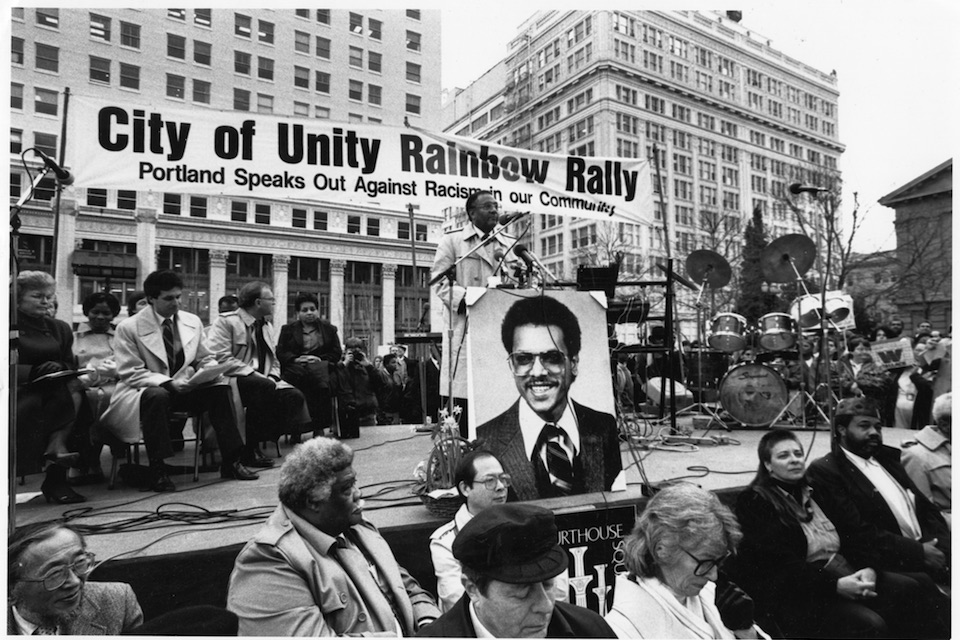 In 1987 it would also make the news, with its successful community-powered campaign to rename Union Avenue Martin Luther King Jr. Boulevard.

Over the decades African Americans have made gains in every arena. Could we have forecast a President Barack Obama in 1975? Could we have imagined BET or Queen Bey? And yet we know the struggle is far from over. The disparities persist and hate keeps pushing love to the limits. 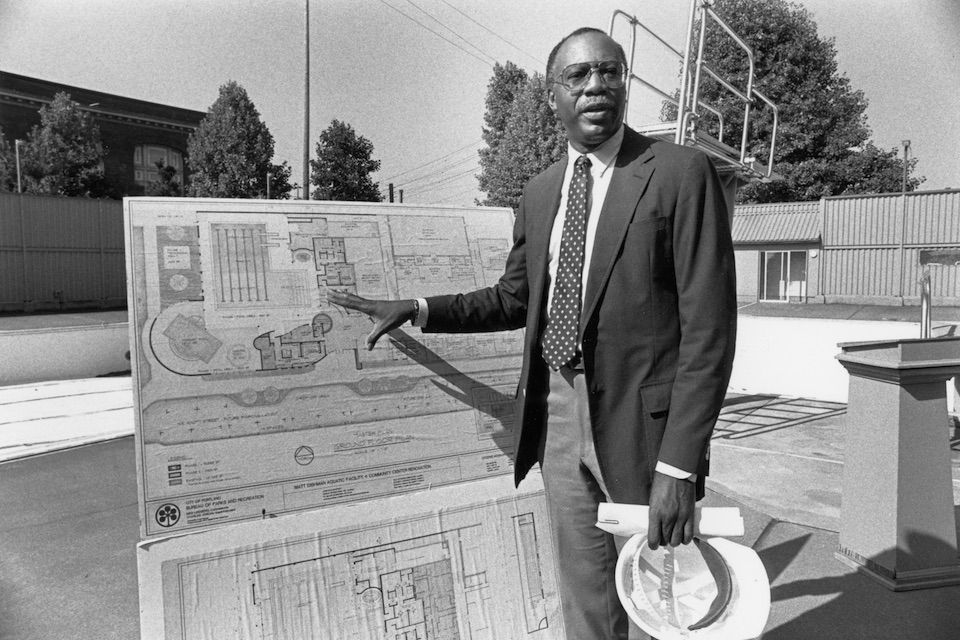 Charles Jordan, the director of Portland Parks and Recreation unveils his plans for the new pool at the Matt Dishman centre. 1991 Julie Keefe.

The Skanner Gives Back

The Skanner has been at the forefront of progress. Its readers learned about community campaigns for justice and equity as they happened. Its pages mapped gentrification and explained the school to prison pipeline before other news media knew they existed.

But Bernie and Bobbie always wanted to do more.

That's why in 1986 they organized the Skanner Foundation Scholarships Breakfast to help promising students finance their education. With the help of generous corporate and community partners, dozens of young people are being encouraged to pursue their dreams of education. Since 1996 over $450,000 in scholarships has been awarded to 350 students, not including, donations to Rotary Club of Albina’s scholarships.

Past scholarship winners have gone on to become professionals in many fields including dentistry, medicine, law, pharmacy and the arts.

The Skanner also founded the North Portland Multimedia Training Center. Administrator Naomi Pierce and videographer Vo Minh supervised trainees as they learned how to make and share videos. The videos produced for the Vanport Project reclaimed some of Portland's hidden history and allowed community members to tell their own stories. 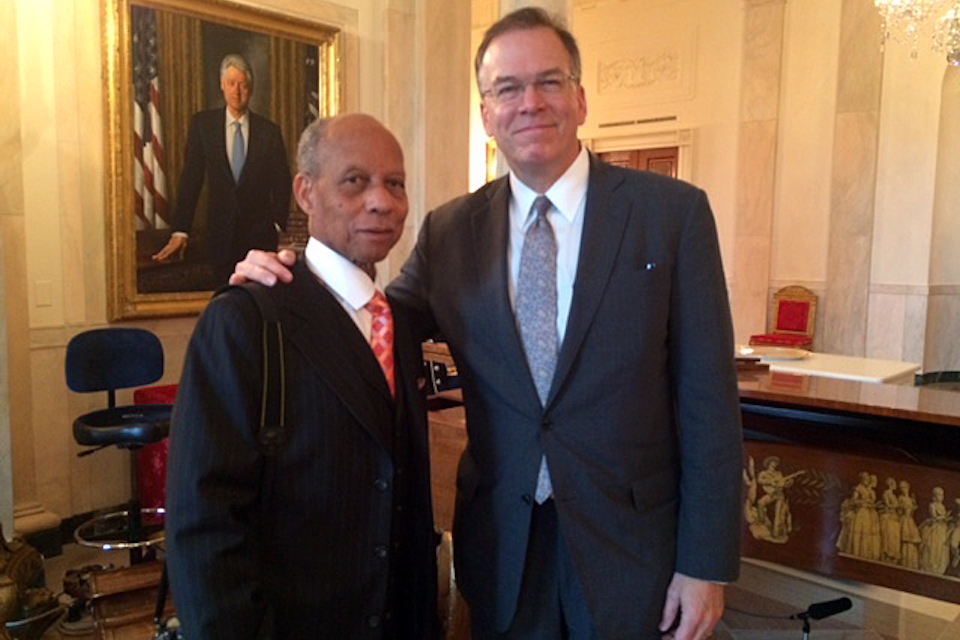 Bernie Foster with Commissioner Nick Fish at the White House attending a ceremony to award the Medal of Honour to WW1 soldier Sgt. Henry Johnson.

Many former employees of The Skanner have gone on to build stellar careers.

Tonya Parker worked for the City of Portland and served as director of the Bureau of Housing and Community Development. Michael Axley earned a medical degree and is now a doctor who specializes in anesthesia at Oregon Health Science University. Brian Stimson studied law and is an attorney. Lisa Loving is an author, broadcaster, media educator and an expert in citizen journalism. Helen Silvis is communications manager for the Church of Scotland in Edinburgh and continues to work with The Skanner. David Kidd publishes rare books.

Photographer Julie Keefe, who has contributed to the paper for many years was named Portland's first creative laureate in 2012 and continues to break new ground in her art.

Seattle photographer Susan Fried currently has a work on display in the Beyond Bollywood exhibition at the Museum of History and Industry.

Bernie and Bobbie's philosophy is simple. Do something every day to make the world a better place. 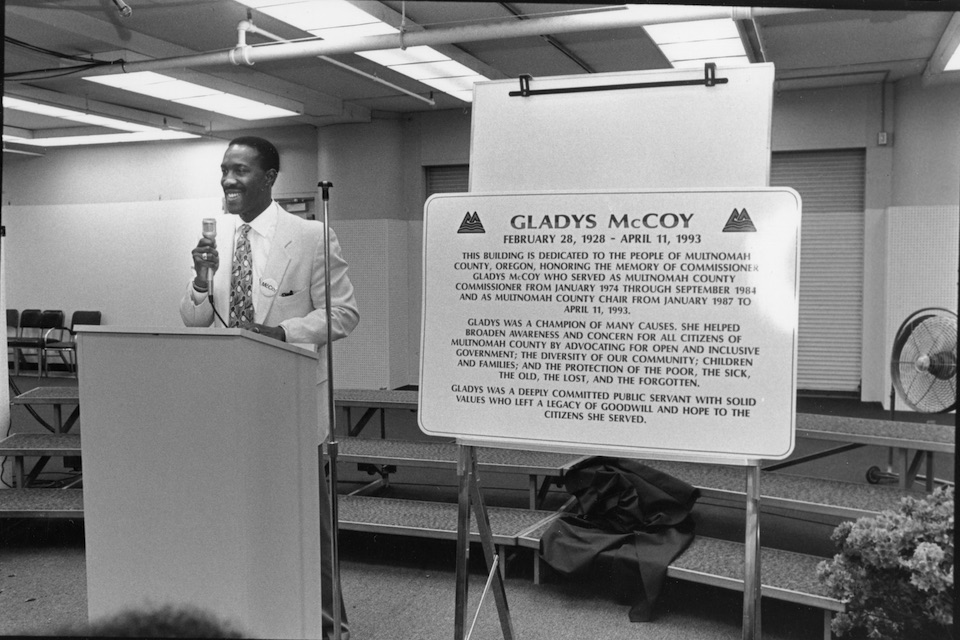 Paul McCoy unveils plaque dedicated to his mother at the opening of the Gladys McCoy building in 1993. Photo by Julie Keefe

The Skanner is changing

The media landscape has changed over the last four decades and so must The Skanner. Newspapers have lost billions in advertising revenue to the new media giants, Google and Facebook. Thousands of journalists have been laid off and hundreds of papers have closed. Can independent high-quality journalism survive? Yet to look on the bright side, anyone with a phone in his or her pocket can publish a story on social media.

No newspapers have been immune to the changes. Even the Newseum in Washington DC is slated to close.

The Skanner will not close, but we will adapt.

The Skanner Scholarship breakfast, which helps young people realize their dream of education, also continues. And the hope is that sponsors and the community will remain staunch supporters of this effort.

Bobbie and Bernie are not planning on retiring. The Skanner Foundation and the Martin Luther King Jr Scholarship Breakfast will carry on.

"People come up to us. They say you have to keep doing this, you can't stop. So Bernie and I look at each other and say, "Well, it looks like we are not going to be retiring yet because it means something to people in the community."