By The Skanner News
Published: 13 February 2008 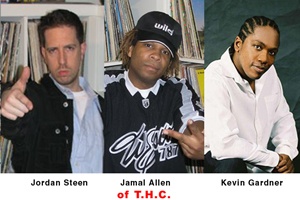 They've been featured on a hit show on MTV, they have one of the 50 most requested songs on KUBE 93 in 2007, and have produced tracks for West Coast rap legends like E-40 & Mac Mall. If you haven't heard of The Hit Collective, or T.H.C., as they prefer to be called, you've been given notice.
Born and raised in Seattle, the trio is a music production team that writes, produces, and performs their own material, as well as creating and producing material for other artists. It is difficult to pigeonhole the crew into any one genre of music, because their production credits include pop, rock, hip hop, and R&B acts. THC has helped produce such acts as Ashley Tisdale, Brad, Lil Scrappy, and Jessy Malay.
Recently, THC has been producing tracks for Warner Brothers artists like Mike Jones and Tiffany Affair. The new, full length album release "THC HITS" will include all of the remixes that the crew produced in 2007, as well as tracks from a couple of unsigned artists they have been working with.
The lead single "Gonna Get Luv" features one of these artists, who calls himself Jem&I. Director Michael Schultz, whose credits include "The Show" and Jennifer Lopez's television show "South Beach," produced and directed the video. Schultz has also committed to directing video for the next single.
THC has been working together in the national club scene since as early as 2001. They caught their biggest break in late 2003, when they landed a weekly residency on MTV Canada's hit show "Select." By the 3rd season of the show the guys had their own segment, and the show was slated to get behind the group's debut release of their first artist "The High Children." Unfortunately, weeks before the release, "Select" was canceled, and the project was shelved.
Fortunately by this time, THC members Emcee Jamal and LSDJ had begun to produce exclusive radio remixes for radio stations KUBE 93 & C89. Soon after, the two hooked up with Platinum Credited Producer, Kevin Gardner. After a couple of chart topping remixes which included Mya's "My love is like...Wo" and Kanye West's "Gigolo", it wasn't long before the Major Labels started noticing.  Soon after, THC began producing remixes for Warner Brothers & Def Jam records.
With all of the momentum, it is likely that the Northwest's best kept secret will not be a secret for very much longer.
Now that they have Seattle locked down, THC is currently booking a nationwide tour, including all the major markets including New York, Miami, and Los Angeles. The full length CD "THC HITS" will be released on April 20, but may be available on CD Baby and iTunes before that.
You can check out the THC's MTV clips, debut video, and music online at: thehitcollective.com AND Myspace.com/thchits.