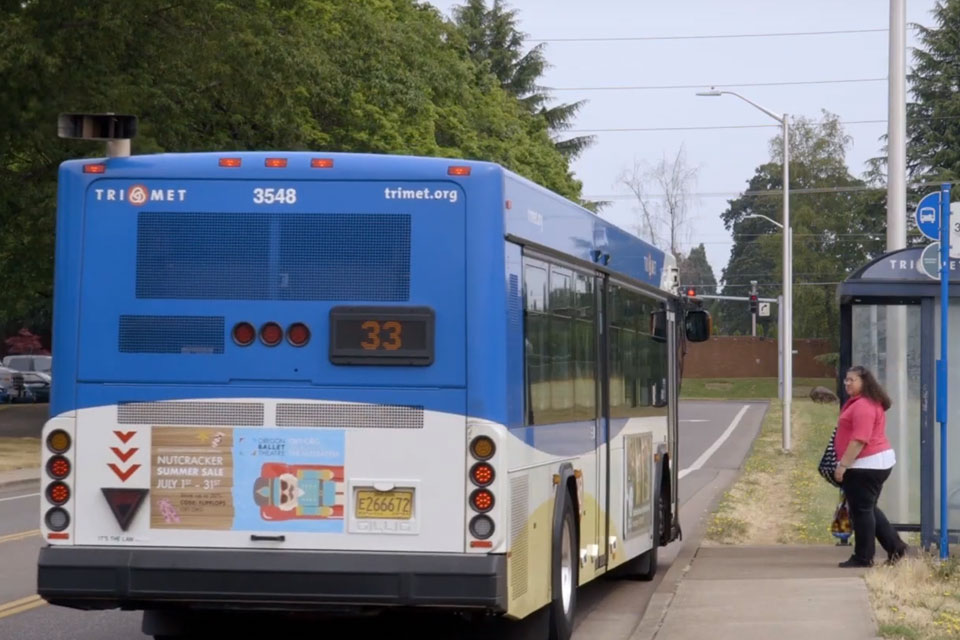 At 28 years old, Coty H. is starting over. He admits he’s made mistakes and is no stranger to the criminal justice system. He doesn’t like to talk about where he came from. He says it “wasn’t the coolest place in the world,” but during a visit to the Clackamas Community Corrections Transition Center, he did open up about where he’s going. He credits a program offered at the center, for helping to set his life in a new direction and TriMet, for helping him on the journey.

“When I got released from jail, I came here, to the Transition Center,” Coty said. “I was like, ‘I’m not leaving until I get into a program. I need something that’s stable and hardcore.’ They hooked me up with the Foundations Program. It wasn’t easy, but it’s something I definitely needed.”

Located just steps from the Clackamas County Jail, the Transition Center is a one-stop location for people leaving jail or prison and those at risk of returning, to connect with resources, support, and services. Its mission is to help break patterns and change lives.

“I basically learned to change everything about myself as a person and where I came from, and what I learned from my criminal life and making mistakes,” Coty said.

“I fought it, but I didn’t want to be a knucklehead anymore.”

Partnering to improve access to transit and reduced fare

Coty signed up after he got a job at a metal fabrication plant on Swan Island, some 12 miles away from where he lived in Milwaukie. He said he kicked a bad habit of driving without a license and started using TriMet to access almost everything. In addition to work, he took the bus or MAX to visit his children and finish his GED. He hoped that one day, transit would be part of his plan to go to school to become a welder.

“That way I can actually get a career instead of a job,” he said.

TriMet has partnered with dozens of non-profits, social service agencies, colleges and universities to expand access to the low-income fare program. Fifteen sites, including The Rosewood Initiative in East Portland, Community Action in Washington County and PSU Transportation and Parking Services in Downtown Portland are open to the public. Other locations, like the Transition Center, exclusively serve their clients. Included are service providers for people experiencing homelessness and offices of the Oregon Department of Human Services.

A sense of relief

“A lot of our clients risk riding without fare, getting stopped and receiving a citation,” explained Kimber Gillaspy, an employment and training specialist at the center. “It can be scary because there’s already anxiety around touches with authority and law enforcement.

"To be able to avoid that and know you’re riding with your fare… It’s a huge relief.”

The low-income fare program allows participants access to unlimited rides on TriMet for $28 per month, a 72% discount off the cost of Adult fare. It’s open to Oregon residents, between 18 and 64 years old, who live on up to double the federal poverty level. That’s currently about $25,000 for an individual and up to $50,000 for a family of four.

“It’s been a lovely match for individuals whose primary mode of transportation is TriMet because they can’t get a driver license because of fines, fees or sentencing guidelines,” Kimber continued. “When you’re already facing the hardship of unemployment, no housing or homelessness, it’s significant to say hey, if you meet these qualifiers, we can assist you by getting you the low-income (Honored Citizen) fare card.”

TriMet expanded their Honored Citizen reduced fare to allow qualification based on income, after the state of Oregon adopted Keep Oregon Moving. The 2017 transportation package provided the first-ever, ongoing, stable source of funding for public transportation in state history. More than 26,000 people enrolled in the program in the first 18 months that it was available.

“It makes it so I can buy other things, like food, and child support is an issue as well,” Coty offered. “What’s the regular fare, $100 a month?

"I have to pay rent and all of this other stuff and so, taking $72 away from that, it helps quite a bit.”