Reactions to the Impeachment of President Trump 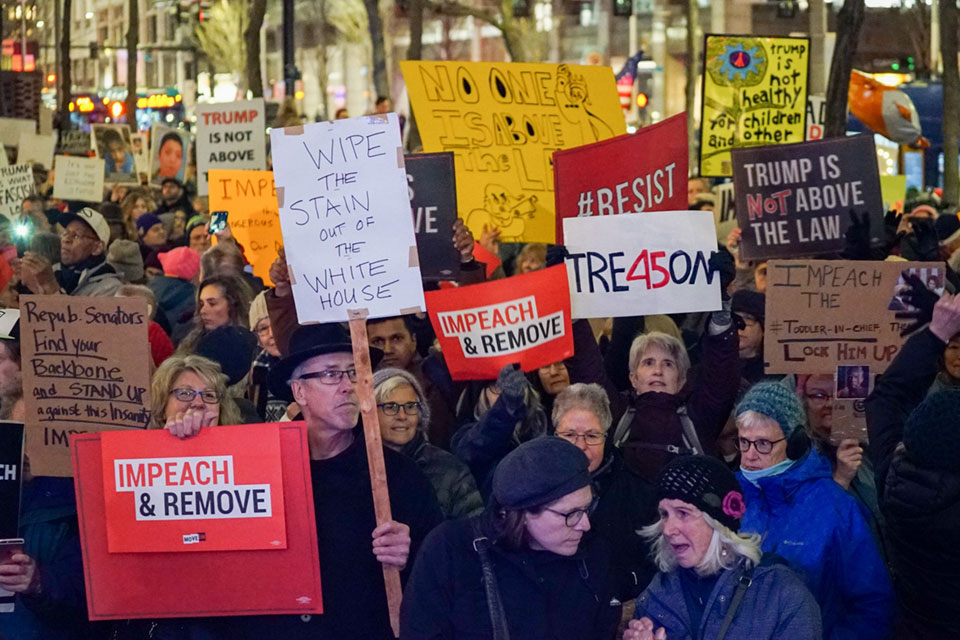 Trump Impeached on Charges of Abuse of Power, Obstruction

WASHINGTON (AP) — President Donald Trump was impeached by the U.S. House of Representatives, becoming only the third American chief executive to be formally charged under the Constitution’s ultimate remedy for high crimes and misdemeanors.

The historic vote split along party lines Wednesday night, much the way it has divided the nation, over a charge that the 45th president abused the power of his office by enlisting a foreign government to investigate a political rival ahead of the 2020 election. The House then approved a second charge, that he obstructed Congress in its investigation.

The articles of impeachment, the political equivalent of an indictment, now go to the Senate for trial. If Trump is acquitted by the Republican-led chamber, as expected, he still would have to run for reelection carrying the enduring stain of impeachment on his purposely disruptive presidency.

“The NAACP appreciates the courage and dedication of the U.S. House of Representatives in voting to impeach President Donald Trump on two articles: abuse of power and obstruction of Congress. We recognize that this vote was cast after extensive investigation and reflection. We thank the members who showed the courage of their convictions to stand up for the Constitution and place our rule of law above the interests and actions of a single individual.

No one, not even the president, is above the law.

The evidence shows that President Trump abused the powers of the presidency by sacrificing our security and other vital national interests for his own personal and political benefit. He has betrayed the nation by abusing his office and attempting to enlist a foreign power in corrupting our democratic elections. That he actively sought foreign interference in our elections is an insult to every American who has struggled for the right to cast a free and unfettered vote and to have that vote counted equally. 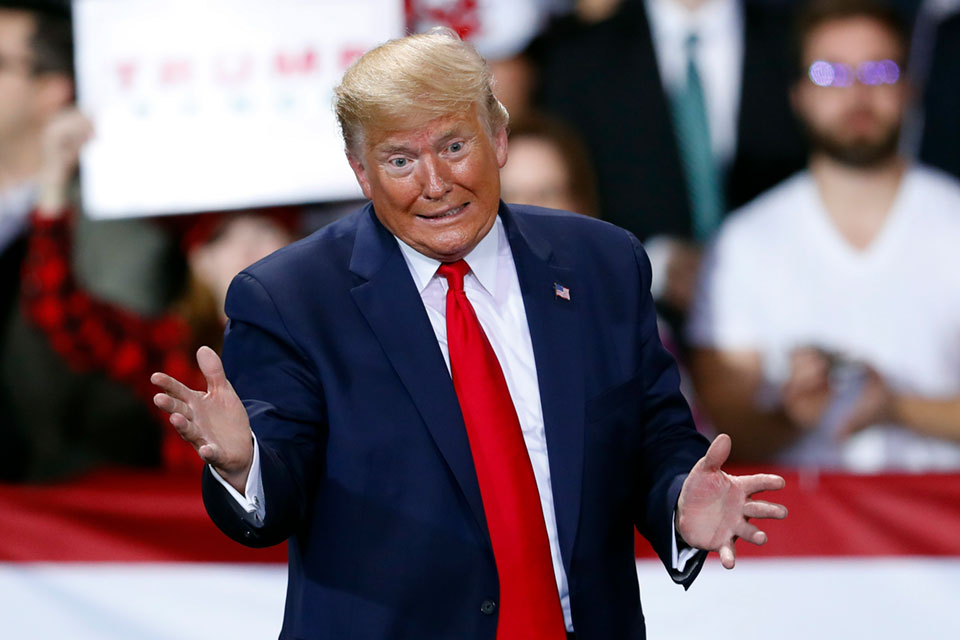 President Donald Trump speaks at a campaign rally in Battle Creek, Mich., Wednesday, Dec. 18, 2019. (AP Photo/Paul Sancya)The evidence shows that President Trump obstructed the investigation by Congress into his activities by showing ‘unprecedented, categorical and discriminate defiance’ of its oversight role required by the Constitution.

The Senate must now discharge its Constitutional obligations to conduct a fair and impartial trial and treat this national crisis with the solemnity and gravity it deserves. The president must be held accountable for his actions.

Today’s vote and the Senate trial will directly affect the integrity and security of the 2020 election. Foreign intervention in the 2016 election – for the benefit of Donald Trump –   is a proven fact.  The evidence unequivocally shows that President Trump personally demanded foreign interference in our 2020 election, again to his own benefit. He will remain a threat to our national security, to our way of life, and to the Constitution if allowed to remain in office.

At this critical juncture, we call for a complete halt to the nomination and confirmation of lifetime judicial appointments to the federal bench. A corrupt president who has shown contempt and disdain for the Constitution should not make irrevocable appointments to the federal judiciary at the same time that his own fitness to serve is being determined by the United States Senate.

The Membership and our Board of Directors are fully committed to the principle that no man is above the law, we are a representative democracy, not a monarchy.”

WASHINGTON, D.C. –Sen. Ron Wyden, D-Ore., issued the following statement after the U.S. House of Representatives voted to impeach Donald Trump for abuse of power and obstruction of Congress.

The articles of impeachment now go to the U.S. Senate, which will hear arguments and vote on whether or not Trump should be removed from office.

“A senator has no weightier responsibility than to judge a president impeached for high crimes and misdemeanors. As a juror in impeachment proceedings, I intend to look at all of the evidence and vote for a just outcome, not a political one,” Wyden said.

“A just outcome is only possible if the trial itself is just – that means the Senate must have access to all of the facts. Our chamber must be able to call all necessary witnesses and subpoena all necessary documents to get the fullest possible picture of the events for which Donald Trump has been impeached. In my view, no member can uphold their oath of office without calling for a full airing of the facts at hand.

"I urge all of my colleagues to think carefully about how history would judge a sham process designed by the person standing trial.”

Senator Jeff Merkley Statement on the Impeachment of President Trump

WASHINGTON, DC — Oregon’s Senator Jeff Merkley released the following statement after the U.S. House of Representatives voted to impeach President Trump for abuse of power and obstruction of Congress:

“Our founders created the process of impeachment because they were deeply concerned about two significant dangers: first, foreign influence that might corrupt American democracy; and second, abuse of power by a president tempted to use his powers to become more like a king.

“For these two reasons, the founders placed in the hands of Congress the means to act as a check on a corrupt president: Impeachment in the House, followed by a trial in the Senate.

“For the first time in his privileged life, Donald trump will finally be held accountable for his reckless personal behavior and business practices.

"By impeaching Donald Trump today, we are taking steps toward accountability. The case is strong, clear, and convincing.”

WASHINGTON, DC [12/18/19] – Today Congresswoman Suzanne Bonamici (D-OR) voted in favor of two articles of impeachment against President Donald J. Trump. One article was for abuse of power and the other for obstruction of Congress.

Bonamici spoke in support of impeachment on the House floor prior to the vote.

“Donald Trump has abused his office, obstructed justice and Congress, jeopardized national security, and betrayed the American people. The witnesses at the House Intelligence and Judiciary committee hearings, as well as the President’s own words, have made these facts clear. He must be held accountable.

“The Founding Fathers included the impeachment process in the Constitution to uphold our values and maintain the checks and balances that are essential to democracy. They knew way back in 1787 that someone in the office of President could abuse the power of the office. And that is what Donald Trump has done – abused the power of his office by inviting a foreign government to interfere in a U.S. election. He did this not to help the United States, but to benefit himself. That’s wrong, and it is an impeachable offense. In our country, no one is above the law. That includes the President of the United States.

“As a separate and equal branch of government, Congress has been working to uncover the President’s wrongdoings — and at every turn the President has brazenly obstructed our inquiry, even defying subpoenas.

“I swore an oath to uphold the Constitution, and I take my obligation very seriously. I did that today by voting for the two articles of impeachment, and I will continue to work with my colleagues to hold this President accountable for his misdeeds and do what is best for Oregonians and the American people.”

Bonamici first came out in support of an impeachment inquiry in May.

“The House has laid out a clear set of facts that should be alarming to anyone who cares about the integrity of our elections or the rule of law. The House presented a compelling case that the president solicited foreign interference in the 2020 election, that he conditioned official actions on this interference, and that he used the power of the office to advance his own interest instead of the public interest. By their vote today, they have concluded that this abuse of power and the president’s obstruction of the investigation are significant enough to trigger a Senate trial on whether President Trump should remain in office.

“Now, the process moves to the Senate, and this is a moment in which every Senator must put country above party.

"The guiding principle must be complete impartiality in service of the Constitution we swore to uphold. Every Senator should search their own heart, and ask themselves what they would do if the president were of the opposite party. We owe the nation facts, fairness, and integrity—not a cover-up.

“I am profoundly disturbed that the Majority Leader has already said that rather than conduct a fair trial, he is working alongside the White House to enact a party-wide cover-up. It is stunning that he is refusing to call witnesses because they would have evidence about the president’s misconduct.

“At the start of the trial, all Senators will swear an oath to ‘do impartial justice according to the Constitution and laws.’ The oath is not to their party, and not to their president. We are a nation of laws, not a cult of personality. If the Majority Leader blocks the conduct of a fair trial intended by the founders to determine whether the president has abused his power, and whether that abuse merits expulsion from office, then the Majority Leader will have inflicted a wound to our democracy that will have damaging consequences for decades to come. I hope that, over the coming holiday, all Senators will ponder their grave responsibility to rise to the occasion, and to bring our nation the facts, fairness, and integrity America deserves.”

Tonight, the House of Representatives voted to impeach Donald Trump for abuse of power and obstruction of Congress.

This vote happened amid overwhelming and irrefutable evidence Trump pressured a foreign country to interfere in our election on his behalf, and then obstructed a congressional investigation into his actions.

It is only the third time in our nation's history that a president has been impeached.

All of Oregon's Democratic Congressional Delegation voted in favor of impeachment.

We're thankful for their leadership, their dedication to their oaths of office, and their understanding that no one is above the law.

The vote proved that we cannot say the same of any House Republican, including Greg Walden.

The impeachment proceedings now move to the Senate, where Mitch McConnell has already made clear that he has no intention of holding a fair trial.

No matter what happens next, our mission in 2020 is clear: To elect Democrats up and down the ballot, all across Oregon.

“Today will go down in history.

"Congress has defended American democracy against a president who knows no bounds.

“President Trump, in his attempt to condition previously authorized military aide to a country in need based on that country’s willingness to conduct a sham investigation of his political opponent, abused his presidential authority, threatened national security and undermined our democratic elections. He flouted Congress’ role as a co-equal branch of government, defying legitimate constitutional authority. More than 700 historians and scholars, and now the majority of the U.S. House of Representatives, agree; the gravity of the moment cannot be overstated.

“The members of Congress who voted for impeachment today have shown tremendous courage. They were willing to ignore presidential bullying and name-calling to take the necessary action to protect our Constitution, and we are grateful for their patriotism.

“Tomorrow, educators around this country will enter their classrooms to teach their students about the integrity of democratic elections and the sanctity of the rule of law. Now, they can do so knowing the House of Representatives did the job our founders envisioned, and that no one in America—not even the president—is above the law.”