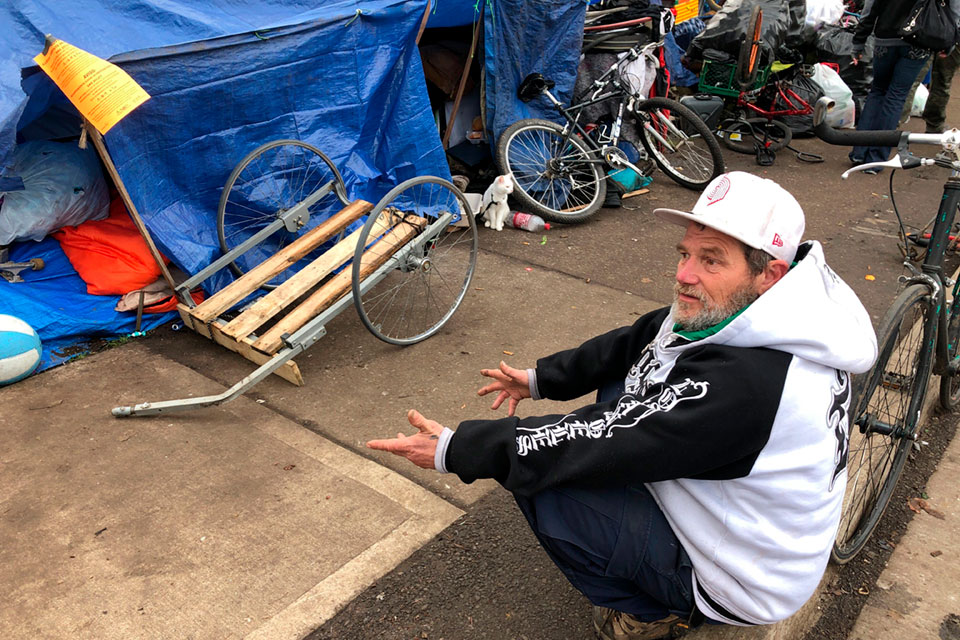 SALEM, Ore. (AP) — James Wilbur sat next to a blue tarp covering his tent and supplies Tuesday at a sidewalk homeless camp in Oregon's capital city, wondering where he would sleep the next few days and weeks.

Affixed to the tarp was a notice declaring the campsite illegal and warning that anyone remaining there after 9 a.m. Wednesday could be subject to criminal prosecution.

"Being homeless is becoming illegal," the 52-year-old, bearded and wearing a Portland Trailblazers cap, said.

Several police officers walked through the camp where dozens of people have been staying for several weeks, a few blocks from Salem's central business district.

Several months ago, the city of Salem ejected homeless people from a park that runs along the edge of the Willamette River. That had the effect of pushing the homeless issue more into public view.

Wilbur had been one of those staying at Wallace Marine Park, and said he lost thousands of dollars in camping supplies because city officials gave no warning they were moving in. City spokespeople said police did give people 24 hours notice.

The Los Angeles native said he has been living in Oregon for almost three decades and cannot work because of a bad back. He has been homeless off and on for 20 years.

"It's tough. When I sleep on the ground, I need to lie on lots of blankets because of my back," he said.

Advocates estimate about 1,800 homeless people live in Salem, the Statesman Journal newspaper reported. Dozens have been living in the tents and tarps next to a block-long stretch of road near a social services provider. Some have said they plan to protest about their predicament at the Oregon State Capitol.

Many other cities in America have been grappling with what to do with a growing number of homeless people. The U.S. Supreme Court on Monday left in place a ruling by the 9th U.S. Circuit Court of Appeals that Boise, Idaho, could not make it a crime for homeless people to sleep on the streets when no alternative shelter is available.

Howard Belodoff, the Idaho Legal Aid attorney who represented the Boise homeless residents in the case, said the decision means a lot for homeless individuals throughout the West. 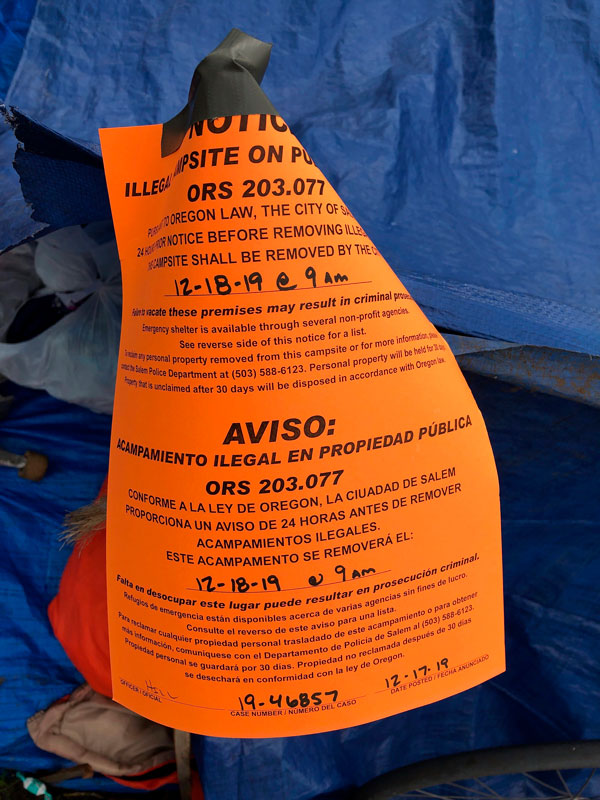 This notice was left on a homeless person's tent on the street in Salem, Ore., on Tuesday, Dec. 17, 2019, and left for dozens of other homeless people who are camped out on a street that were notified that they must leave by Wednesday morning. Salem is grappling with the issue of what to do about the hundreds of homeless people in Oregon's capital city. (AP Photo/Andrew Selsky)Officials in Salem say they're not violating the appeals court ruling because the city's camping regulation does not impose a criminal penalty, does not criminalize or affect anyone's status and allows unsheltered individuals to protect themselves against the elements, just not through a campsite.

However, the orange notices that were affixed to the tents on Tuesday say that "failure to vacate these premises may result in criminal prosecution."

Advised that the notice appears to contradict the city's position, Salemspokeswoman Kathy Ursprung said they were repurposed from park use. But people who refuse to leave could be charged with criminal trespass, she added.

"Our primary goal is voluntary compliance and getting people the help they need," Ursprung said.

A city ordinance says public sidewalks weren't intended to be campsites and that people who camp or leave personal property unattended on sidewalks deters others from patronizing shops, restaurants, and businesses.

The Salem City Council agreed this month to spend up to $213,000 to open 140 warming shelter beds at two churches from Jan. 1 to March 31, the Statesman Journal reported. Salem homeless shelters also have some 300 beds, and they are often full.

"I don't know what I'm going to do until Jan. 1 when it gets cold out here," Wilbur said. "I'm going to leave my stuff on a friends porch, but where I'll stay, I don't know."