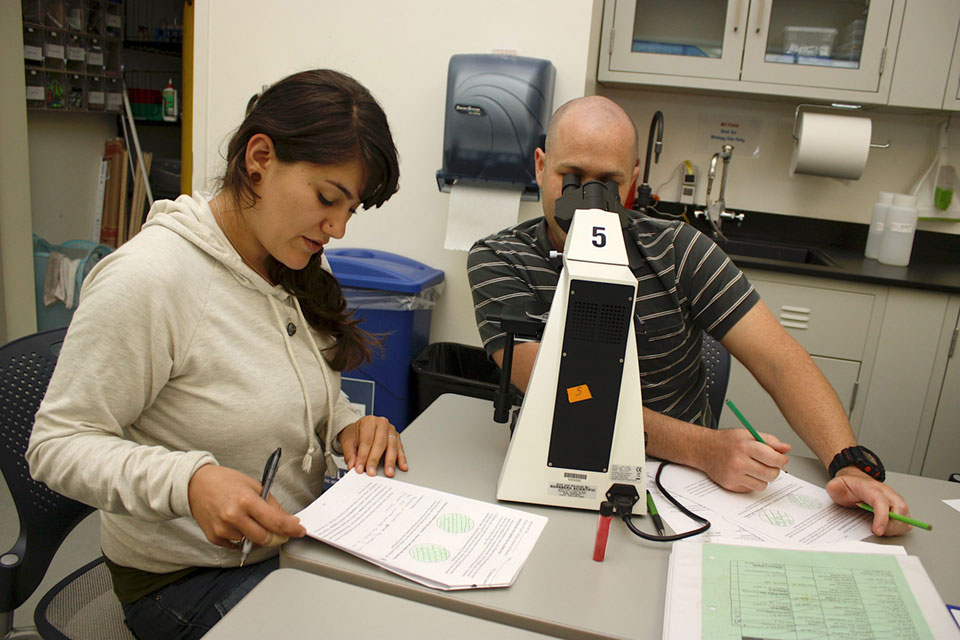 Portland Community College has secured a $1 million grant from the National Science Foundation to support 108 under-served students interested in careers in the science, technology, engineering and mathematics (STEM) fields.

The College to Careers in Math and Science Project will launch with its first cohort of students at the beginning of next year, and will provide scholarships for participating students’ remaining time at PCC, as well as for their first year at Portland State University.

Dr. Jerome Du Boulay, a chemistry instructor who is helping to organize and implement the program, said the grant was written to address a troubling statistic: Only 37% of African American students passed a critical math course in the 2017-2018 school year, according to data from PCC's Institutional Effectiveness Office.

Du Boulay said two courses in particular--Math 95 and Math 111--are foundational in STEM studies, and that the latter had an overall passing rate of only 63%.

The new program will support participants in these classes by using a “flipped classroom” structure, where students view lectures online from home, then conduct experiments or attempt to solve math problems in class with the help of instructors and classmates. As the program progresses, students who have successfully passed the classes will then be available to mentor the next group of participants.

“The idea is they can have somebody that looks like them, sounds like them, and is just a little bit further along than they are,” Du Boulay said.

Laura Horani, Interim Division Dean of Math, Science and Career and Technical Education at PCC's Southeast Campus, told The Skanner that inclusion and sense of community are a large piece of College to Careers. To that end, the project also focuses on mentorship and support.

“Research shows if you make connections as a student, you will not only be retained, you will succeed,” Horani said.

“There’s a lot that contributes to lack of retention of under-represented students,” Zhang told The Skanner. “Overall STEM field retention is not high for anybody, but it is much worse for underrepresented students. They suffer from impostor syndrome, not feeling like they fit in because there are so few underrepresented minorities and low-income students who are in the field. There’s also the fact that when things get tough, if they don’t have people around them to provide them with a little bit more encouragement as well as just specific tools to succeed in those classes, then it’s easier for them to just feel like this is not for them, versus people who have more social support and have had the privilege of knowing more people who have actually progressed through the STEM fields--they know it’s tough, but it’s tough for everybody, so they’re more likely to just keep going.”

“There aren’t many faculty that are minorities in the STEM sciences, so looking for people to advocate for them, it’s few and far between,” he said. “In my own experience I’ve had students who have seen me there and say, ‘Oh, I can do that.’”

Du Boulay acknowledged another barrier: “You have a lot of students whose parents never went to college, so they don’t have a really good skill set about just the doing of college in general.”

He said College to Careers, with the help of MESA, will address this disparity by providing classes through the business department to better prepare students for successful college careers and to teach them what to expect in the workplace.

While applications are still being accepted from potential College to Careers scholars, other students at PCC describe unique opportunities for supported STEM study on campus.

Returning student Wolfgang did not initially graduate high school, but after enrolling at PCC to study atmospheric physics and volcanology, the self-described “older student” was shocked to be able to participate in the STEM Community-College Opportunity for Research Experience (SCORE) Program, funded by the Oregon NASA Space Grant Consortium.

“To exhibit what a wonderful opportunity this was for me, I really didn’t have a lot of opportunity for schooling past middle school,” Wolfgang told The Skanner, “so to catch up in school, and to have this opportunity for research, is totally astounding. You get to learn everything with everybody.”

Wolfgang is on a team of nearly a dozen people to complete a year-long, multidisciplinary project.

“What’s great is we all have our pieces,” Wolfgang said.

“I get to be on the team with physics, and the aerospace travel concepts, but we’re also interested in each other’s backgrounds. You get to learn everything, and it’s all so interesting, and we’re all already asking questions of, ‘What are you doing over there?’ We’re all very dedicated to the interdisciplinary aspect of it.”

The organizers of College to Careers say they hope to bring that same sense of teamwork to PCC.

The MESA Community College program model has been used in Washington and California, but is the first of its kind in Oregon--and PCC Southeast is working to become the regional center for the organization, Zhang said.

Horani explained that PCC’s Southeast Campus is an ideal location, as it serves a population of students of color who have been continually pushed further out of Portland due to gentrification. She said the college’s under-served population also includes refugees from Afghanistan, Syria and Iraq.

“At PCC, we’re really trying to have equitable student success,” Horani said. “It’s part of our mission right now, and I know that’s why (McQuarters) went after this grant. He saw a need where students were not succeeding equitably, and he saw those areas needed to be improved.”

Scholarships are available to first-year southeast Asian, Middle Eastern, African American, Black, Latino and Native American students who are interested in pursuing careers in the STEM fields. The deadline to apply is Dec. 2.