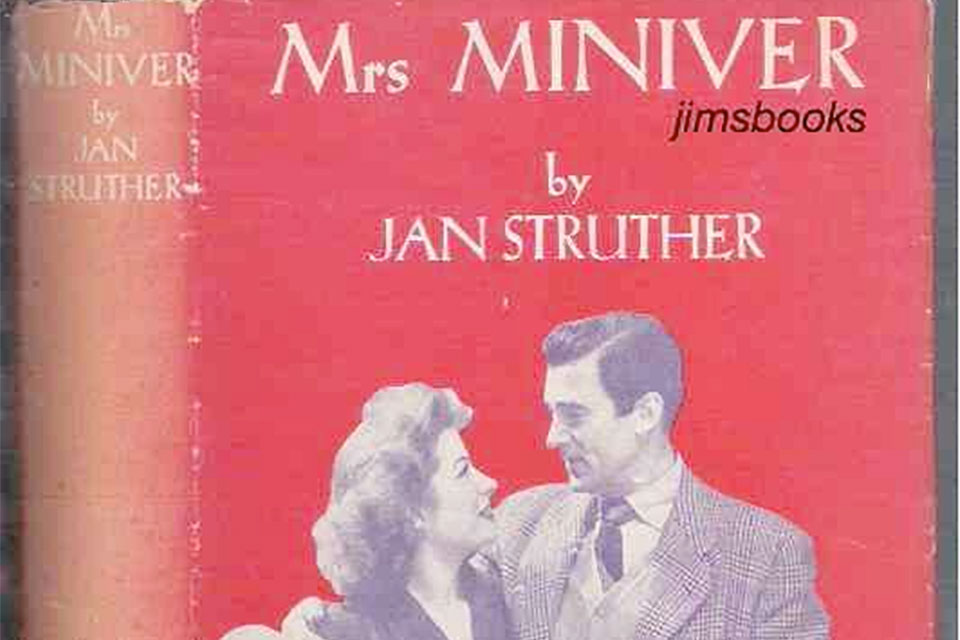 VANCOUVER, Wash. (AP) — Elaine Wilk was a reader until the end, filling her home over the years with books stacked high in her personal library.

Purported American psychics Edward Cayce and John Edward caught her attention for a time. She devoured anything by Sherman Alexie, a Native American author who grew up on the Spokane Indian Reservation. And as she neared the end of her life in 2011, it was art books, inspiration for the hours she spent with a palette of watercolors and a brush in her hand.

But perhaps one nondescript red book should have caught Wilk's attention sooner: a copy of "Mrs. Miniver" by Jan Struther, checked out and overdue from the now nonexistent Vancouver High School library by, oh, more than 70 years.

"I had to laugh about it," said Kasia Wilk, Elaine Wilk's daughter, who came across the novel while downsizing her mother's expansive collection.

Kasia Wilk, who lives in Federal Way, did the only thing she could think to do. She returned the book, shipping it to Fort Vancouver High School, which traces its roots to the old Vancouver High.

Receiving such an overdue book is a new experience for Kate Burton, who has been the librarian at the school for 16 years. Sometimes a book comes in five years or even 10 years overdue, but even that's unusual.

"I've never had anything mailed to me," Burton told The Columbian.

It's hard to say for sure exactly how overdue the copy is. For some reason, the librarian at the time never stamped the book with a due date. But the novel was published in 1940, and Elaine, whose full maiden name was Francis Elaine Bailey, graduated from Vancouver High School in 1943.

"It has to have been out at least 76 years," Burton said.

And, to the curious, the book opens a window into history with the kind of magic only an aging library book can. Upon reading the letter, Burton immediately went to the archives, pulling a 1943 copy of the Alki, the high school yearbook.

She soon found Francis Elaine Bailey, followed by a list of accomplishments and commitments. She was a member of a president's advisory group, a locker monitor and sang in the choir.

And the Alki says as much about the times as it does about each student. Printed at the top of each page is a silver eagle, emblazoned with the word "victory," a nod to the war raging overseas.

"It was a rough time for the world," Kasia Wilk wrote in her letter to Burton.

World War II was leaving its indelible mark on Vancouver and its school district, as detailed in the 1975 book "A History of the Vancouver Public Schools." The city was little more than "an overgrown village," according to the archive.

"Then came the war, and Henry Kaiser decided to build Liberty ships at Vancouver," the book continues. The town and schools "doubled, tripled and then simply exploded."

Paul Gaiser, the district's superintendent from 1934 until 1952, wrote that "the total Vancouver war experience was unusual."

"Among the people crowding rapidly into this old and rather contented conservative community was a veritable flood of children which swamped the school system," Gaiser wrote. "During these years, when there was a war to be won, there were heroes not only on the field of battle but also on the home front."

The war touched Elaine Bailey's life, as well. She was working at the Kiggins Theatre in the months leading up to her graduation when her future husband, Arthur Wilk, walked in to catch a picture. He was an Army man, five years her senior, and stationed at the Vancouver Barracks before being shipped off to Europe.

The way the story goes, Kasia Wilk said, he nudged his friend, pointed to Elaine Bailey and said, "I'm going to marry that woman."

"They were married for 64 years before he passed," Kasia Wilk said.

Arthur Wilk attended her graduation, then whisked his new bride off to Buffalo, New York, while he deployed to France.

"Apparently she hated it there," Kasia Wilk said.

So when Arthur Wilk returned from the war, they packed up their belongings and drove across the country to Bremerton, where Elaine Wilk's older sister lived. He worked as a baker, and the pair eventually opened and operated for 38 years the popular Arthur's Bakery in Bellevue.

When Arthur's Bakery closed in 1994, The Seattle Times reported that "tears have come to some eyes. One man wore a black armband, and a woman drove from Eastern Washington to pay her last respects."

Arthur Wilk died in 2007. Elaine Wilk followed four years later. Her obituary, published in The Seattle Times, carried a few of the woman's own words.

"I have had a wonderful life," she wrote. "It's been a ball. I didn't miss anything."

Was "Mrs. Miniver" a stowaway throughout that full, wonderful life? Was there anything it missed? Was it watching out from a shelf in Buffalo while Elaine Wilk awaited her husband's return, perhaps, making its way back to the Northwest in the trunk of the car? Did it oversee Mr. Wilk baking in the family kitchen, or Mrs. Wilk as she painted one of her watercolor portraits?

Kasia Wilk doesn't know. All she knew, thumbing through the small red book, is that it was time to send it home.

And for that, 76 years later, Burton is grateful.

"This woman felt like it was important to return it to the place where it belonged," Burton said.