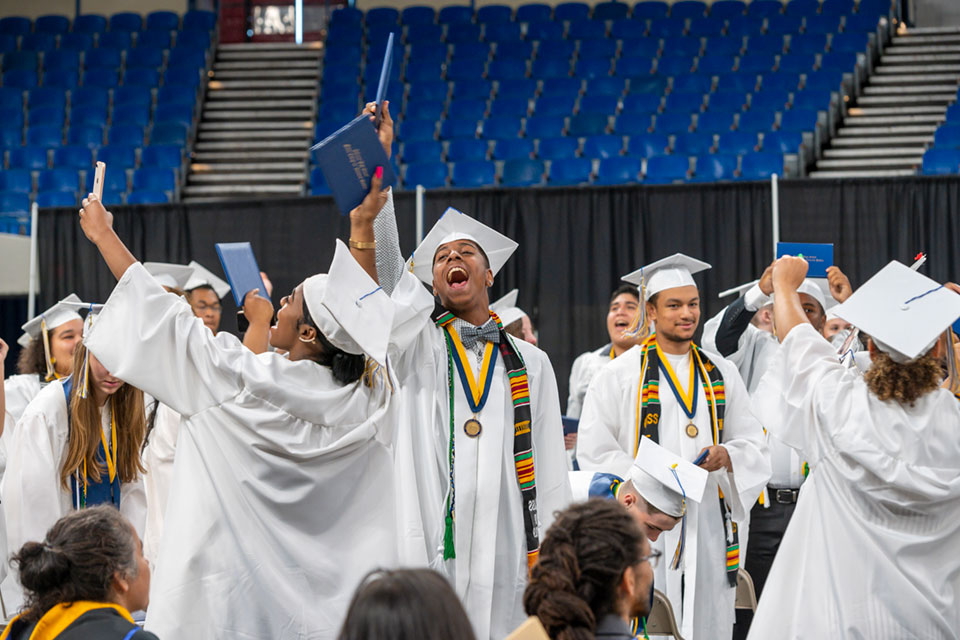 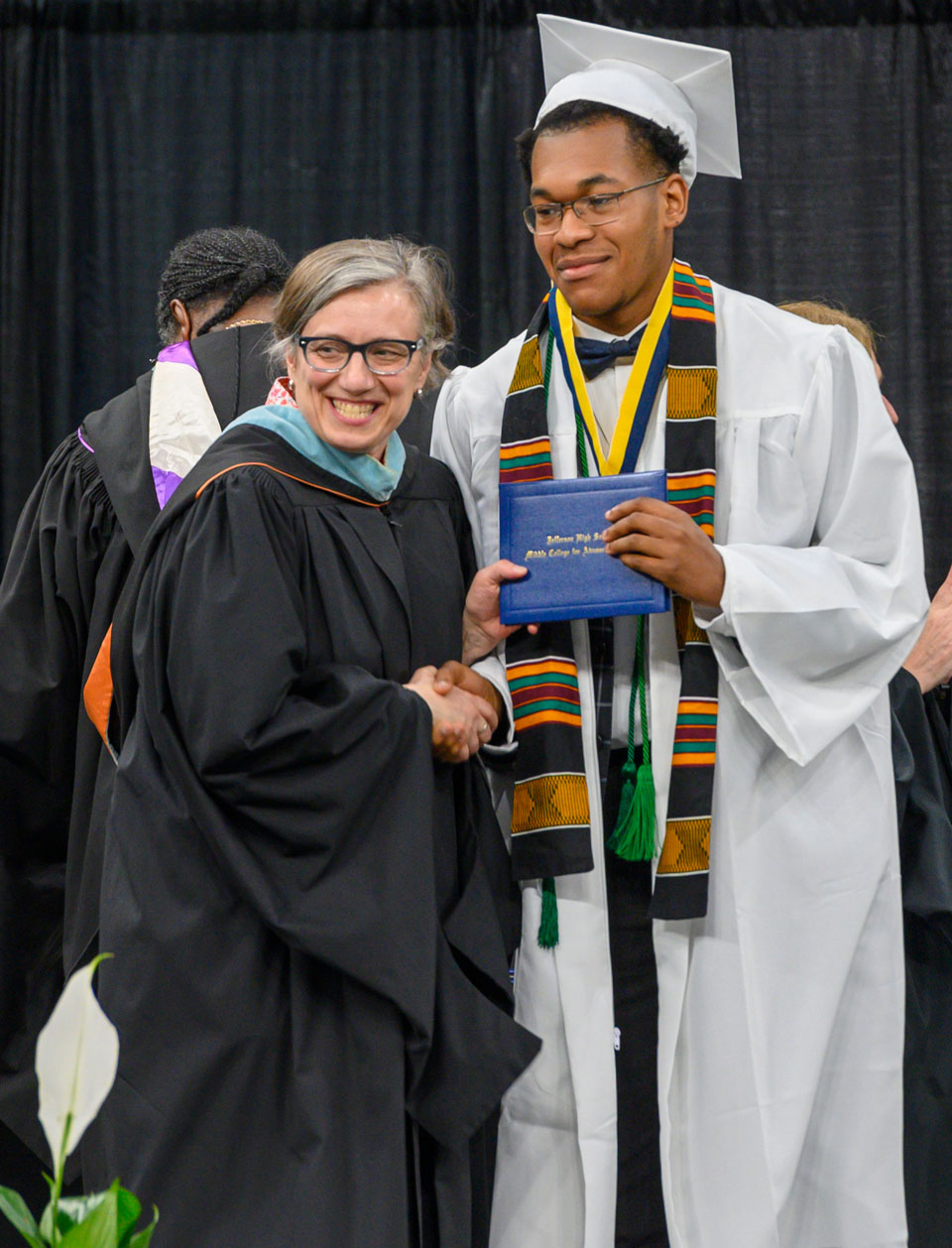 Jefferson High principal Margaret Calvert poses for a photo with a graduate. (photo courtesy PPS)At a time when lagging statewide high school graduation rates are a cause for concern, Jefferson High School is one of few Portland-area high schools to be on par with nationwide averages. Administrators say that has a lot to do with the school’s focus on freshman year success.

The North Portland high school has spent the past eight years re-inventing itself as Jefferson High School Middle College for Advanced Studies, offering students the option to take courses at Portland Community College's Cascade campus across the street. A magnet school, Jefferson is open to students who are also eligible to attend Grant, Madison or Roosevelt high schools. Jefferson is also the only high school in Portland where the majority of students--33%--are Black.

Students who finish ninth grade with one-quarter of their graduation credits completed are far more likely to finish high school, and Jefferson can boast that 95% of its freshmen are in this group.

“We have a core team of teachers called our Freshman Academy Team that focus on freshmen,” principal Margaret Calvert told The Skanner. “Freshmen move as a group, then this group of teachers—language arts, social studies, and a science teacher—work in teams to get to know students. Then they plan the curriculum together, make phone calls, and they do a lot of team-building and welcoming of students to high school.”

The team has one period a week during school hours to collaborate with each other and to meet with students and their families or do outreach.

“As we have coordinated these efforts over time, we’ve gained momentum with getting to know freshmen,” Calvert said.

“And really the trick is getting to know freshmen as quickly as possible.”

Calvert points out that the first six weeks of a student’s freshman year determine how successful students will ultimately be not only that year, but for their entire high school careers. To that end, Jefferson offers a three-week Leap into 9th Grade program over the summer to help incoming students transition from middle to high school.

“It gives students a sort of preview,” Calvert said. “We go through the growth mindset, we do some practice around math and some group work together and teambuilding, so that when they come to school in the fall, they’re familiar with the building, they’ve met some people, some of their peers, they’ve kept their mind sharp and engaged a little bit over the summer, so that those first six weeks is a lot more comfortable.”

The program generally hosts about half the incoming freshmen. During the program, students are connected with administrators they’ll encounter during the regular school year, like dean of students Garin Gregory, as well as counselors.

“You’re trying to figure out so much stuff, especially in the first quarter of your freshman year,” Calvert said. “There’s a lot going on, and if we can help demystify those things, and make sure there’s an adult connection where kids can say ‘Hey, I’m not getting this,’ it helps with the transition. Because if students don’t gain academic confidence early, trying to build it after this initial phase where you’re kind of pushed back, it just takes longer because it just feels like the world is speeding up on you. The first six weeks of freshman year are just so important that if you get behind, you can end up fighting the whole year to try to right the ship.”

Thanks to Measure 98 funding, Jefferson has also added two positions to make sure students are on track not only academically, but socially and emotionally as well. Now in her second year at the school, Kiante Holmes serves as student success advocate for ninth and tenth grades.

“I think schools in general, not just PPS, are realizing that we don’t just educate our kids.

"So many of them are going through social-emotional things that are preventing them from learning,” Holmes told The Skanner.

In her position, Holmes is able to perform more outreach with families, which leads to further collaboration with organizations like the Latino Network and the nonprofit Self Enhancement Inc., whose on-campus coordinators provide wraparound services to students and their families. Holmes estimates SEI serves roughly a third of Jefferson’s students. More than half the students at Jefferson are on the free or reduced lunch program.

This ties into one particular area of Holmes’ focus: improving school attendance, one area where Jefferson’s numbers have lagged in the past year. According to Department of Education data, only 60% of the school’s students have attended more than 90% of their enrolled school days.

“Research has shown that if a student is 90% or more attending school, they have a greater chance of graduating,” Holmes told The Skanner. “But one of the biggest barriers we see is homelessness. A lot for our kids are facing homelessness, and sometimes they’re not living with their biological family. Because of gentrification, a lot of them were forced out into the Gresham area. A lot of them are taking multiple buses, after waking up hours before school starts.”

Holmes said she collaborates with outside agencies and uses Measure 98 funding to normalize her students’ high school experience.

“We try to support our students when they come into our building,” Holmes said.

“Unfortunately, we cannot pay for housing, but some of those tangible things that make it hard to go to school, I can support. Every student gets a bus pass, and under Title X, if they lose the bus pass, they don’t have to pay to replace it. I can provide lunch if they’re on my caseload. We do a second breakfast, because nutrition is huge. We provide as many opportunities as possible for them to have snacks during the day. I can get them clothing, shoes.”

Calvert explained that consistent contact with adults is built into class structure as well: Language Arts classes are double-blocked four days a week so that students spend a lot of time with English teachers and get sufficient practice in critical thinking.

“Part of the benefit we have as a school is our overall student population is between 650 and 700 students,” Calvert said. “The expectation is that there are adults in the building that know the students and what their strengths are, and that we’re building from their strengths.”

Holmes assereted administrators are trying to look beyond the goal of high school graduation.

“Being there, it's not just taking academic classes--it’s taking a class, familiarizing and normalizing college,” she said. “If that is a photography class, basketball class, PE, whatever it is, that is what they’re going to support. Overall, we’re getting them across the street and showing them a new environment, and normalizing college.”