Arizona Sen. John McCain and Illinois Sen. Barack Obama both made a clean sweep in the "Potomac Primary" Tuesday. Each won primaries in Virginia, Maryland and Washington, D.C.
U. S. Sen. Barack Obama now leads the race for the Democratic presidential nomination.
"This movement won't stop until there's change in Washington. Tonight, we're on our way," declared Obama at an ecstatic rally in Madison, Wis., where he currently is campaigning ahead of the state's Feb. 19 primary.
"This is what change looks like when it happens from the bottom up," he told the Madison crowd in the televised speech. "This is the new American majority."
In Tuesday's Potomac Primary – Washington, D.C., Maryland and Virginia – Obama  increased his number of pledged delegates to 1,215 compared to Clinton's 1,189. That makes eight wins in a row for Sen. Obama, who also won primaries in Nebraska, Louisiana, the Virgin Islands and caucuses in Maine and Washington state last weekend. Obama's weekend and Tuesday wins came as no surprise. Polls have long shown him as favored in those states.
The Clinton campaign appears to be moving forward after its string of defeats, anticipating comebacks in big primaries such as Texas with 193 delegates and Ohio with 141, both on March 4. After that primaries in Pennsylvania, on April 22, and North Carolina, on May 6, also offer the big prizes. 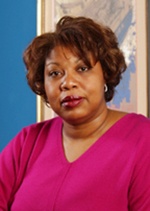 However, Sen. Clinton has made changes in her campaign staff over the weekend, replacing chief of staff Patti Solis Doyle with former chief of staff Maggie Williams. Currently Clinton is campaigning in Wisconsin, where she is scheduled to attend a Democratic Dinner in Milwaukee on Saturday.
With Democratic voters turning out in record numbers and 18 primaries remaining, the nomination battle is far from over. Analysts say unless something changes the result may be up to the superdelegates, the 796 Democratic Party leaders and elected officials who are not bound by primary voting results. Superdelegates will vote alongside of pledged delegates in the National Democratic Convention set for Aug. 25-28. Clinton holds the lead in superdelegate endorsements with 245 to Obama's 143 – including Florida and Michigan.
Eleanor Holmes Norton, who is a superdelegate for Washington DC, announced her endorsement of Obama Tuesday.
"Barack will be an exceptional president," she said in a statement. "He is the president that our country, our party and this city needs at this turning point in our history."
Holmes said she had expected to make her endorsement closer to the general election. However, she explained that she felt the need to announce her choice in order to commit her super delegate vote to Obama if it is needed in a tie.
Despite what appears to be an Obama craze of sorts sweeping the country, even he realizes the race is not nearly over.
He told the cheering Wisconsin crowd, "We have much further to go."
In the Republican nomination battle, Sen. McCain pulled off a narrow victory over Arkansas Gov. Mike Huckabee in Virginia, with 50 percent of the vote compared to Huckabee's 41 percent. In the Maryland primary McCain won 55 percent of the votes compared to Huckabee's 30 percent. In Washington DC, McCain's victory was more decisive with 68 percent of the votes to 17 percent for Huckabee. Sen. McCain now has 827 pledged delegates compared to Huckabee's 217. Massachussetts Gov. Mitt Romney won 286 delegates before leaving the race.
Despite Tuesday's victories and his position as the clear frontrunner McCain still faces opposition from some conservative Republicans. Gov. Huckabee has said he will remain in the race until McCain wins the 1,191 delegates needed to secure the Republican nomination. Exit polls from Virginia show that conservative and evangelical voters still support Huckabee. And even though Gov. Romney has withdrawn, he drew about the same percentage of votes in the Potomac primaries as Texas Congressman Ron Paul.
After Washington state's Republican caucus Saturday, the Huckabee campaign said it would contest the result because state Republican officials had called the close race for Sen. McCain before all the precinct decisions had been counted. In a statement, Ed Rollins, Huckabee's campaign chair, said: "Washington state Party Chairman, Luke Esser, chose to call the race for John McCain after only 87 percent of the vote was counted. According to CNN, the difference between Senator McCain and Governor Huckabee is a mere 242 votes, out of more than 12,000 votes counted—with another 1500 or so votes, apparently, not counted. That is an outrage."