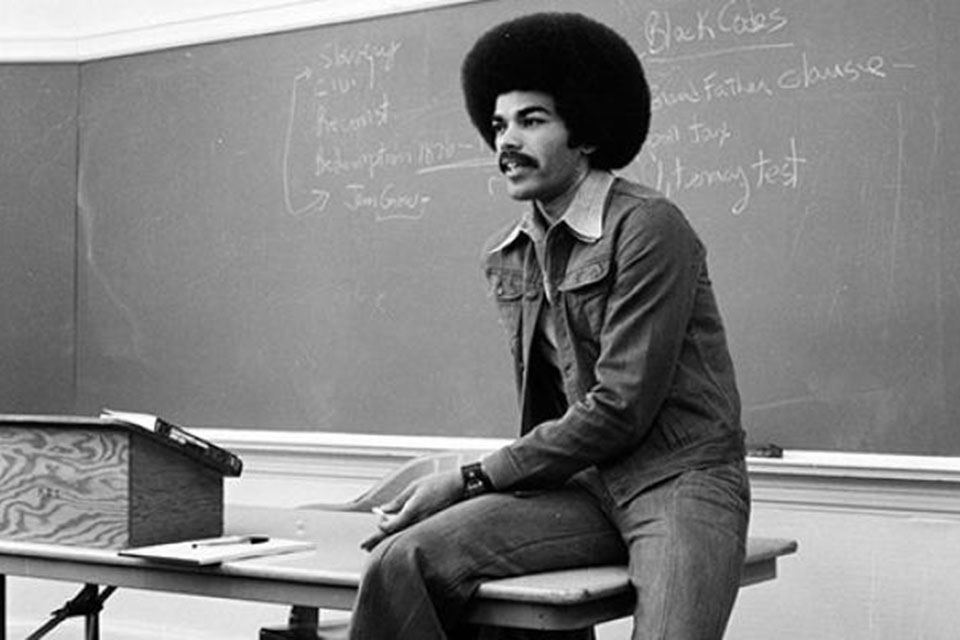 The Black Studies Department at Portland State University turns 50 next year, and according to faculty, it’s a hard-won anniversary--and a cause for celebration.

Professor Emeritus Darnell Millner has been with the department for 45 of those years, and recalls that 1970 saw the launching of many ethnic studies departments around the country. 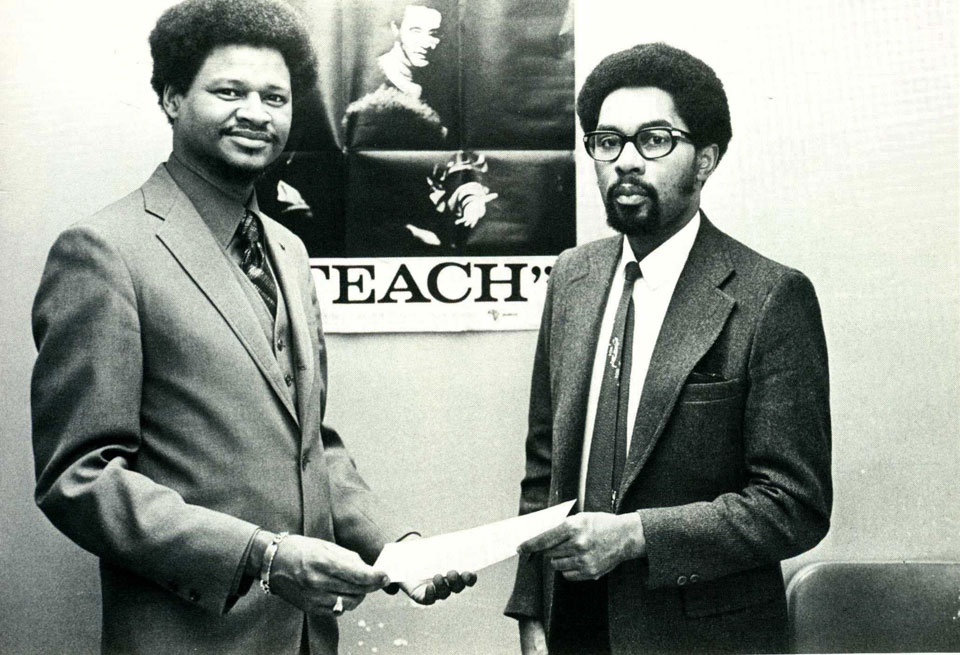 Director of the Black Studies Center Lenwood Davis (left) awards the first certificate ever issues in Black Studies at Portland State to Clarence Barry in 1972. (Photo from 1972 Viking yearbook, courtesy of PSU)“Higher education had not done a good job of looking at our past, or the sociodynamics of the country, the cultural dynamics, in an honest and diverse way,” Millner told The Skanner. “It had been committed to a very Eurocentric view of both the past and the present, and the assumption that it would be the same in the future. And so what even a small Black Studies department was able to do was to begin to change the intellectual and academic environment on a university campus in ways that were pretty remarkable and unpredictable.”

But establishing those departments was a community effort.

“The Black Studies department here and in many other places around the country was created basically by the activism on campuses of the Black student unions that had been created in the late 1960s,” Millner said. “And also, by the involvement of the Black communities around the nation and here in Portland that didn’t feel like higher education was doing a very good job in addressing the needs of Black people or the Black community.”

Millner said that across the country, many old guard university administrators and faculty looked down on Black Studies as “a political movement rather than an academic one,” often arguing that ethnic and women’s studies were not legitimate disciplines on a college campus.

Ultimately faculty, administrators and members of the public who saw the positive in Black Studies won out--especially at public universities like PSU. 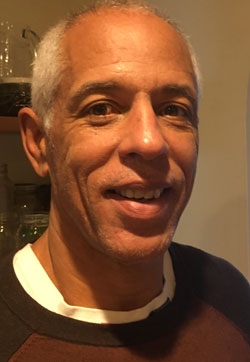 Prof. Ethan Johnson is chair of the Black Studies program at PSU.“The contradiction was that the universities were saying ‘This is a place where you can achieve, you can gain access to mainstream resources,’ but they were coming up against explicit and implicit forms of anti-blackness,” Prof. Ethan Johnson, chair of Black Studies at PSU, told The Skanner. “And so they organized, and I think public education--specifically because it’s based on our tax dollars--became a central place for the struggle.”

Millner recalled coming to the university as a young history teacher.

"Our generation essentially created that new career path out of whole cloth.”

But Black Studies remains the smallest department at PSU, and some faculty are concerned by what they see as a lack of support from the university. Johnson confirmed Black Studies has only ever had four tenured full-time professors at a time, and will be losing two this year with the retirement of Dr. Derrais Carter and Dr. Winston Grady-Willis. Johnson said that PSU administrators have indicated there is no funding to hire their replacements.

“The already dire representation of Black faculty and staff on campus will be even further diminished,” he warned.

Dr. Pedro Ferbel-Azcarate, an assistant professor who has been with the department for more than 20 years, agreed that “lack of institutional support” was a burden to Black Studies faculty.

“We’re supposed to be teaching classes and doing research, but we’re always in a crisis mode.

"And we don’t get enough support to even resolve conflict in our own department,” Ferbel-Azcarate told The Skanner.

Johnson pointed out that 10 Black faculty and staff members left PSU in the past year, and argued that the university struggles with the retention of Black employees and students alike.

“Oregon has the highest dropout rate for Black high school students in the country,” Johnson told The Skanner. “And similarly, at Portland State, Black kids have the lowest graduation rate, even though academically they perform on par with other comparative groups. So it’s more a question of the financial resources that they don’t get, which keeps them from graduating.”

Johnson doubts the university’s assertion that budget constraints prevent his department from being able to maintain its faculty size.

“They’ll build a stadium for basketball, which is mostly for young Black men to play, but they won’t invest in our intellectual development,” he said. 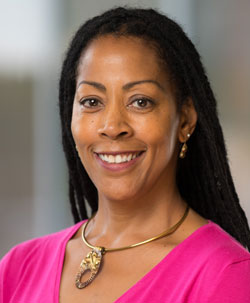 “I started at Portland State in January 2016, and was doing my part in terms of making sure that we were involved in the community,” Jackson told The Skanner. “I wanted to have this connection where we’re not just simply this department that lives in a vacuum. We came about because of the community and the support that they gave us when we were in our very early stages. And that to me was something that could not be overlooked. But prior to my coming to Portland State, it seemed as though no one was really doing that in the department.”

Jackson also expressed frustration with the number of Black employees who had left the university in recent months, and said she is working with the president’s office at PSU to explore the possibility of reinstating a campus-wide ombudsman to better serve students and staff who experience inequity at the school.

Jackson told The Skanner she filed a complaint with Oregon’s Bureau of Labor and Industries last month in response to what she described as unequal treatment from her male colleagues, as well as a number of incidents on campus and within the department that made her feel unsafe. She said that PSU administrators were unresponsive to her requests for support.

PSU’s Black Studies department has outlived many similar departments at public universities nationwide. Millner told The Skanner this was due to the fact that PSU has always committed to funding the department through its budget, while many other departments depended on government funding that was subject to changing political tides.

“That doesn’t mean it was easy,” Millner said. “Because in the 50 years since Black Studies got started here, the Oregon university higher education system has gone through many periods of crisis, many periods of reduced commitment. And it was always a battle to protect your budget, to have the resources to continue. You always had to fight for that, and you still do today.”

Johnson points out that unlike most public universities, there is no Ethnic Studies general education requirement at PSU--a mandatory course that typically drives students into areas of study they might not have considered, and which could capture their interest and potentially lead them to a new major or minor.

“People who potentially gain the most from a Black Studies experience are people from the majority culture, who because of our history and because of the way that society was organized and because of the legal nature and the institutional nature of separation and segregation and Jim Crow laws, before they get here, they’ve had very little opportunity to learn the history of a race or a group other than their own. So it’s eye-opening for them.”

Ferbel-Azcarate, who identifies himself as the only Black Studies faculty member not of direct African descent, says that despite the ups and downs in his department, he sees reason to hope.

“I am finding that students, at least in PSU, will arrive in our classrooms with a greater awareness and knowledge around race and identity,” he said.

Ferbel-Azcarate describes the department as “both interdisciplinary and multidisciplinary.”

“I’m an archaeologist, Darrell’s a historian, Ethan does work in education, Shirley’s a sociologist,” he said. “Some people are Black Studies-focused. So you get exposed to different ways of approaching a topic: the multidisciplinary of it, and the interdisciplinary of it, makes it like a great place for critical thinking, and for the consideration of multiple perspectives.”

“It changes the dynamic of the discussion,” Millner agreed. “And it opens up possibilities and considerations that had not existed before those kinds of programs existed on college campuses, and that’s probably what I’m most pleased and satisfied with in terms of the contributions that a department like Black Studies can make to a university community.”