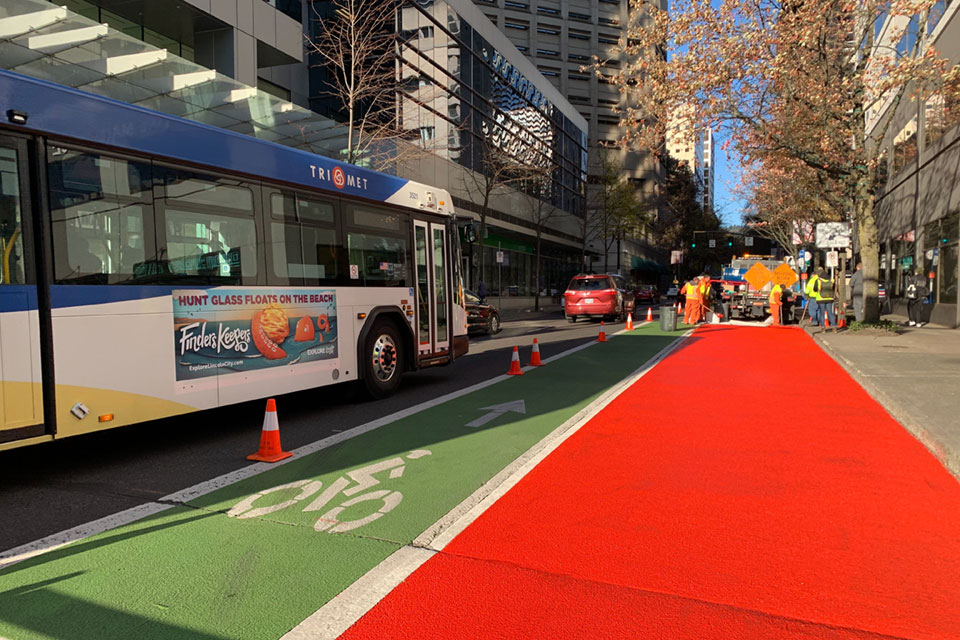 Portland Bureau of Transportation (PBOT) crews are installing Portland's first red bus lane on SW Main Street between First and Second avenues. The work started at 9 a.m. today and should conclude at 2 p.m. Both the bus and bike lanes on SW Main Street will be closed during this time, and travelers should expect some delays.

The project on Main Street is part of a broader effort by PBOT to support better, more reliable bus service with innovative tools. The Federal Highway Administration (FHWA) has given permission to a number of U.S. cities, including Portland, to use red paint to signal to other road users that buses, streetcars, and trains have priority.

Quicker transit seen as a way to combat climate change

"We cannot combat climate change without dramatic changes to the way we currently live, and Portland traffic congestion is among the worst in the nation," said Commissioner Chloe Eudaly. "Quicker, more reliable transit will be a powerful tool in our efforts to confront these two fundamental challenges. These new red lanes signal our commitment to doing everything we can to make transit an attractive option for more Portlanders and prioritizing tangible climate action in the face of looming climate catastrophe."

PBOT is partnering with TriMet, Metro, Portland Streetcar, and Portland State University (PSU) on the red transit lane project. The goal is to see if adding red on the pavement helps increase drivers' understanding and compliance in transit priority lanes. PSU will help collect before-and-after data and report on performance evaluation. Together these partners requested permission from FHWA to experiment with this new tool; the federal agency approved Portland's application earlier this fall.

"We are excited to try out this new tool to support our region's transit system," said PBOT Director Chris Warner.

"I want to thank our partners on this project. When we make transit better, we improve our region’s livability, making it easier and more convenient to reach jobs, schools, appointments, and events”

“Metro is pleased to be an early funding partner in the planning and implementation of the project on SW Main Street,” said Metro Council President Lynn Peterson. ”We are excited to see this project move ahead and look forward to more of these types of improvements around the region.”

“We’re working together to speed up buses and keep them moving through traffic," said TriMet General Manager, Doug Kelsey. "Faster, more reliable trips make transit a more attractive option. The more people who ride – the fewer cars are on the road and the less congestion for us all.”

The red lane has rules

Red lanes are transit priority lanes where other modes are prohibited or allowed limited use.

People driving may not enter a solid red lane, including drivers of cars, trucks, taxis, and ride-hailing vehicles like Uber and Lyft. Red does not change how the lane can be used. The lane is still defined by the markings, signs, and signals on the road. Red makes the transit priority lanes more visible. Red can help reduce the number of drivers improperly driving in transit lanes. In some locations, cyclists may use red lanes, where indicated by signage and markings.

Other cities that are experimenting with this new tool, have helped make bus service more efficient by decreasing conflicts between buses and other road users.

In New York City, lane violations fell by approximately 50% and illegal parking/standing in transit lanes decreased by over one third. Red lane treatments have contributed to fewer collisions and better driver behavior. In San Francisco, overall collisions dropped by 16%.