Lone Oregon GOP Congressman to Retire; Seat up for Grabs 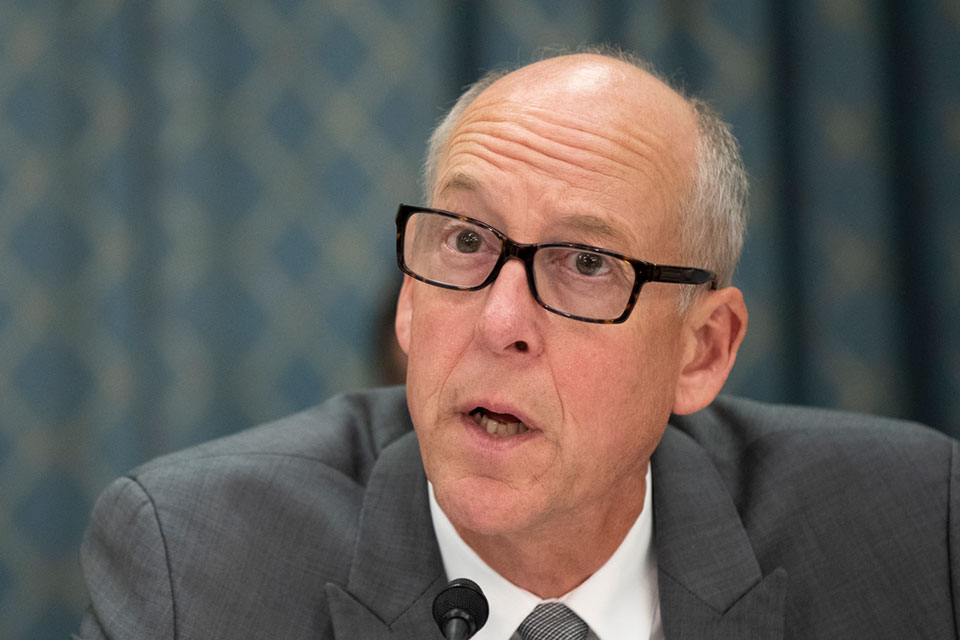 SALEM, Ore. (AP) — The lone Republican in Oregon's congressional delegation won't seek reelection to a 12th term, throwing a huge district covering a conservative part of the state up for grabs.

With less than seven months to go before the 2020 primaries, Rep. Greg Walden's videotaped announcement on Monday sets up further changes in the U.S. House of Representatives, which Democrats regained control of in the 2018 midterm elections.

Walden is the 19th House Republican to announce he or she will not seek re-election. Three other GOP lawmakers have resigned.

Walden is a former chairman of the powerful House Energy and Commerce Committee and now serves as the top Republican on the energy panel. He was a key player in GOP efforts to replace President Barack Obama's health care law but was considered a moderate.

McLeod-Skinner indicated she was considering her options.

Walden said he could have won the next election

Walden said he could have won the next election based on recent polling and strong fundraising. But he said he will instead pursue new challenges and opportunities.

Walden, 62, did not specify what he wants to do next, but it won't be running for a different political office.

"I will not seek re-election to the U.S. House of Representatives, nor election to any other office, but instead I will close the public service chapter of my life, thankful for the friends I've made and the successful work we've done together," Walden said. He addressed the camera from the deck of a home with a backdrop of tall fir trees.

Walden is a former radio station owner and was first elected to represent Oregon's 2nd Congressional District in 1998. The district of 70,000-square-miles (180,000-square-kilometers) covers high desert, mountains and forests and is the second-biggest in America among states with multiple districts. Far from the liberal Portland metro area, the district voted overwhelmingly for President Donald Trump in 2016.

Walden likely would have had an easy path to re-election, though parts of the district, like the outdoorsy retirement mecca of Bend, have become more liberal.

A town hall that Walden staged in Bend, in 2017, became raucous as constituents packed into a high school gymnasium clashed with him on issues like gun control, health care, immigration and the environment. Walden told the town hall he was not a climate change denier and that he supports renewable energy. But he took flack for backing construction of a pipeline was halted amid protests in the Obama administration, but later approved by Trump.

Walden grew up on a cherry orchard and is from Hood River, a town along the scenic banks of the Columbia River.

Like Bend, the demographics of surrounding Hood River County have also been changing. In the 2008 election, Walden won almost double the votes in the county as his Democratic challenger.

Jamie McLeod-Skinner ran against Walden in 2018

In 2018, McLeod-Skinner -- who ran a tireless campaign, touring the vast district in a Jeep pulling a teardrop trailer that she slept in -- turned the tables and received 6,735 votes in Hood River County compared with 3,578 for Walden.

"Walden's decision not to seek reelection demonstrates the power of our efforts last year to flip the House and establish accountability," McLeod-Skinner said in a telephone interview. "Since his statement, I've received a lot of calls, and I'm going to take a little time to return them."

Rep. Tom Emmer, R-Minnesota, chairman of the House GOP campaign arm, said Walden assured him that he will remain heavily engaged in ensuring his seat remains in Republican hands.

"This is a solidly Republican district, and it will remain so in 2020," Emmer said.

Rep. Kurt Schrader, a Democrat from Oregon, said he was honored to represent Oregon alongside Walden. He was "always working to promote bipartisanship and fairness," Schrader said.

Oregon District 2 Indivisible would like to acknowledge the upcoming retirement of our congressman, Greg Walden.

ORD2 Indivisible has devoted 2½ years to holding Walden accountable for votes, legislation and his reliance on large corporate donations during the Trump presidency. Our 2,000+ members have made thousands of daily phone calls, dozens of visits to his offices, and held regular rallies across the district. We have questioned his positions on such issues as health care, immigration, climate change, election security, and the current impeachment inquiry.

When he tried to repeal the Affordable Care Act and replace it with a plan that even Trump called “mean,” we were there. In 2018, we held a cross-state “Where’s Walden Rally” from Ashland to Hood River when he had gone almost 600 days without holding a town hall anywhere in District 2. And next month, ORD2 Indivisible will (still) hold a party “celebrating” Walden’s induction into the $1 million Big Pharm Donation Club.

It has been our duty and responsibility to hold our members of Congress accountable every single day, and in the case of Greg Walden, we feel we have been successful. We would like to acknowledge that being a Republican these days is difficult when you are under the thumb of a president without morals, without respect, and without a clue about how democracy works. We certainly feel Mr. Walden’s pain.

But -- deciding not to run in 2020 will give him a chance to summon his courage, find his moral compass, and do the right thing for the people who live in Oregon’s District 2. Greg Walden has one more year, and we promise we will be holding him accountable -- to the last day.

ORD2 INDIVISIBLE is a grassroots campaign devoted to keeping our members of Congress accountable and resisting the Trump agenda. It is based on the INDIVISIBLE Guide, with the goal of preserving a free press, voting rights, civil rights, environmental protections, health care, and the protection of our nation’s most vulnerable citizens. It is based on the values of inclusion, tolerance and fairness in its fight for democracy.