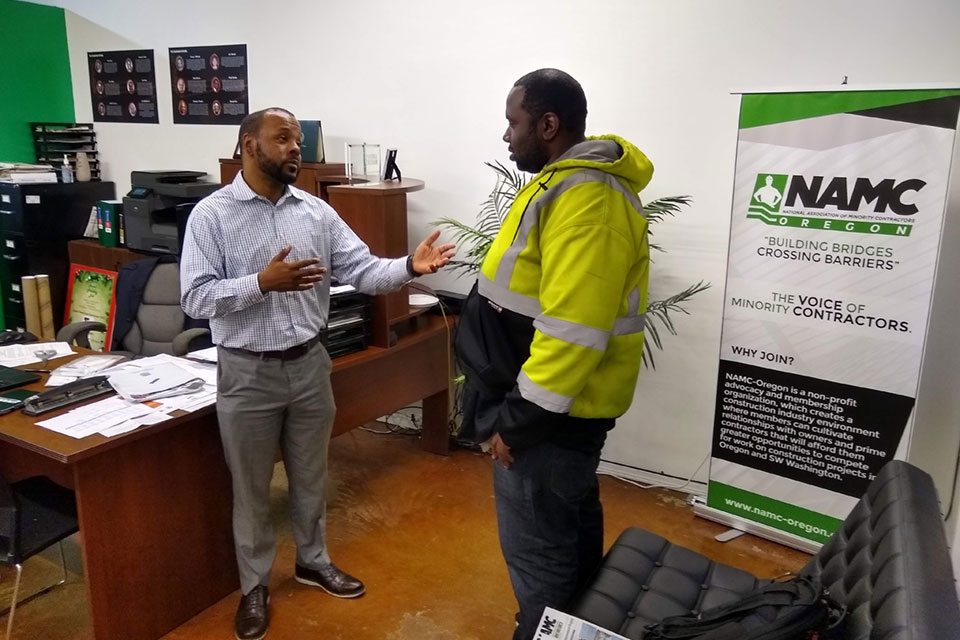 When the Portland City Council voted to re-appoint Nate McCoy as chair of the Portland Housing Advisory Commission earlier this month, it was largely in recognition of his focus on equity in access to affordable housing. But the additional two-year term also draws on McCoy’s specific area of expertise: equity in who is paid to build that affordable housing stock.

McCoy serves as executive director, operations manager and spokesperson for the Oregon chapter of the National Association of Minority Contractors (NAMC-OR), a trade association that advocates for minority contracting professionals. He told The Skanner that it can be hard for smaller, minority-owned firms to compete with larger, more established contractors, even at a time when commercial and residential development in booming. While many recognizable names in construction can boast more than a century in business, the NAMC-OR member with the greatest longevity is only 20 years old. “Mid-point” contracts, like those offered on affordable housing projects, have proved ideal for NAMC-OR members.

“I think just making sure that I’m always holding all of our programs and processes accountable, to make sure there’s always that equity, on how we’re thinking and making decisions, and I’m always that constant reminder at the Housing Bureau,” McCoy said.

The 12-member advisory commission is a public forum for housing policy in Portland, and includes community organizers, representatives from the real estate, legal, construction and banking sectors, as well as many who have worked in affordable housing. McCoy’s education in that field came early.

“I moved in seventh grade alone to three different apartment buildings, all due to price increase in rent,” McCoy, a Portland native, said. “That’s why I have a passion for housing, but also the business and workforce side. If you don’t have a good-paying job, you’re forced to be in those conditions where you can be displaced at any moment.”

A former construction coordinator for the housing bureau and for the Portland Development Commission, McCoy said he had long noticed the economic opportunities in an industry that too often operated as a “good ole boys club.”

Workers of color “often don’t get rained up to be superintendent or foreman, they get dedicated to labor on-site,” McCoy said.

“Construction has not done its best job in marketing itself as a career pathway for all communities.

"We’ve coined it ‘the FBI,’ because the way to get into construction is through your father or brother-in-law. Most of our businesses on the minority- or majority-owned side have been family-owned businesses. But I’m looking at affordable housing, knowing a lot of minorities live in it.

"They should see folks who look like them building the projects.”

“They do great grasswork work of outreach in schools,” McCoy said. “Too often, it’s been the classic case of older White men telling students of color about the industry. The students have no representation. And no one wants to be in something where they feel they might be the only one. We’ve got to reflect diversity, and that means sending messengers that might look like some of the kids you’re trying to attract to the industry. We do a lot of that. I take a lot of kids to different housing projects as well as other just projects that our members are on, to make sure these kids can see professionals. Not just athletes, but professionals” in attainable careers.

Those careers offer the kind of upward mobility and salary that can lead to homeownership, which then opens up additional affordable units, McCoy added.

Getting Opportunities But Not Work

Coleman, who is African American, told The Skanner of his experience losing business with a large Boise-based contractor that had hired his firm in the past. Nothing had changed except for an in-person courtesy call between Coleman and the contractor’s higher-ups.

“We lost all of our business, just because they met me.

"And I’ve had that happen several times. When people talk to me on the phone, they hear a British first name, Irish last name, and then when we meet, they do a double-take.”

Coleman emphasized the value of employing a diverse work crew. For him, that includes the White project manager he often asks to take the lead on communication with clients.

“It’s not that everybody’s racist, but the powers that be, they’re very selective,” Coleman said. “They can give you opportunities, they can ask you for bids, but they don’t give you work. It’s in the rhetoric you hear: ‘It’s just not a good fit,’ or ‘They’re just not seasoned enough.’”

Much of McCoy’s work has focused on building strategic partnerships with larger construction firms.

“The first thing is having a shared value around what diversity, equity, and inclusion really means, not just as buzzwords,” McCoy told The Skanner. “People love to put those buzzwords on proposals, and I think it really starts with intentionality around the relationship, around retention. Are you really advancing these people or just bringing them in, and they find themselves struggling and isolated and taking themselves out of that equation?

“What we try to do at NMAC, we bring all of our members and partners together, build a relationship, and make sure no one feels uncomfortable about asking those questions: ‘How do you guys do equity and inclusiveness on your side?’ A lot of it is just being real with people.”

And that is important, because for McCoy, collaborations between NAMC-OR members and larger partner agencies are key.

“The way you cut into that is to see if people have shared values of partnering together,” he said, giving as an example the “added value” when smaller minority firms partnered with Andersen Construction in the recent Grant High School renovation. “That allows smaller firms to build their systems quicker, to train their younger junior employees and their project managers. We stress that to our (partners), we incentivize them to do that on major projects, because they’re growing other entities that will be viable in the minority contracting community.”

He argues it is in the construction industry’s best interest to be more inclusive.

“The construction industry here is booming, the amount of people they’re able to attract in is not even starting to scratch the surface of the need,” McCoy said.

“And when you’re more inclusive and diverse, your bottom line increases versus decreases.

"[The larger contractors] don’t want to feel like they’re bringing someone along to diminish their profits. We’ve been able to show that in multicultural partnerships, that does occur in a positive way.”

For a case study in diverse collaboration leading to a successful affordable housing development, McCoy points to the Magnolia in the Eliot neighborhood. McCoy served as construction manager on the project, which was helmed by Innovative Housing, Inc.

“A White-led nonprofit does affordable housing, they do it well, and they do have a lot of minority goals they put and apply on their projects,” McCoy said. “I just remember really trying to incentivize this nonprofit to go high and go bold with minority inclusion. We hit a 30% goal.

"They’ve gotten more projects as a result of hiring more inclusive contractors and making sure they’re challenging their projects to go further and go bigger when it comes to diversity.”

Phase two of the development is currently under construction, and amenities include a ground-floor makerspace that will be open to organizations like Oregon Tradeswomen, Inc., as well as tenants themselves.

“That’s the North star for me,” he said. “Going back, I was one of those young people in affordable housing 8 project, I had nothing like that. I couldn’t walk down to that unit to my ground floor to do something crafty with my hands. I can’t name another project in the state that has that.”

“Talk about inclusiveness. Here you have [Portland Community Reinvestment Initiatives Inc.], a culturally specific housing provider, led by Black and Brown people as developers, and then they partnered with a major developer [Colas Construction]. It was led and finished with a lot of minority inclusion.”