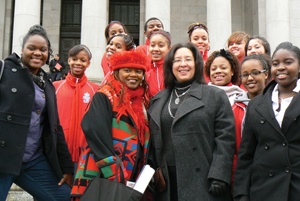 Twanda Hill, Executive Director of Festival Sundiata, (red hat and scarf) stands next to Rosalund Jenkins, (black jacket) Executive Director, WA State Commission on African American Affairs along with members of Wilson Fame Step Team of Tacoma during the 2008 African American Legislative Day on Feb. 4 in Olympia, Wash. More than 1200 adults, youth and children participated in the annual event, where they had an opportunity to meet and talk with their state legislators.

Nearly 1,300 people converged at the state capitol building Monday for the 2008 African American Legislative Day in Olympia, helping to raise awareness and issues affecting African Americans in Washington State.
Sponsored by the Commission on African American Affairs, the event included adults and children bused in in large motor coaches from various schools, churches, organizations and businesses in Tacoma, Bremerton and Seattle. They attended morning workshops on issues such as health care, education, and the child welfare system; youth programs, legislative work sessions, an all-ages rally on the capitol steps and finished the day with a ministers prayer circle. Attendees also had the chance to meet with their local legislators and tour the capitol and rotunda.
During the rally, Gov. Chris Gregoire, Sen. Rosa Franklin, King County Executive Ron Sims and Rep. Eric Pettigrew spoke on the importance of better health care and education for Washington's children.
"The key to a better life for Washingtonians is an education system that prepares our children to thrive in a global economy," Gregoire said. "In the past three years, we've made significant investments to create a world-class, seamless education system for all of us."
The governor spoke on improvements that have been made including all-day kindergarten, a new focus on math and science in elementary and high schools and more enrollment slots in colleges and universities.
"African American boys and girls are going to have a better chance to learn in school, and the disparity between them and White children will shrink with Representative Eric Pettigrew's action agenda for education," Sims said. "His legislation and Governor Gregoire's efforts to provide a seamless education system for all are providing the strategic path that will help end the achievement gap and help more African American children have all the opportunities that a good education delivers."
Two African American legislators have recently introduced bills aiming to bring about important issues to African Americans.
Rep. Eric Pettigrew-D 37th District, introduced House Bill 2722 to create a strategic task force on reducing the achievement gap for African American students. At 8 p.m. Monday night, the bill passed.
"Civic engagement is very important," Pettigrew said. "It's imperative to stay engaged in the political process and I encourage people to come down and let us know what they think about issues and goals they're working on, and, more importantly, to share ideas on accomplishing those goals together."
Sen. Rosa Franklin-D 23rd District in Tacoma, the state's only African American senator, recently introduced Senate Bill 6205 which created a Joint Select Committee on Sickle Cell Disease.
Franklin encouraged everyone to be proactive and to take positive steps in making sure that the issues and concerns of the African American community are addressed and that the goals are met.
"This is a golden opportunity not only to celebrate the achievements of African Americans who have helped America become one of the greatest nations on earth, it's also an opportunity for people to exchange ideas about solving issues that cut across racial and socioeconomic lines such as access to high-quality, affordable health care and ensuring the academic success of our children," Franklin said.