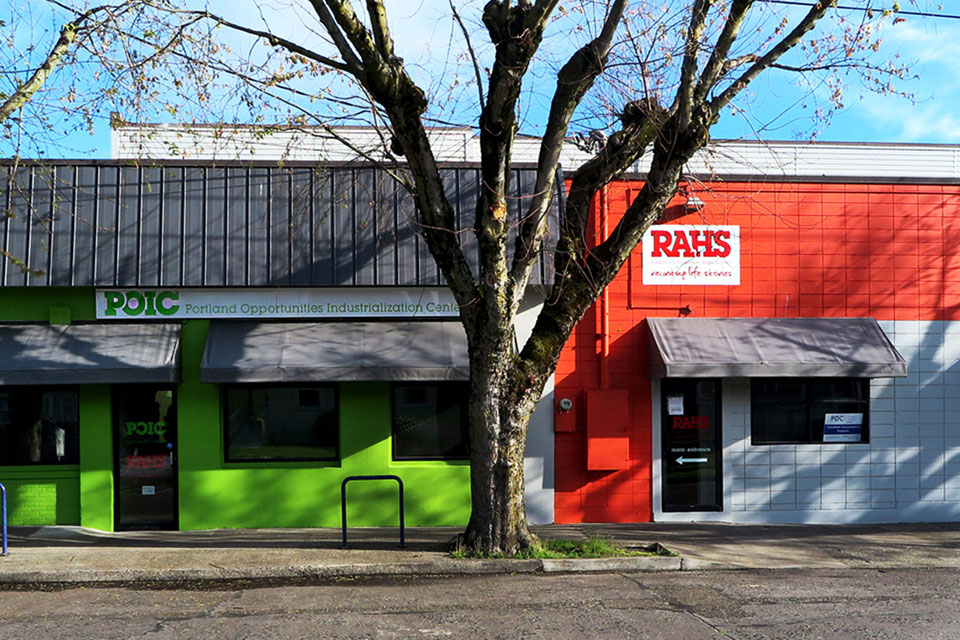 For mental health care specialist Beth Kapsch, success can be as simple as seeing a high school student finish out a full day on campus.

“There have been multiple instances where a student is ready to leave school early, they’re just so frustrated, and we’ve been able to work with them, use coping skills, so they’re able to complete the day,” Kapsch said. “That’s a win.”

Kapsch is one of two counselors employed by Rosemary Anderson High School, which serves more than 700 students a year with education, job training, internships, employment opportunities, parental classes, and certifications, and has been recognized as one of the top alternative high school programs in the state of Oregon.

“The youth at our school are kids [that] come to us because the traditional education system sort of failed them,” Kapsch told The Skanner. “Many of them are coming in with additional responsibilities or challenges -- youth who are living independently, or have a lot of obligations at home, or work to support the family financially.

"We have a lot of youth who have extra responsibilities and burdens, so we can help support them in managing that stress.”

The program began on the Lents campus, with one therapist providing mental health services between the four campuses on an emergency basis. By last April, both Kapsch and Yoswein had joined the program, part of RAHS’s Lead the Change mental health initiative.

The goal is to eventually have one full-time therapist working at each campus, Kapsch said.

“The idea was to get therapists based in the school, so that we could meet kids where they are, literally. And then there’s just a lot of flexibility within each campus,” she said. “I’m able to tailor it to what the campus needs.”

The need for focused mental health counseling on campuses is only growing: A 2016 study out of John Hopkins Bloomberg School of Public Health found that adolescents reported a 37% increase in depressive episodes from 2004-2014, with teen girls reporting higher rates. According to a 2018 survey by the Pew Research Center, 70% of teens identified anxiety and depression as major issues among their age group.

“We have a focus on the mental health aspect and case management stuff, so we can help kids get connected to needed social services,” Kapsch said, explaining that the services she and Yoswein offer are separate from those of the academic advisors who also serve RAHS.

“I do feel that RA is on the forefront of prioritizing kids having access to this kind of service. We have a whole range of issues that we work with. We certainly have a fair number of youth who are struggling with anxiety and depression, and those things can be real barriers to academic success. We also address conflict with peers, conflict with parents or guardians -- students are struggling with typical teen difficulties.”

Access to counseling is especially important at a time when suicide rates among all ages are on the rise nationwide. In 2016, the Centers for Disease Control and Prevention confirmed that suicide accounted for more deaths than car accidents among adolescents aged 10 to 14.

“That is a really important part of the position,” Kapsch said. “I want to be connecting with kids that are feeling that way, to make sure we have a culture on our campuses where we can talk about it.”

Kapsch said that providing therapy resources to students “eliminates so many barriers to service.”

“Kids don’t have to figure out how to get to an office somewhere, there’s no cost, they don’t have to figure out copays,” she said. “I think there’s this belief that mental health services are for people who are really at the end, who are severely depressed. And there’s so much that can be done before someone’s at that point, so if we’re able to connect with kids early on in their struggles, it’s just that much easier for them to get on a good path, rather than waiting until they’re suicidal.”

Research shows that investing in mental health resource staff can have measurably positive impacts on a school’s culture in general: A 2014 study found that adding a counselor to campus could reduce reports of disruptive student behavior by nearly a third.

“I just really love working with adolescents,” Kapsch told The Skanner. “It's just such a powerful time for brain development in your life, with a lot of opportunity for growth and healing. It’s a time when young people are trying to figure out what kind of life they want to create for themselves, so I feel very privileged to help work with young people and help them sort through that. It’s such a privilege to get to sit with a kid when they’re having a really hard time and see them start to recognize their own gift and value, and take that and run with it. I really like my job.”

RAHS’s Lead the Change mental health initiative is largely funded by personal donations. Representatives for RAHS confirmed that an anonymous donor has agreed to match up to $10,000 in contributions to the program. To donate, log into PayPal and visit https://bit.ly/2mfVr9P.