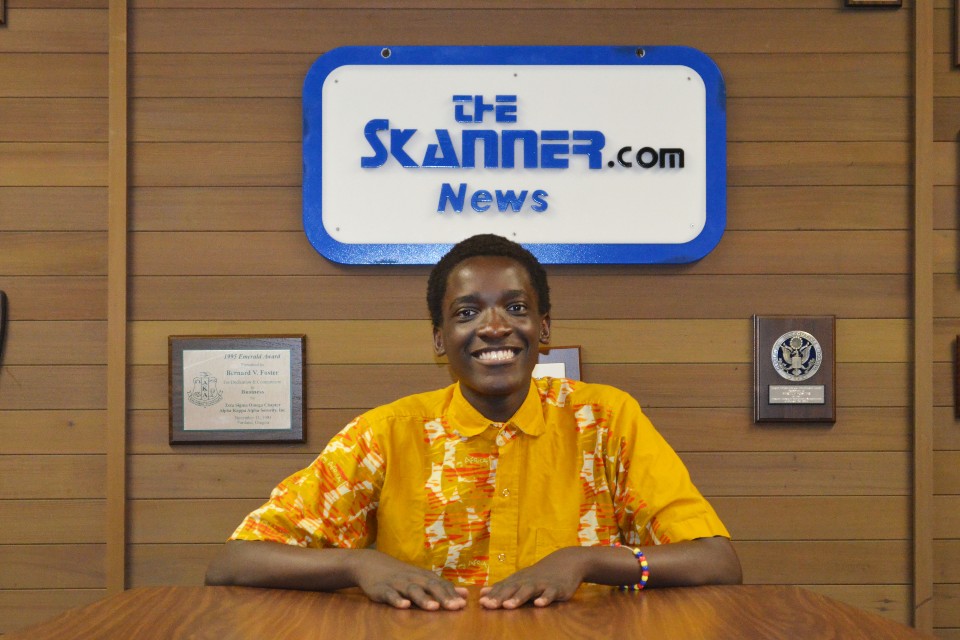 A Portland student born to Congolese refugees is working with local businesses and organizations to send much-needed menstrual products to women in the Congo. The first fundraising event is scheduled for later this fall.

For decades war has ravaged the Democratic Republic of the Congo. Just this June, the United Nations reported that more than one quarter-million Congolese residents were forced to flee eastern Congo as a result of interethnic violence. Consequently, basic commodities are often scarce and expensive.

“My parents are refugees of war from the Congo, so as a result I was born in Zambia in a refugee camp, and so -- having that experience and that understanding constantly of the conflict and the strife that’s going on in the Congo right now -- it really inspired me,” said Asukulu Songolo, a 16-year-old junior at Central Catholic High School in Southeast Portland.

Songolo started The Congo Peace Project earlier this year, and is currently in the planning phase of operations working with businesses and organizations to collect menstrual supplies. The inspiration for the project was sparked after Songolo watched “City of Joy,” a film highlighting the struggles of women in the Congo.

“I knew about the conflict in the Congo and the lack of access to education and other resources, but I didn’t know that menstrual supplies and products for women’s health were so stigmatized and difficult to find,” said Songolo. “As I began to talk more and more with people around my Congolese community in Portland, they also expressed the fact that those [supplies] are super hard to access."

In some instances, Congolese women will turn to risky, unhygienic measures – such as using leaves, sticks or even repurposing other absorbent materials such as mattress padding – as menstrual products. Due to the stigma, lack of resources and even infections from unhygienic practices, young women will miss school during their periods, putting them behind their peers in schools already severely lacking in funding and resources.

“What’s important to know is that it is not necessarily that there are no menstrual hygiene supplies in DRC, but more that many girls and women are not able to access them because they are very expensive. Commercial menstrual pads cost $2 to $3 per month in Congo, a significant sum in a country where the average family earns just $1.30 a day,” said Amy Fairbairn, head of media and communications at Mercy Corps.

Songolo sees The Congo Peace Project as a way to give young women back “a sense of empowerment.” To start, Songolo aims to partner with local businesses, churches and organizations functioning as drop-off locations for the menstrual supplies, with collections starting this month.

The project is something of a family affair, with Songolo describing the original plan as the “brainchild of me and my two brothers.” While Asukulu is organizing the campaign on the Portland front other family members are establishing connections abroad.

“My mother’s actually in the Congo right now and we’re in conversation right now with a hospital and a school that we’re going to start the project in,” said Songolo. “We’re going to try to store menstrual supplies in each restroom... and then try to get supplies for each classroom at a local school in my family’s village.”

Songolo is finalizing specifics on a fundraiser tentatively scheduled for late November at an event space in Southeast Portland. He describes the fundraiser as a small “meet-and-greet, paired with a 20-minute lecture,” with traditional African music and food.

Growing Pains of a Small Operation

While some individuals are moved by Songolo’s bold undertaking, at 16 years old, he notes that his age has been an obstacle, at times, making it difficult to establish logistics and partnerships around Portland.

“[Some people] think it’s very inspiring and some people just think that it’s going to be difficult for me to organize around school and things like that and they think I’m too young,” said Songolo.

Songolo also explains a general lack of awareness about Congolese social issues in Portland and feels the constant need to explain his identity and relationship with the objectives of the project.

“A lot of people don’t really understand [this issue] so I need to go in-depth about the issue and about who I am because I’m a young, African kid who wants to make a difference in his community but it’s more than that," said Songolo.

"A lot of people don’t understand my connection [to the cause] and just my ability to relate to these people,” said Songolo.

Eventually, Songolo imagines a fundraising dinner with traditional African cuisine and music as well as a fashion show to highlight the unique cultural styles of the African continent. If he could have any speaker deliver the keynote at his “dream” event it would be motivational speaker Lou Radja, who has also helmed social projects across the Congo.

“But my dream-dream speaker would probably be Dikembe Mutombo,” said Songolo referencing the Congolese-born humanitarian and eight-time NBA All-Star.

Songolo is taking the growing pains of his start-up initiative in stride while keeping his eyes on the long-term goal. This comes as no surprise for a young man whose email signature includes a quote from the late Steve Jobs. That said, Songolo is looking ahead while optimistically concentrating on the larger objective.

“‘If not us, then who? And if not now, then when?’” Songolo asks, quoting a line most often attributed to Rep. John Lewis. “That’s always the question that’s on my mind, so whenever I get overwhelmed that’s kind of what I think about.”