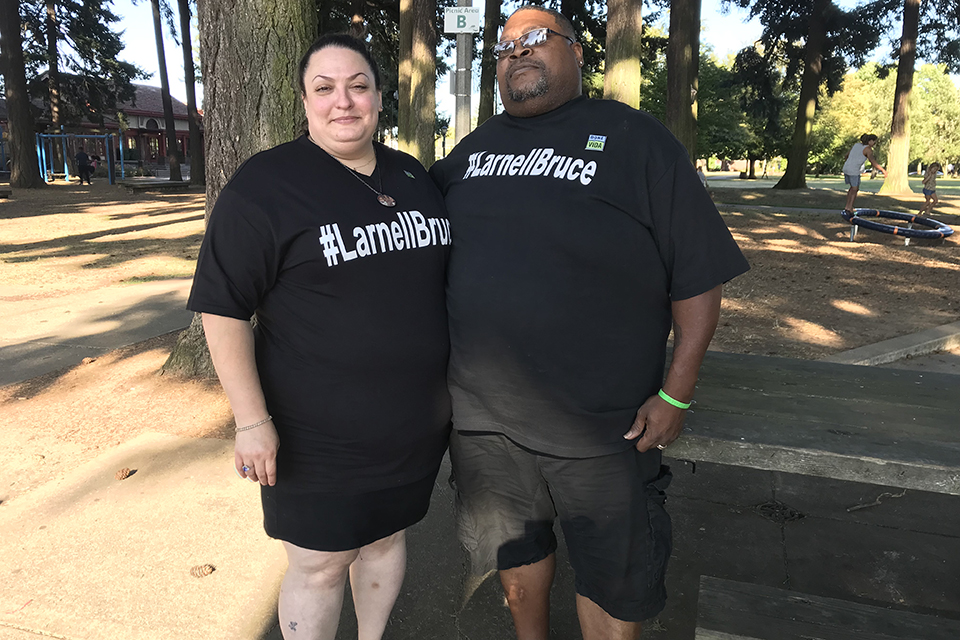 Larnell Bruce Jr., would be 23 this Sunday. He was killed three years ago this month, hit and killed by a White supremacist whose girlfriend cheered as he chased Bruce in a car.

The family has not seen it – it aired on British television Sunday and Monday, but has yet to air in the U.S. or be posted to the BBC’s streaming services, though an extended audio clip from the film is available. On the heels of the trial and their advocacy for change in Oregon’s hate crime statute, the Bruces are now working to help other families affected by racist violence.

“I didn’t have a place to release the negative energy,” Larnell Bruce Sr. told The Skanner.

“It would be hard to talk to a White counselor. I couldn’t be myself.” After looking for a year, he said, he just gave up, though he still struggles periodically with feelings of intense grief and anger.

The family also wants to use the foundation to provide and advocate for material assistance they needed and didn’t get during the immediate aftermath of their son’s death and the trial of his killers, as well as victim’s advocates in the courtroom, and assistance with things like parking and meals.

Better advocacy might also have helped keep the family and killers apart in the courtroom: Larnell Bruce Sr., was banned from the court room for six months, the family said, after lunging at Courtier, who was walked past him every day on the way to trial.

One reason for the lack of advocacy specifically around hate crime trials is that offenders often accept a plea deal, avoiding trial altogether, Natasha Bruce said.

The Bruces are proud of the impact their son’s legacy has had so far: as an organ donor, they said, he helped save five lives. The state’s hate crime statute has been renamed from intimidation to bias crime and situations like the Bruce murder would be a felony, rather than a misdemeanor. The state has also added “gender identity” to its list of protected categories, and is tasked with better tracking hate crimes and creating a hotline for reporting.

“They fought and fought for a hate crime [charge]. All the time I thought there would be more punishment for him,” Natasha Bruce said.

The family is also hoping to create more awareness of White supremacist groups. Natasha Bruce told The Skanner that during the pretrial hearings and the trial process, she received an extensive education on the history and proliferation of hate groups in the Northwest.

“We’re hoping we bring some awareness to what’s going on and help people speak up for their neighbors,” Natasha Bruce said.