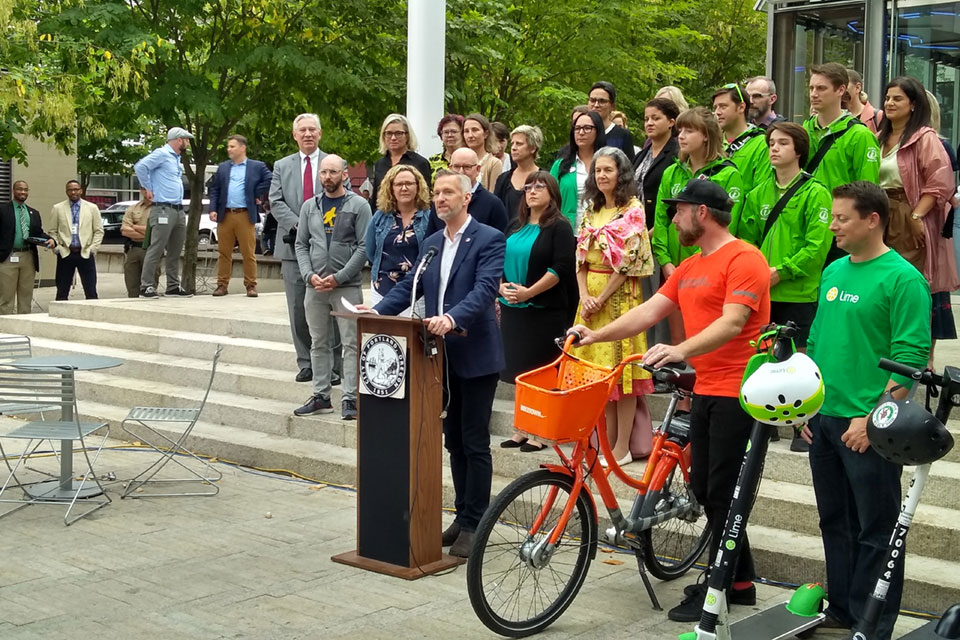 On Saturday the city of Portland partnered with a number of local agencies and businesses in a push to drive more shoppers downtown to make up for the staggering loss of revenue during the previous weekend’s protests. Some local businesses appreciate the gesture,but want the city to go further.

While the Aug. 17 alt-right rallies and counter-protests didn’t lead to the violence the community had feared, they did cost businesses a total of about $3 million in revenue and additional costs that day, according to a survey commissioned by the Portland Business Alliance. In response, the city launched the “Shop. Eat. Play” promotion the following Aug. 24, with free parking on the street and at SmartPark garages, as well as complimentary Biketown rentals and a number of promotions at local shops and restaurants.

The day was meant to be a bright spot after a weekend marked by fear, according to Mayor Ted Wheeler.

“We lost something else,” Wheeler said at a press conference held in front of Travel Portland’s newly opened Director Park Visitor Center on Aug. 21. “We lost the ability to be in our city, in our home, and to enjoy it and experience it the way we should be able to on an August Saturday.

"We’re here today to help take back our city.”

Some minority-owned businesses were enough outside the fray, and are less dependent on a leisurely customer base, that they didn’t notice an interruption to business on the day of the protests. Nor did they notice an uptick in sales last Saturday. Lenora Hall, who owns G Station American Diner inside the Greyhound Station downtown, said that because most of her clientele are Greyhound riders, she didn’t close her restaurant. She also said she was not aware of the “Shop. Eat. Play” initiative.

And while many business owners appreciated the effort, some said they wished that the city had done more to promote it -- and given them time to promote it as well.

“I don’t remember hearing or seeing any brands or businesses talk about it,” Ian Williams, owner of Deadstock Coffee on NW Couch Street, told The Skanner.

Williams decided to keep his shop open during the rally.

“That day ended up being really, really, really slow, to where I was mad we were even open,” Williams said. “But if we had closed, we were going to be giving power to (the far-right rally). We would’ve been succumbing to what they wanted.”

Like Hall, Williams said he did not feel personally threatened by the presence of White nationalists downtown, and said he felt the rally was largely “a lot of noise.” His coffee shop acted as a check-in point for an activist friend who attended the counter-protest, and as a venue for the local Age to Come Apparel’s pop-up shop. Williams regrets that the latter did not get more foot traffic, and that another local business -- Kate’s Ice Cream -- canceled plans to temporarily set up outside.

Williams appreciates the city’s effort, and hopes it sets a precedent for assisting with future interruptions to business.

“It was cool that they did that, but nothing was done when we had all the snow a few years ago,” Williams said. “There was no ‘Hey, let’s make parking free for a week!’ or whatever. We drop down to 25% of our business for almost a whole month” during inclement weather.

“Nobody had any support, I feel like,” Williams added. “The roads were terrible, the sidewalks were dangerous from the ice. It was so bad. Nothing happened then. Because of some protesters on one day, because Starbucks closed eight or nine locations, is that what has to happen? It’s ridiculous. I’m critical of it.

"I’m thankful and appreciative of the move that was made, but I think more has to happen.”

Randall Willhite, owner of PoBoyz food cart on Southwest 3rd Avenue, did not have the option to stay open, as he reports law enforcement asked him and other food cart owners to close down the day of the rally.

“It was not my choice; it was something I had to do for safety,” Willhite told The Skanner.

He said he saw a 10% increase in revenue during Saturday’s “Shop. Eat. Play” promotion. Rather than free parking days, he wants to see the city become more proactive in preventing disruptive rallies, and in making the area around his food cart safer in general.

Willhite says he has seen a number of fights break out among individuals loitering in front of his food cart, and that police only intervene once altercations start.

“I’d say about 40% of my business comes from out-of-town tourists,” Willhite said. “Their number one complaint is that the homeless are scaring them away. When they stand out in front of my cart, I get no business at all. There are no-loitering signs, but the police don’t enforce them.”

Willhite added, “I think Portland’s becoming a target (for demonstrations), and they’re actually making this a place to make a point because the city is a little too relaxed on that. I think (the city) needs to be proactive on taking a stance against that.”

Rolando Mingledoff owns hip-hop club Mingle Lounge on Northwest Everett Street. While he didn’t see impact on business due to the club’s later hours of operation, he says that in general, the two biggest complaints he hears from other proprietors are parking issues and the city’s insufficient response to homelessness downtown.

“There’s a lot of spaces that aren’t permitted to be used, and that’s huge,” Mingledoff told The Skanner. “And then business owners feel there’s a green light downtown when it comes to homelessness. It would be very hard for me to open and operate during the daytime because of it. I’m not impacted the way I hear a lot of other businesses that struggle with it are, but I hear that a lot, and I see it a lot.”

Sales figures from Saturday were still coming in as of press time. Portland Business Bureau’s retail program director reported that in a casual survey of downtown businesses, some stores saw as much as a 20% increase in sales over the same weekend last year.

Iris Hodge, a spokesperson for Main Street Alliance of Oregon Action Fund, praised the city’s efforts to pull together the initiative on such short notice. She called it “a good first step.”

“This swell of hate and fear permeating our national dialogue both during and after the most recent presidential election is dangerous,” Hodge said in an emailed statement. “We believe it must be met head-on with clear statements of principle from local business owners, because we are leaders in our communities.”