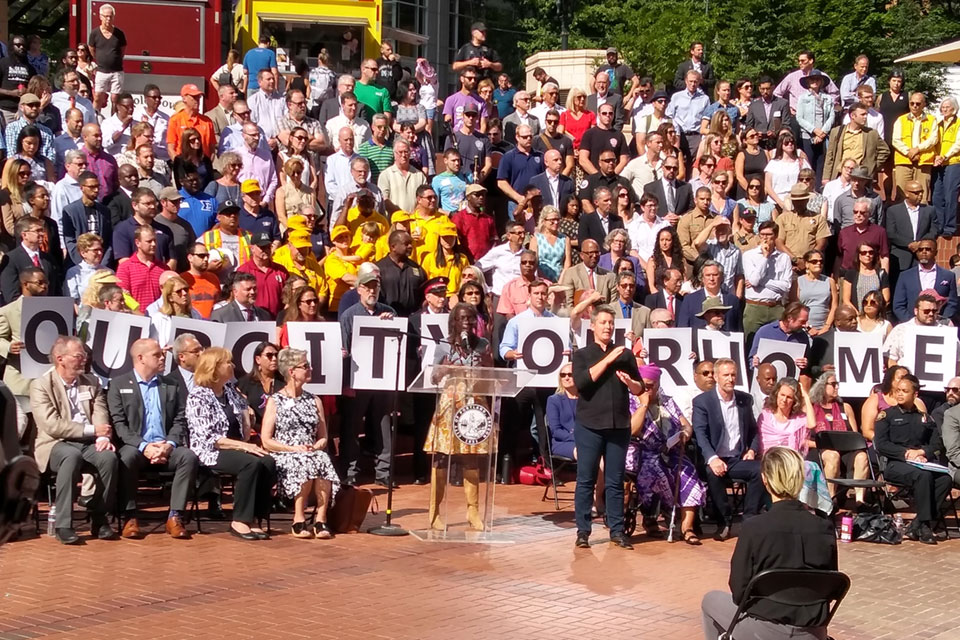 Black community leaders found reason to celebrate in the aftermath of Saturday’s gathering of right-wing extremists in Portland.

“My read of the situation is that we wanted these White nationalists and alt-right leaders out of our community. And the police gave them the quickest and most expedient way to get out of our city, and I feel comfortable with that,” Eric K. Ward, executive director of Western States Center, told The Skanner. “We saw a five-hour rally that lasted for less than an hour, and then (protestors) requested to be escorted across the bridge by law enforcement.

"We have groups who were trying to create the conditions for another Charlottesville.

"They started coming here looking for fights, and this time they didn’t really get that. And then most couldn’t find their way back to their car. I think that really described the day,” he said.

Members of the Southern Poverty Law Center-designated hate group Proud Boys organized the unpermitted rally at downtown Portland’s waterfront, with the stated purpose of getting antifascist demonstrators in the city denounced as a monolithic domestic terrorist organization by officials.

Police estimates total attendance at the protest and counter-protest at about 1,200, with members of alt-right groups numbering about 500. Local media estimates placed the number of Proud Boys at 200 to 300 and the number of counter-protesters at 1000 to 1,200. Law enforcement officials kept both groups apart, allowing Proud Boys members and supporters to exit east on Hawthorne Bridge after a brief demonstration.

Police said they arrested 13 people during the demonstration, most on charges of disorderly conduct, and seized a small number of weapons including bear spray. Alexander G. Dial, 37, was charged with attempted assault in the second degree and unlawful use of a weapon, and Brandon Howard, 33, was charged with assault in the fourth degree and disorderly conduct in the second degree.

“I think the community came out strong,” Kayse Jama, executive director of Unite Oregon, told The Skanner. “It really became more of a festival celebration mood than a rally.

"The community outnumbered the White supremacists in large numbers,” he said.

Ward and Jama said they were satisfied with the police response to the rally, and praised city leadership overall. Such commendations did not come easily.

Last week, Mayor Ted Wheeler held a press conference at Pioneer Square in anticipation of the Proud Boy rally, warning of a zero-tolerance policy for violence. The event featured a more than 80-member coalition of supporting agencies, nonprofits and individuals in the community, with brief speeches by legislators and community leaders. Both Ward and Jama spoke, and both took exception to what they saw as “false equivalences” from city officials that White supremacist demonstrators and counter-protestors posed an equal threat of violence.

“Let me speak first to our law enforcement community: There is no neutral ground,” Jama said at Wednesday’s conference, pointing out that White nationalist groups planning to attend the rally “are well-trained, armed militia.”

At the scheduled start time of the rally Saturday, a handful of White nationalist protesters in paramilitary gear milled around the esplanade of Tom McCall Waterfront Park south of Morrison Bridge, where they were outnumbered by photographers and other members of local and national press. North of the bridge, a larger group of counter-protestors assembled for an adapted Shabbat service led by Rabbi Debra Kolodny in front of the Battleship Oregon Memorial. At one point Kolodny, of Portland United Against Hate, showed the crowd where she’d written the number of the National Lawyers Guild on her forearm.

“My great aunts and uncles had numbers of death written on their arms, and I have numbers of solidarity and support written on mine,” Kolodny said.

“While many of us might have our epigenetic trauma triggered by what’s happening right now, I want to assure everyone that what happened before is not going to happen again.”

Portland NAACP President Rev. E.D. Mondainé followed, telling the crowd, “It is time to rally our allies and quickly recruit them as accomplices that will stand with the disenfranchised and those who are marginalized in our cities across America in our fight for freedom.”

Kolodny told The Skanner that the event was part of The Spectacle, Portland Popular Mobilization’s counter-protest, which aimed to distract from White supremacist demonstrators.

“I went to an organizing meeting of Pop Mob, and I learned of their desire to create a counter presence that they called ‘The Spectacle’ that would be filled with song and dance and music and juggling and satire and humor, to create a unifying community experience that was joyful and connecting, and just counterbalancing,” Kolodny said.

In practice, The Spectacle encouraged a gathering of not just masked protestors often associated with the Antifa movement, but also colorfully dressed and costumed demonstrators.

“It was really overshadowing of the White nationalist movement,” Ward said. “Pop Mob has really engaged in a new set of tactics that were creative and celebratory, and I want to acknowledge that, and acknowledge that leadership.”

“They might come back,” Ward said in response to Proud Boys organizer Joe Biggs’ threat that his group would return for monthly rallies.

“Every dollar spent when they come back that continues to strengthen the unity of Portlanders, is a dollar well spent.

Ward added, “I’ve been in many a protest. I’ve been in some amazing community mobilizations against bigotry. I’ve not in my 30 years seen such an organic alignment, that was so celebratory, as Saturday. People felt empowered and not disempowered. And the fact that Joey Gibson and Joe Biggs are spending Monday working so hard to convince media and their followers that they were successful tells me how much they’re scrambling. They’ve never had to scramble to declare a win before. They ran out of gas in Portland. And I think it’s significant and I think other cities should take note of it.”