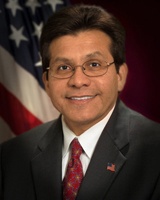 WASHINGTON--The chair of the Senate Judiciary Committee expressed skepticism Monday about the legality of President Bush's warrantless eavesdropping program and suggested it be reviewed by a special federal court.

Federal law "has a forceful and blanket prohibition against any electronic surveillance without a court order," said Sen. Arlen Specter, R-Pa., as he opened a hearing on National Security Agency eavesdropping within the United States.

While the president claims he has the authority to order such surveillance to protect Americans from terrorist attacks, Specter said, "I am skeptical of that interpretation." Monday's hearing into the NSA program got off to a rocky start when Democrats protested that Attorney General Alberto Gonzales should be given a sworn oath before testifying.

"It's not up to him," said Specter, who was upheld by a quick party-line vote by the GOP-led committee.

Gonzales, who was not sworn in, told the committee he would voluntarily take the oath if the committee so desired. Either way, "my answers would be the same whether I was under oath or not," he said.

Specter raised the possibility that a special court set up by the 1978 Foreign Intelligence Surveillance Act might have to review the wiretapping policy. Leahy, meanwhile, said that while al-Qaida terrorists should be monitored, Bush chose to illegally wiretap Americans' conversations without safeguards to protect civil liberties.

"My concern is for peaceful Quakers who are being spied upon, and other law-abiding Americans and babies and nuns who are placed on terrorist watch lists," Leahy said.