Far-Right and Antifa Groups Both Claim Victory at Portland 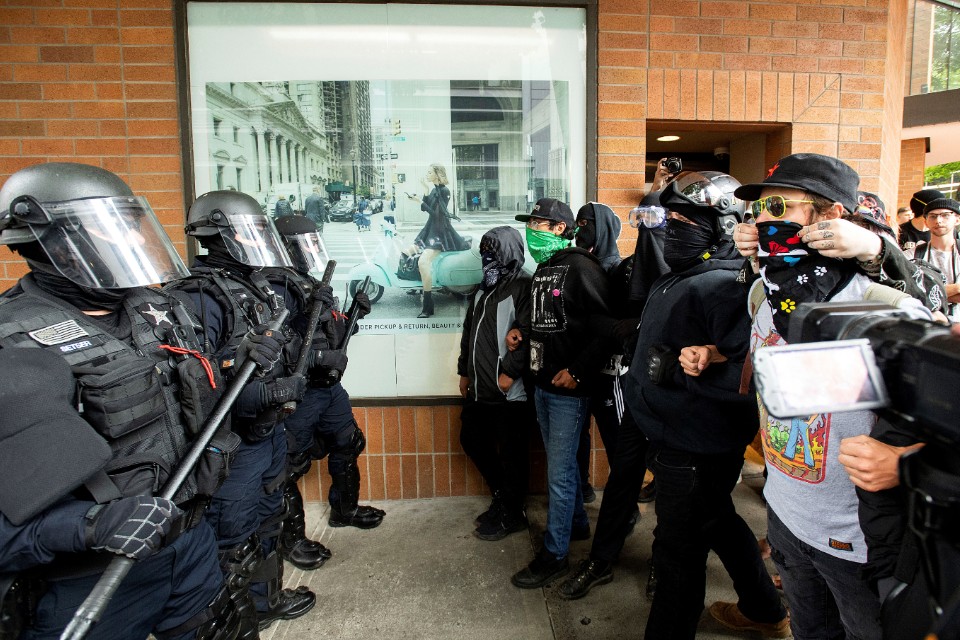 PORTLAND, Ore. (AP) — With both the left and the right declaring victory following a long-hyped rally that had Portland, Oregon, on edge it seems the liberal city will continue to be a flashpoint in an increasingly divided country.

City officials were mostly relieved that a downtown gathering Saturday of more than 1,000 far-right protesters and anti-fascist counter-demonstrators wasn't as violent as feared.

"I'm grateful this was largely a peaceful event," Mayor Ted Wheeler said. "We were preparing for and planning for a worst-case scenario."

There were 13 arrests and police seized bear spray, shields, poles and other weapons. But by using barriers and bridge closures — and allowing a large contingent of right-wingers to leave when they asked to — authorities were able to mostly keep the two sides apart. Six minor injuries were reported.

Joe Biggs, the organizer of the right-wing gathering that featured the Proud Boys, Patriot Prayer and other far-right groups, said they accomplished their goal of drawing attention to black-clad anti-fascist protesters — known as antifa —who showed up to meet them.

President Donald Trump tweeted early Saturday that "major consideration is being given to naming ANTIFA an 'ORGANIZATION of TERROR.'" It wasn't immediately clear what he meant by that because there's no mechanism for the United States government to declare a domestic organization a terror group.

Biggs told The Oregonian/OregonLive he was pleased the rally attracted Trump's attention.

"He talked about Portland, said he's watching antifa. That's all we wanted," he said.

Biggs said he and the right-wing groups would keep coming back to Portland so long as antifa was around.

But Eric K. Ward, executive director of the Portland-based Western States Center, said the right-wing rally was a bust.

In an interview, Ward said Biggs' groups cut short a planned five-hour rally after only one hour and left.

"The white nationalist, alt-right coalition that came to Portland were denied what they sought to create, which was large-scale civil disturbances," Ward said.

While antifa protesters get a lot of attention, Ward said there were many others who came out to oppose the right-wing groups. He also praised police and city officials for their actions.

"What I saw yesterday was the first step in Portland really putting together a citywide response," he said.

Wheeler, Portland's mayor, said at a Saturday evening news conference that Biggs and anyone espousing hate or violence was not welcome.

"We do not want him here in my city. Period," Wheeler said.

Wheeler tied the demonstrations to "a rising white nationalist movement" and a growing sense of fear in the country.

"Portland being a very progressive community is always going to be at or near ground zero of this battle."

Wheeler emphasized that there are hundreds of protests every year in Portland, and most don't get any attention.

More than two dozen local, state and federal law enforcement agencies, including the FBI, were in the city for the right-wing rally.

As of early afternoon, most of the right-wing groups had left the area. But hundreds of people remained downtown and on nearby streets, and there were tense skirmishes, mostly with antifa protesters who were trying to find right-wing rallyers, throughout the day.

Patriot Prayer's Gibson, who organized similar rallies in 2017 and 2018 that erupted in clashes, surrendered Friday on an arrest warrant for felony rioting. He was at a confrontation that broke out on May 1 outside a bar where antifa members had gathered after a May Day demonstration.

In a video he livestreamed on Facebook, Gibson accused the police of playing politics by arresting him but not the masked demonstrators who beat up conservative blogger Andy Ngo at a June 29 rally that drew national attention.

Gibson was also at Saturday's rally.

Ward said even if right-wing groups return to Portland he is confident in the community's ability to turn out and stay true to its values.

"The tables have really turned in a significant way," he said.