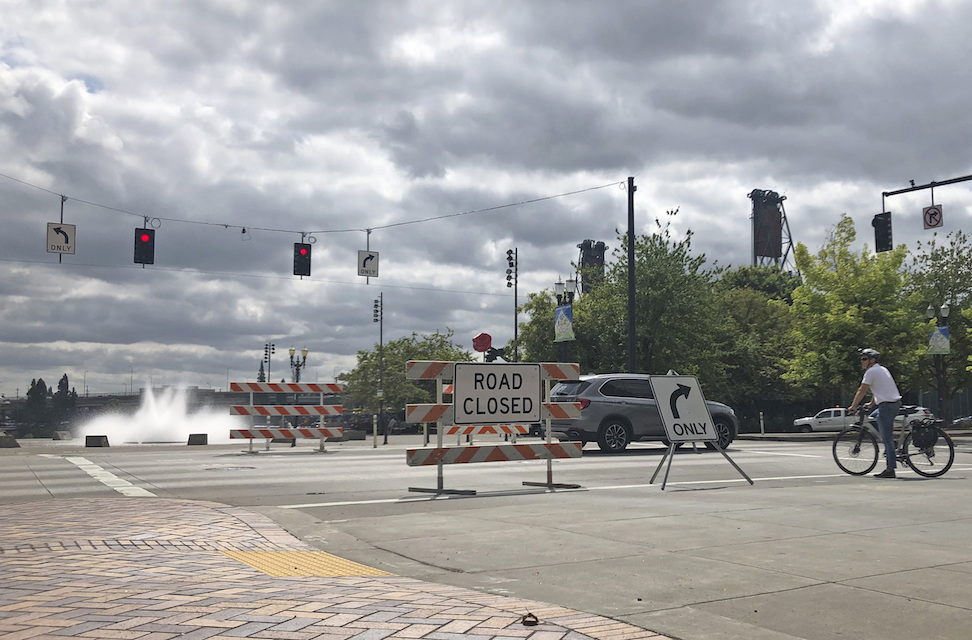 Portland, Ore. (AP) — Authorities arrested the leader of a right-wing group on the eve of a rally that's expected to draw people from around the U.S. to Portland, Oregon, on Saturday, prompting Patriot Prayer's Joey Gibson to urge his followers to "show up one hundred-fold" in response.

Self-described anti-fascists have vowed to confront the right-wing groups at the downtown rally and the arrests of Gibson and five other right-wing supporters appeared to be intended to send a signal from police to organizers to remain peaceful or stay away.

Gibson, who is not involved in this weekend's event but organized similar rallies in 2017 and 2018 that erupted in clashes, surrendered Friday on an arrest warrant for rioting.

He was at a confrontation that broke out on May 1 outside a bar where members of the so-called "antifa" movement had gathered after a May Day demonstration.

In a video he livestreamed on Facebook, Gibson accused the police of playing politics by arresting him and other right-wing members but not the masked demonstrators who beat up conservative blogger Andy Ngo at a June 29 rally.

"What I'm saying to everybody who's listening to this (is) they're trying to shut you guys up. They want you to not show up in Portland, they want to put fear in your hearts. When a government pushes back like that, we don't bend the knee," he said, as he walked to the jail.

"We show up ten-fold, one hundred-fold," he said.

"If you believe in freedom and you're against this political charging that they're doing, show up tomorrow but be peaceful. Force them to arrest you for being peaceful."

On Aug. 14 Mayor Ted Wheeler and a variety of community members held a press conference in anticipation of thefar-right rally. One of the speakers was Avel Gordly, a longtime community activist and the first African American woman elected to the Oregon Senate. Read former Sen. Avel Gordly's powerful statement

A Portland Police spokeswoman declined to comment about specific arrests but said generally police continue to investigate several incidents from clashes on May 1 and June 29 and are politically neutral.

Members of antifa often cover their faces with masks, making it harder to identify them.

"We receive criticism no matter what. It's either too much, not enough, you arrested this group and not this group," said police spokeswoman Tina Jones.

"It seems like some people are keeping score and that's not what it's about on the law enforcement side. One hundred percent, it's about public safety."

In addition to the Proud Boys, the white nationalist American Guard and the Three Percenters, a far-right militia, have all said they will have members in Portland.

The Oath Keepers, another far-right militia group, said in a statement late Thursday they were pulling out of the rally because organizers have not done enough to keep white supremacist groups away.

The group's founder, Stewart Rhodes, said while he agreed with the rally's goal of opposing antifascists, he was concerned about the violent rhetoric posted online that could cause legal problems for those who attend.

"It would be best for the patriot/conservative cause if this August 17 rally were simply canceled," he wrote.

"Those who want to protest the way Portland coddles Antifa should start over, with a clean slate."

More than two dozen different local, state and federal law enforcement agencies are expected, some at the rally and some in support roles, Jones said.

Authorities asked residents not to call 911 unless it's a life-threatening emergency and to stay away from the heart of downtown.

Some city streets were already closed Friday and a major bridge connecting the east and west sides of the city will close before dawn Saturday.