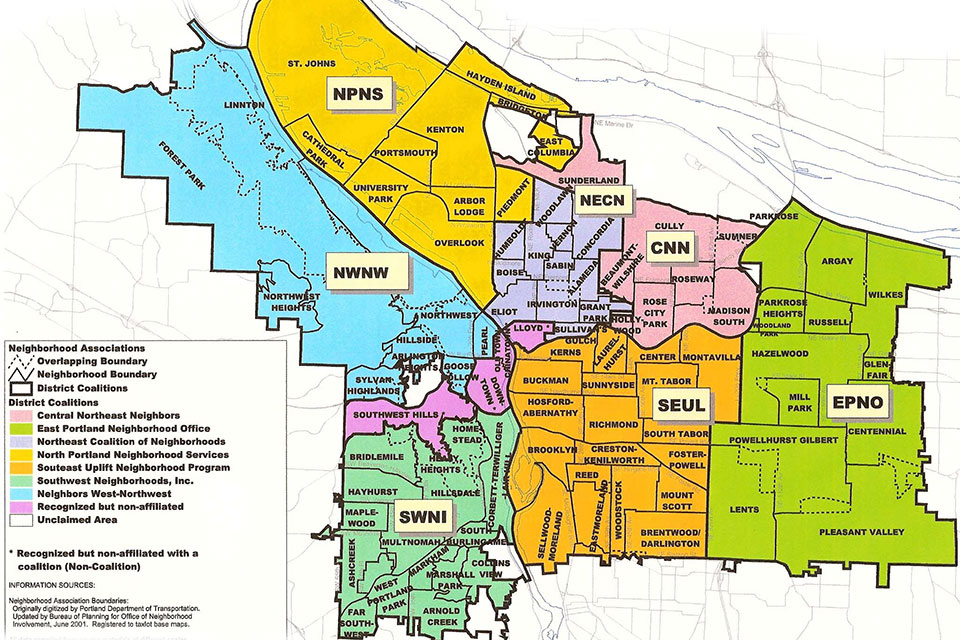 Portland is moving to de-emphasize the power of 95 formally recognized, volunteer-based neighborhood associations, in a move officials hope will give other organizations equal input in city affairs.

“Our functions are no longer represented in the code,” she said, adding that residents’ needs had evolved since the 1974 code that established the neighborhood association system. “We’re asking, Who do we need to include in addition to neighborhood associations? How do we broaden civic leadership and civic engagement in the city?”

But Routh said the code was not meant to undermine neighborhood associations.

“It’s the city’s role to find meaningful pathways to engagement,” Routh said, “and the neighborhood association is just one way to do that.”

“My desire, both as a resident and someone invested in the process, is to see more connection between coalitions, associations, and other organizations in our community,” Mariah Dula, Board Chair of the Northeast Coalition of Neighborhoods and member of the Alameda Neighborhood Association, told The Skanner.

“It’s the only geographic representation we have in Portland politically.

But city officials have pointed to what they see as low attendance numbers at neighborhood association meetings. Routh confirmed the Portland City Council directed the Office of Community and Civic Life to update the code in response to a 2016 audit by the Office of Neighborhood Involvement that found renters, low-income residents, and residents of color were underrepresented in neighborhood associations across the city.

“As far as the charge that neighborhood associations aren’t representative, it depends how you define participation,” Dula said.

“Is it only board members who show up monthly, or can you consider yourself a participant if you attend a cleanup and attend one or two activities a year?”

Supporters of the code change say that money would be better dispersed among other local organizations that represent marginalized communities.

“It is of note that, in contrast to the coalition budget line item, our budget for the same year invests only $151,000 for youth (programs), $211,000 for immigrant and refugees (support), and $914,000 in the diversity and civic leadership program,” Routh told The Skanner. “It is also of note that the contracts to neighborhood coalitions have been no-bid contracts for over 44 years.”

Other organizations welcome the proposed code.

“Typically, I would say neighborhood associations, in terms of representing diverse experiences and for membership from renters, haven’t been that great,” Katrina Holland, Executive Director of the Community Alliance of Tenants, told The Skanner. “Why should neighborhood associations have this specialized, set-aside type of power that’s different from other community organizations, or just regular run-of-the-mill citizens who show up?”

Holland acknowledged that her organization has received grant funding from neighborhood associations.

“Does that mean they should have separate power?” Holland said. “I don’t think so. If we’re going to have an inclusive city that represents diverse interests, we have to be real about the history that comes with neighborhood associations.

"Especially with regard to race and renters versus homeowners, the dynamic hasn’t necessarily been healthy.”

“If OCCL wants to be able to include other groups, and those groups feel neighborhood associations have more power than them, that can be mitigated by adding other groups to the code,” Jeka told The Skanner. “There’s the global village piece.”

Ginger Edwards, Chair of the Arbor Lodge Neighborhood Association, said her group was committed to outreach.

“For about two years (we) have been trying to reach out to the homeless population, sending out both social media and a printed invite to our meetings with a statement of solidarity,” Edwards said.

“We appeal to renters via social media, or to anyone working in Arbor Lodge but not living here. We've printed fliers in Spanish.”

But not all neighborhood association members are against the proposed changes.

“I think the intention here is not to take away from neighborhood associations, but to bring others into this way of engaging,” David Sweet, who formerly worked for the City of Portland Bureau of Buildings and is currently a member of the Cully Association of Neighbors, told The Skanner. “There is a definite fairness question there. We are using public funds to pay to support groups that exist, in some sense, to lobby for the interests of homeowners.”

Sweet pointed to his own neighborhood as an example.

“The Cully Association of Neighbors is one of seven place-based community associations working in Cully,” he said. “All seven associations are in agreement that one of our primary objectives is to prevent the displacement of low-income people and people of color in our neighborhood.

"Of those seven organizations, six of them are nonprofits that are doing stuff on the ground.

"They’re building affordable housing, they’re repairing existing housing for low-income homeowners, they offer job training, they’re employing people. We don’t have those resources in our neighborhood association. And yet, of the seven, we’re the one that is subsidized by the City of Portland.”

The Portland City Council is scheduled to review the recommended code changes during its Sept. 3 meeting.