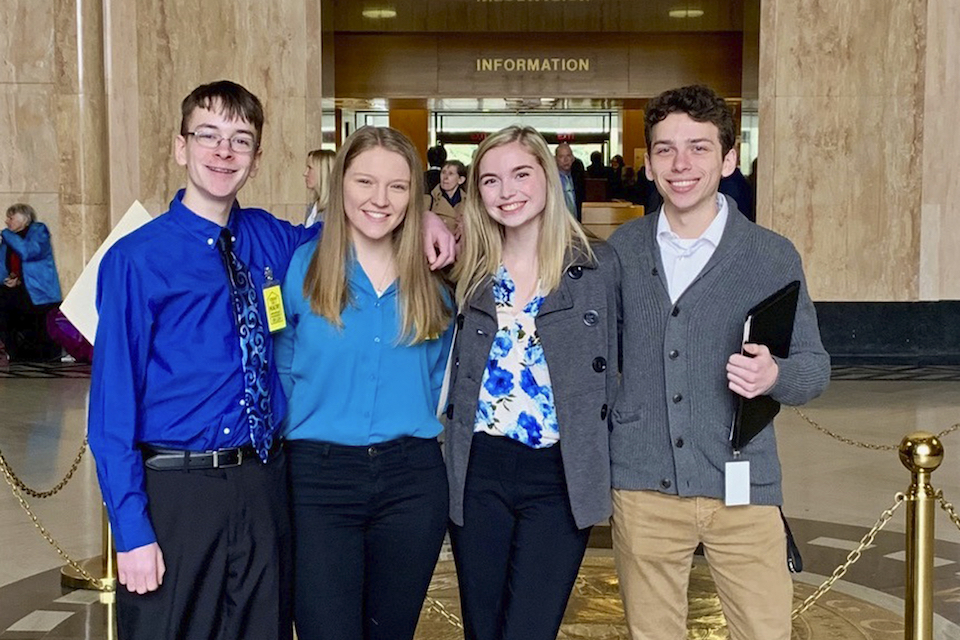 SALEM, Oregon (AP) — Oregon will allow students to take "mental health days" just as they would sick days, expanding the reasons for excused school absences to include mental or behavioral health under a new law that experts say is one of the first of its kind in the U.S.

But don't call it coddling. The students behind the measure say it's meant to change the stigma around mental health in a state that has some of the United States' highest suicide rates.

Mental health experts say it is one of the first state laws to explicitly instruct schools to treat mental health and physical health equally, and it comes at a time educators are increasingly considering the emotional health of students. Utah passed a similar law last year.

Oregon's bill, signed by Gov. Kate Brown last month, represents one of the few wins for youth activists from around the state who were unusually active at the Capitol this year.

Along with expanded mental health services, they lobbied for legislation to strengthen gun control and lower the voting age, both of which failed.

Haily Hardcastle, an 18-year-old from the Portland suburb of Sherwood who helped champion the mental health bill, said she and other student leaders were partly motivated by the national youth-led movement that followed last year's Parkland, Florida, school shooting.

"We were inspired by Parkland in the sense that it showed us that young people can totally change the political conversation," she said. "Just like those movements, this bill is something completely coming from the youth."

Hardcastle, who plans to attend the University of Oregon in the fall, said she and fellow youth leaders drafted the measure to respond to a mental health crisis in schools and to "encourage kids to admit when they're struggling."

First step is to reduce stigma

"The first step to confront this crisis is to reduce the stigma around it," Plotnik said. "We need to say it's just as OK to take care for mental health reasons as it is to care for a broken bone or a physical illness."

Suicide is Oregon's second leading cause of death among those ages 10 to 34, according to data from the state Health Authority. Nearly 17% of eighth-graders reported seriously contemplating taking their lives within the past 12 months.

Nearly 17% of eighth-graders reported seriously contemplating taking their lives within the past 12 months.

And it's not just an Oregon problem, although the state does have a suicide rate 40% higher than the national average. The national suicide rate has also been on the rise and recently hit a 50-year high, climbing more than 30% since 1999, according to the Centers for Disease Control and Prevention.

Previously, schools were obliged to excuse only absences related to physical illnesses.

At many schools, absences must be excused to make up missed tests or avoid detention.

Under state law, students can have up to five absences excused in a three month period. Anything more requires a written excuse to the principal.

Despite little public opposition from lawmakers, Hardcastle said she's received pushback from some parents who say the legislation wasn't necessary, as students can already take mental health days by lying or pretending to be sick.

Other opponents have said the law will encourage students to find more excuses to miss school in a state that also suffers from one of the worst absenteeism rates in the nation.

But those criticisms miss the point of the bill, said Hardcastle. Students are going to take the same amount of days off from school with or without the new law, but they might be less likely to lie about why they're taking take a day off if schools formally recognize mental health in their attendance policies.

"Why should we encourage lying to our parents and teachers?" she said.

"Being open to adults about our mental health promotes positive dialogue that could help kids get the help they need."

Parents Roxanne and Jason Wilson agree, and say the law might have helped save their 14-year-old daughter, Chloe, who took her life in February 2018.

The Eugene-based couple said the funny and bubbly teen had dreams of becoming a surgeon but faced bullying after coming out as bisexual in middle school.

When things at school were particularly rough, Chloe would pretend to be sick to stay home.

"Because she lied to get her absences excused, we didn't get to have those mental health conversations that could have saved her life," said Roxanne, who now manages a local suicide prevention program.

Chloe was one of five teens to die by suicide in the Eugene area that month. Roxanne and Jason, who moved to the rural city of Dayton following their daughter's death, worry that those against the bill underestimate the hardships today's teens face.

"Calling kids coddled or sensitive will just further discourage them from being honest with adults about what they're going through," Jason Wilson said. "We need to do everything we can to open up that dialogue between parents and children when it comes to mental health."