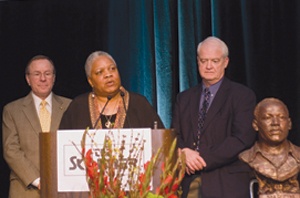 Oregon State Sen. Avel Gordly, after receiving The Skanner Foundation's Drum Major for Justice Award, talked to the crowd of over 1,000 about the importance of community-based mental health centers. She called upon Oregon Gov. Ted Kulongoski (left) and Senate President (right) Peter Courtney to act to protect patients at the Oregon State Hospital.

During The Skanner's 22nd annual Martin Luther King Jr. Breakfast, Oregon Rep. Earl Blumenauer said being stewards to our environment was one of King's many concerns.
"(The idea that) we're all in this alone …," Blumenauer told an audience of over 1,000 at the Hilton Hotel in Downtown Portland. "It's not going to work that way anymore."
Blumenauer was one of several elected officials speaking at the celebration, including Sen. Gordon Smith, R-Ore., Portland Mayor Tom Potter, and Oregon Gov. Ted Kulongoski.
"One wonders what Dr. King would think that two top candidates from our team are an African American and a woman," said Blumenauer. "Would he be a little disappointed it took 40 years to get to this point?"
Smith, a Republican, also made mention of the historic nature of the Democratic presidential race; Kulongoski said every child in Oregon, in order to share in the American Dream, needed a quality education; Potter, who spent the last week at Jefferson High School, said the students there want to be part of the solution.
"Are you part of the problem or part of the solution," asked Potter to the diverse audience of hundreds of movers and shakers from both the private and public sectors of Portland's leadership.
Leading the invocation for the event was Rev. Vernetta Ollison, pastor of Shiloh Ministries, and singing "Lift Ev'ryVoice," the Black National Anthem, was The Jackson Sistas. And breakfast attendees also brought in about 1200 pounds of food to donate to the Oregon Food Bank.
Oregon state Sen. Avel Gordly was awarded The Skanner Foundation's Drum Major for Justice Award for her dedicated service to the people of Oregon during her tenure in the Legislature. Gordly will be retiring at the end of the year.
Receiving the award, Gordly thanked the mayor for his advocacy at Jefferson and spoke about the urgent need for reform regarding the mental illness health system in Oregon. She pointed to a recent study of Oregon State Hospital that found serious deficiencies in care standards, calling the problems,  "human rights violations."
"We know we have much to do in our state to correct the injustices at the Oregon State Hospital," Sen. Gordly said. "We must ensure patients in Oregon State Hospital get out of those conditions as soon as possible. We must recognize that conditions (at the hospital) represent a human rights challenge."
Overrepresented in the mental health system, African Americans will benefit from community-based services, Gordly said. A new mental health center offering culturally specific care for African Americans will open Feb. 28, downtown at 621 S.W. Alder St. It will be called the Avel Gordly Center for Healing.
This year's winners of the Rev. John Jackson Award were Ken Berry and Michael Chappie Grice of the World Arts Foundation, Inc. The foundation works to promote and preserve African American contributions to culture, and to promote community arts development. They are also the producers of the King tribute "Keep Living the Dream."

ENVIRONMENTALISM AND PARKS
Every year, The Skanner's Martin Luther King Breakfast looks at an issue related to Dr. Martin Luther King's struggle for civil rights, equality and justice in America. In years past The Skanner's publisher, Bernie Foster, has chosen to address the problems of diversity in the workplace, disaster preparedness, health care disparities, and tobacco prevention. This year, for the 22nd annual breakfast, he chose the theme: In Green Pastures: An Environment Where King's Dream Will Grow.
By focusing on the issue of environmental justice, Foster wanted to highlight opportunities for African Americans and all people to build a green economy, improve our urban environment for future generations, and generate "clean, green jobs" for urban youth.
On the advice of Mike Houck, the award-winning executive director of the Urban Greenspaces Institute at Portland State University, Foster contacted keynote speaker Stephen Coleman, executive director of Washington Parks and People, a multicultural Washington, D.C.-based organization that has helped to clean up some of the most dangerous and polluted parks in our nation's capital. 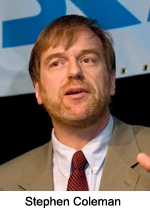 Eighteen years ago, Coleman helped create a citizens crime patrol for one of D.C.'s most crime-ridden parks after a boy was gunned down on Martin Luther King's birthday. Until that point, he said, the general rule of thumb in Washington — then the nation's murder capital — was "don't go out at night, don't talk to strangers, lock your doors and don't go to Malcolm X Park."
The park was considered so dangerous, in fact, they found few people to talk to on their first patrol – a patrol whose mission it was to talk to every person they encountered.
Eventually they encountered two men – a pastor and a homeless man. The pastor came to the park every day to meditate. The homeless man remembered the park when it had been "the most beautiful place in the world." There in the shadows of the riots following the death of Martin Luther King Jr. were two men who had seen the park when it was more than a dumping ground for human waste, used hypodermic needles and the lost hopes of society. Through much effort that included a community-based, multicultural organizing, Coleman's group was able to reduce crime in Malcolm X (or Meridian Hill) Park by 99 percent.
Co-led by Josephine Butler, an African American descendant of enslaved people, who Coleman calls his mentor, the group continued its work to improve the environment for DC's poorest residents. Armed with nothing but the revolutionary idea that everyone deserves quality green space in their neighborhoods, the group turned its attention to the Watts Branch Park, a park named after a slave-holding family. The park was neglected and polluted with untreated sewage waste, tens of thousands of used heroin needles, and trash. Drug dealers and addicts had taken over the park, while children were being run over by cars as they tried to play in nearby streets. Coleman said he complained so much to the Environmental Crimes Unit that instead of cleaning up the park, they arrested him for opening his mouth about the problems.
It turned out that the park was next to Marvin Gaye's former home – a building torn down during this period – and near the site where the late singer first performed. Coleman said many saw the destruction of Gaye's former home as a destruction of the community's heritage.
In an effort to reclaim the park, a group of African American children decided to put a farmer's market in the place of one of the largest open-air heroin markets in the United States. With the backing of Coleman and Butler's group, they gathered 2,000 signatures supporting the farmer's market.
"If we can have a market selling illegal and unhealthy things (why can't we have one selling locally grown food?)," said Coleman.
Then the group established the Marvin Gaye Amphitheater and turned toward revitalizing the park, which was rededicated as Marvin Gaye Park. Now, through federal grant money and the assistance from many organizations, the park is once again becoming a green space for the entire community.
Portland's own Charles Jordan, one of Coleman's environmental heroes and a longtime friend, played a hand in the park's revitalization.
Coleman said a clean environment in our cities is essential for a healthy community.
"Parks and greenery for all is the new bus and lunch counter fight (of our time)," he said.