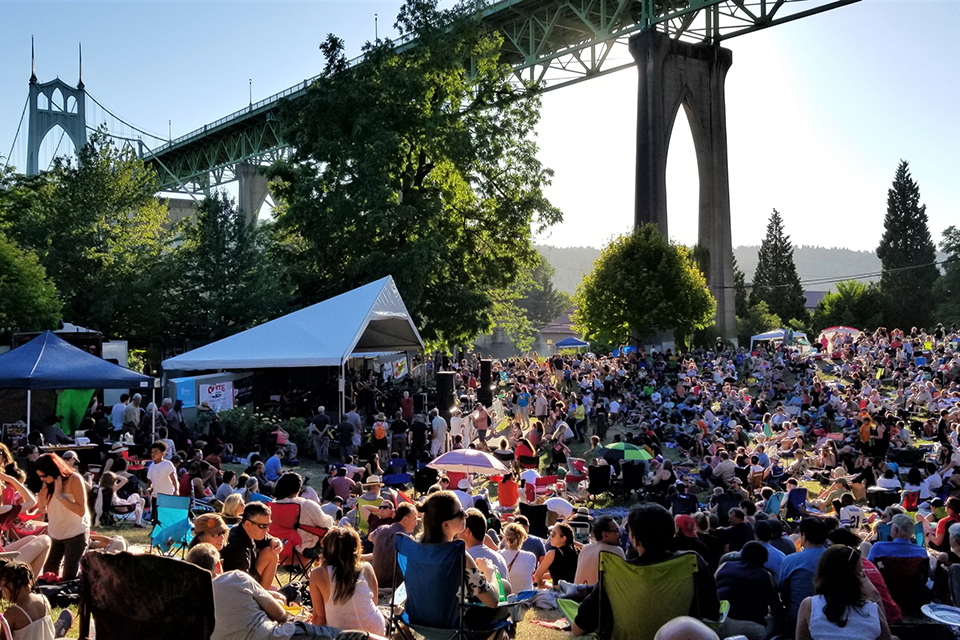 The Cathedral Park Jazz Festival started as a funeral, and in the decades since its inception, organizers have sometimes struggled to keep the festival itself alive. It turns 39 this weekend, though, with a varied lineup programmers hope will keep it young.

The free festival started in 1980 following years of advocacy by local carpenter and Howard Galbraith, who worked for years to clean up the waterfront in St. Johns and advocated for the city to build a park there. Galbraith died in 1980, shortly after Cathedral Park was completed. Galbraith, who also owned a jazz club called The Hobbit, told his family not to hold a funeral, but instead to throw a party in the park.

“It’s like the family picnic that everybody wants to go to,” said Rita Rega, one of the festival’s programming directors. “The bonus here is you’ve got some incredible live music.”

The event kicks off Friday night with R & B and funk artists Tyrone Hendrix and Farnell Newton, as well as blues singer Karen Lovely. Both Saturday and Sunday will kick off with local big bands; this year, the Metropolitan Youth Symphony’s jazz band will play at 1 p.m. Saturday afternoon and the adult, community big band the No Po Big Band will play at the same time Sunday. Saturday night ends with the Cuban jazz group Dina y los Rumberos; other artists on the bill include the Mel Brown Trio, the Devin Philips Quintet and the King Louis Organ Trio.

“We like to present all kinds of styles related to jazz and blues,” Rega said.

The Mel Brown Trio will also present a tribute to Leroy Vinnegar, one of the most widely recorded bassists in jazz, who started his career in Los Angeles but moved to Portland in 1986 and lived here until his death in 1999.

“I personally had a really close connection with Leroy, also being a bass player, and he was kind of a mentor to me,” said Dan Presley, a jazz bassist who had played at the festival several times before stepping into an organizing role three years ago. “We’re trying to encourage appreciation for the roots in this music that went way back before I was a performer. At the same time we’re also trying to encourage some of the younger musicians.”

Presley also serves as vice president of the Jazz Society of Oregon, a nonprofit organization that has organized the festival since 2014. Two years prior, the Oregon Department of Justice had forced the event’s previous fiscal sponsor to disband after complaints of mismanagement, including a failure to renew its nonprofit status paperwork and evidence that a prior organizer had appropriated funds for personal use.

Now, Rega said, the festival is organized by a small core of volunteers, including Presley and herself, who put the event together with the help of sponsors, who will also be giving away $2,000 worth of scholarships allowing young local musicians to attend music camps this summer.

In the past, organizers were able to draw on Galbraith’s reputation to bring in nationally known acts. In the last few years organizers have shifted the emphasis to Portland’s local scene. Rega said that hasn’t kept crowds away.

Since the event is free and audience members can come and go throughout the day, it’s hard to estimate attendance, but Rega said the general perception among organizers and performers is that the festival has grown in the last few years.

“We are getting better at social media and the word is out,” Rega said. “I think the programming is another factor that brings people in.”

“I just want to see it connected to the community, particularly in North Portland,” Presley said. “When I was coming up [as a musician] there were clubs like Geneva’s and the Brown Derby. I want to make sure the festival keeps a strong community connection. I think that’s really important.”