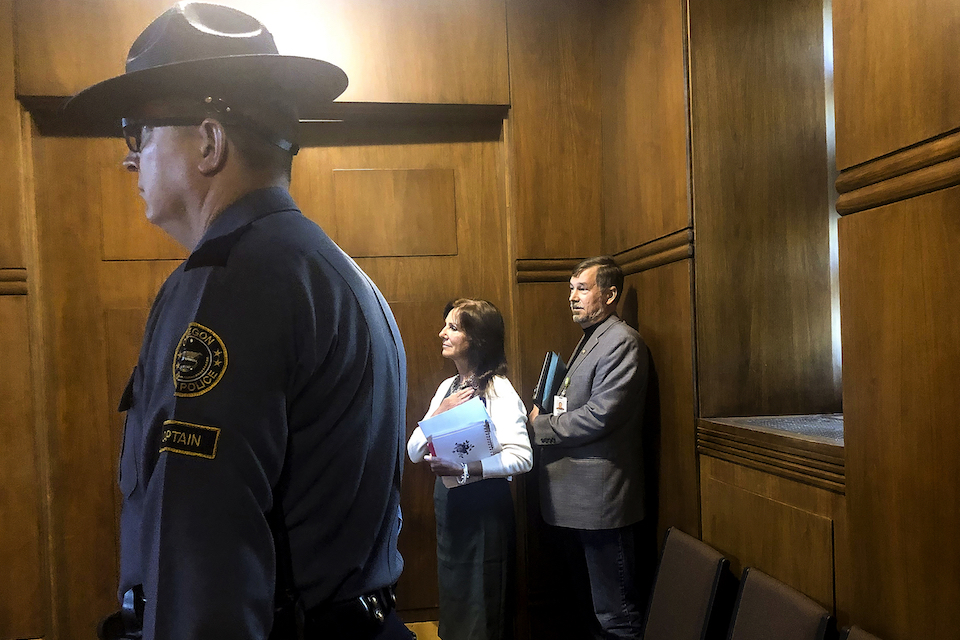 SALEM, Ore. (AP) — The Oregon Legislature wrapped up what has been a whirlwind of a session Sunday, with Democrats ultimately delivering some of their biggest legislative priorities to the governor's desk hours before a midnight deadline.

Senate Majority Leader Ginny Burdick called it an incredibly "productive session," saying lawmakers were able to approve what had long been considered "holy grail items" for Democrats. But it wasn't without controversy.

The Senate got off to a rocky start Sunday morning and was delayed for over three hours after a faction of Democrats insisted that Republican Sen. Brian Boquist be barred from the chamber.

Boquist drew criticism earlier this month after saying state police should "send bachelors and come heavily armed" if they try to return him to the Capitol during the walkout.

Despite some Democrats' protests, Boquist remained on the floor Sunday morning but left the Capitol building in the afternoon.

With him out of the way, the Senate quickly got back on track and moved through dozens of bills before adjourning for the year.

Here's a look at what was sent to the governor's desk.

Although a fuller picture of the budget won't be available until July, lawmakers approved significant funding increases to address higher education, foster care and public safety.

Higher education will see a $100 million increase, allowing some of the state's public universities to keep tuition increases below 5%. And for the first time in decades, the Oregon State Police will receive extra funding to hire dozens of state troopers. State troopers operate on shoestring budgets, and decades of cuts have left Oregon with only 380 troopers to patrol more than 6,400 miles of highways.

Oregon will become the eighth state in the nation to offer paid family and medical leave after the Senate voted to send the governor one of the most generous paid-leave proposals in the nation.

The plan offers all workers who make more than $1,000 a year 12 weeks paid leave for family or medical reasons.

It is the first paid leave plan in the country to offer low-income workers 100% wage replacement.

Businesses and employees will be required to contribute to help fund the program starting in 2022. Small businesses are exempted from contributing.

Workers will start seeing benefits in 2023.

Senators approved a controversial measure to clean up diesel emissions from medium- and heavy-duty trucks in the state's most urban areas.

It requires diesel trucks and buses in the state's three most populated counties to phase out older vehicle engines.

Newer models release fewer emissions into the air, and heavy-duty trucks titled in these counties must be model year 2007 or newer by 2025.

The bill faced resistance among rural communities. Loggers and truckers protested at the Capitol last week expressing concerns that the proposal would put them out of business.

The Senate approved a pioneering bill overhauling local zoning codes to allow for the production of less expensive housing options like duplexes, triplexes and townhomes. The measure lifts local bans on these denser housing options, paving the way for possible future development. The city of Minneapolis approved a similar measure last year.

Oregon voters will decide next year whether the state should increase its tobacco tax, after the Senate moved to send the question to the ballot.

It would increase the cigarette tax by $2 a pack and impose the state's first tax on e-cigarettes and other vaping products.

The move is central to the governor's plan to bridge a shortfall in the state's Medicaid program, which faces a $346 million hole next biennium because of decreases in federal funding.

The bill also specifies that money raised could be spent on mental health care. Oregon has some of the highest suicide rates in the country.

The cigarette tax would be raised from $1.33 per pack to $3.33. E-cigarettes and cigars will be taxed at 65% of wholesale price.

Oregon will set aside nearly $1.7 million to pay for prepaid postage on mail-in ballots.

Gov. Kate Brown made prepaid postage a priority this year, saying the move would increase voter turnout and reduce barriers to access.

Oregon switched to a vote-by-mail system in 2000.

The state will begin paying postage costs in time for next year's general election. Opponents say the move won't noticeably increase voter turnout and that the money could be better used elsewhere.Washington state and California also covers postage costs for mail-in ballots.