Week at Jefferson Was Potter's Best 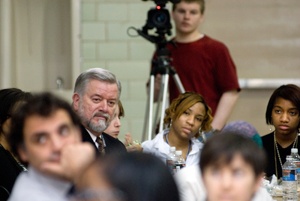 The Oregonian called it a symbol, but Sen. Avel Gordly said it was much more than that: "This is how beloved community behaves," she told the audience at The Skanner's Martin Luther King Jr. Breakfast, last Monday. What were they talking about: Mayor Tom Potter's decision to move his office to Jefferson High School for a week. It was a week he called the best week in his administration.
As Portland's bigwigs descended on the school before the mayor's State of the City Address Friday, students between classes were laughing, socializing and trying to figure out if their teachers were allowing them to attend the City Club meeting.
Senior Cynthia Hernandez, who wants to study law enforcement so she can work for the FBI some day, was handing out information about the school to visitors. She told The Skanner she was waiting to see if the mayor's presence would have lasting benefits for the school. "Having the community more involved with the Jefferson community would really help the school," she said. But she wasn't sure if the parents, business leaders and local residents who came last week, would stick around.
Yurico Solis, a junior, agreed. "More than anything I think it's brought awareness to what Jefferson needs," Solis said. "We need support from the community, from parents, from everyone."
What Potter found at Jefferson, he said, were positive attitudes and an unflinching commitment to the school. If the bad publicity Jefferson has endured hurt students' feelings and rocked their confidence, these young citizens are too proud to let it show.
Senior Sean Davis said he thought Potter found out what he and his classmates know – that negative media accounts of Jefferson don't truly reflect the students who attend Portland's oldest high school.
"I thought it was cool for them to see how Jefferson runs," he said.
Throughout the week, many workers from City Hall took the time to visit classrooms and talk to students about the various roles they all play.
"(My students) got to see city government at work," said Bernadice Cray, a special education instructor. "They got to see that they're actually people. That's important."
Cray's class had seven city hall visitors this past week, talking about everything from housing and jobs to transportation systems.
Being surrounded by youthful energy may have given City Hall staffers a lift. Science and Technology Academy Administrator Macarre Traynham said the mayor's staff seemed refreshed and revitalized after the visit. And according to the mayor, his staff wasn't happy to be leaving Jefferson.
"It's funny to see their excitement in a school setting," Traynham said. "(Their visit) is just opening the doors (to improvement)."
Traynham said she thought the staff were leaving with a changed perception of how Jefferson operates. She said students have gained a new sense of ownership of City Hall.
"It was a really wonderful opportunity to see how the mayor's office functions," she said. "One that will not be forgotten."
For some other students who are actively engaged in their student government, Potter's visit was a lesson in power politics.
Student Body President Tyrone White told the mayor Jefferson excelled because of its small class sizes, but suffered because of an understaffed college center. And Robert Gill, sophomore vice president, was one of a small group of students who had the opportunity to sit down with the mayor in a "10 Minutes with Tom" listening session. Gill told Potter Jefferson needed more classes, more community support and less negative coverage from the media. That's at least one area the mayor has very little, if any, control over. Yet Gill said the session was useful.
"If you voice your opinion loudly enough and keep trying your best, things can happen," he said. "I felt he was really listening to me."

State of the City
Potter's final act at Jefferson was giving his annual State of the City Address to the City Club of Portland at the high school. The mayor was almost upstaged by Lane Williams, a sixth grade student attending the Tubman Academy for Young Women. Williams received rapturous applause after her speech explaining why students need more help to cross busy streets and get to school safely.
In his address, Potter said the city has an opportunity this year to elect a diverse city council that would better reflect the city's multicultural identity.
He called on members of the community to volunteer as mentors for the hundreds of students who are falling behind academically.
"If we are each taking responsibility for the successes in and out of the classrooms (our schools can thrive)," he said.
Addressing the city's condition, the mayor said Portland's business climate is more welcoming than ever with more than 14 million people passing through PDX Airport this year.  Crime continues to fall to historic lows. In the downtown core crime has dropped 27 percent in the last two years.
Environmentally, Potter said, the city is leading the nation. Greenhouse gas emissions have been reduced by 14 percent per person; Portland has the highest number of LEED-certified buildings in the country; and fossil fuel use has been reduced by 50 percent.
"Success will not be measured by the size of our McMansions, but by the size of our carbon footprint," he said.
The mayor emerged as a champion for all minority communities. The 14th amendment means protection for everyone, he reminded the audience, yet a "twilight zone of bigotry" surrounds issues affecting gay, lesbian, bisexual and transgendered people. Potter pointed to the delays that continue to hold up Oregon's domestic partnership legislation.
Race remains an impediment to success for many people in the city, he told the audience. That's why, he explained, Portland needs projects like the day labor center and the proposed new Human Relations Commission.
"Race remains an ugly open sore on the body politic," he said. "Until we start talking openly, it will remain that way."