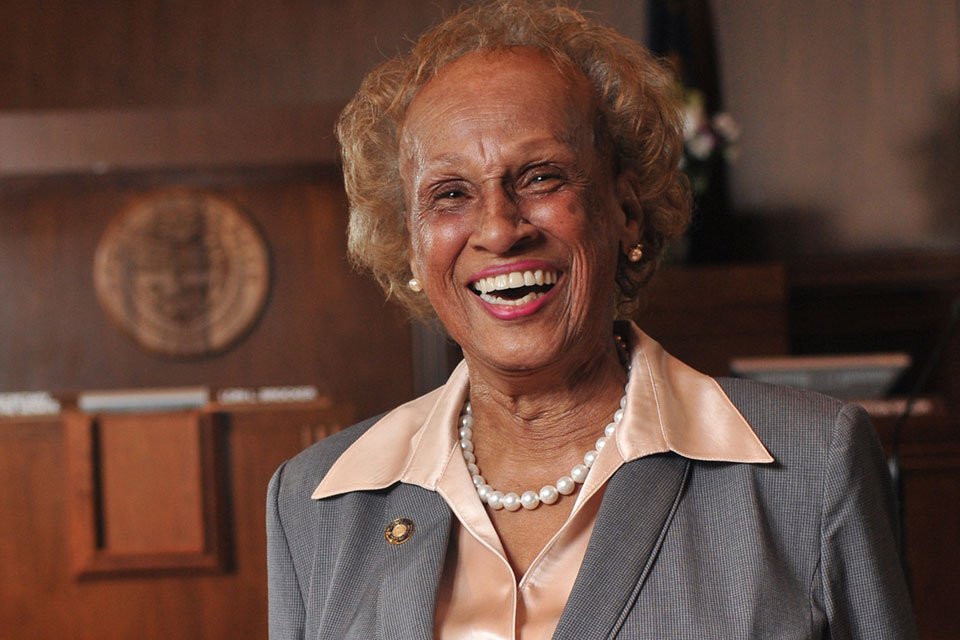 Longtime Oregon state legislator Sen. Jackie Winters (R-Salem), the first African American Republican to be elected to the state Legislature, died May 29 after a lengthy battle with cancer. She was 82.

House Speaker Tina Kotek announced Winters' death from the House floor, where the news was met with an outpouring of grief from both sides of the aisle. Colleagues remembered Winters as a force of nature, and described her tenure in Salem as one marked by passion.

“She was a pioneering woman in the Oregon Legislature, a true historical figure,” Courtney said in a statement. “I’ve lost my partner in public service. The Legislature and Oregon has lost a dedicated servant.

"We’ve lost the best of the best.”

Winters was re-elected to the Senate in 2018, and though her declining health kept her from the capitol for the last couple months, she had seen her work for juvenile justice reform culminate in the passage of Senate Bill 1008, which would substantially reform Oregon’s juvenile justice system and mitigate mandatory minimum sentences for youth, a week prior to her death.

Winters was widowed in 2008. In remarks submitted to a public hearing for SB 1008 last April, she recalled her personal connection to the bill.

“My late husband, Ted Winters, was sent to an adult prison when he was 17 years old,” Winters wrote in a statement. “He was deemed beyond redemption by a tough judge. I know if Ted were here today he would be the first to tell you that adult prison hardened him and taught him how to be a better criminal, not a better person...He is proof of how youth can and do change. The most important lesson Ted taught me -- taught all of us -- is that redemption is possible with a second chance.”

After the passage of SB 1008, Winters had thanked Rep. Jennifer Williamson for being a central force behind the bill.

"I am heartbroken,” Williamson said in response to Winters’ death. "I was not only fortunate to call her a friend, but fortunate to have her as a partner in the charge for a more just criminal justice system. I am not quite sure what we will do without her.”

Born in Topeka, Kan., Winters attended Portland Public Schools and Oregon State University. According to her official legislative biography, she began her career in government in 1959 in the Oregon Health Sciences University medical records unit, then worked for the Portland Model Cities Program. In 1979 Gov. Victor Atiyeh appointed her ombudsman of the Office of Economic Opportunity’s New Resources Program, where she was a driving force in the creation of the Oregon Food Share Program. She opened Jackie's Ribs in Portland, which would become a small chain of restaurants in the Salem area, in 1985. It was as a businesswoman that she successfully ran for the Oregon House of Representatives in 1998, and then for the state Senate in 2010.

“Oregon would not be the state it is today without her incredible dedication to the causes and people she fiercely believed in,” Baertschiger said in a statement, adding that Winters “leaves a legacy for all Republicans.”

Former Oregon senator Avel Gordly served alongside Winters in the Senate for seven years, a time when she said both had the honor of working with Sen. Margaret Carter (D-Portland) -- the first African American woman elected to the Oregon Legislative Assembly.

“It was a remarkable period of time that we shared,” Gordly said, “and we had the assignment of serving together on the Joint Ways and Means Committee. So there was the optics in that people would come into the hearing room and see these three Black women in powerful roles on the committee. Jackie kept saying to us at the time that it was a remarkable moment in Oregon’s history, the fact that we were all there and we were representing districts that were predominantly White in terms of demographics. And she felt and we felt that not enough attention was being paid to the fact that we had made that history.”

Gordly characterized Winters as more of a public servant than a politician -- one whose service in the Legislature was marked by both kindness as greatness.

“It was in her regard for and the way that she valued relationships, she loved people,” Gordley said. “She was greatness, in the way in which she mastered public policy-making. Her approach was to be the correcting influence as a public policy maker. She focused always on whether the policy was right, on whether it was just, and whether it was fair. And that was her guide.”

Gordly described Winters’ grace toward her colleagues and constituents as bipartisan.

“The nurturing aspect of her character (meant) that she had concern for the welfare and well-being of all of her colleagues,” Gordly said.

“The party stuff didn’t matter. She saw you. She was someone who had her arms to embrace around everyone.

"When she was in the room, you knew it. Whether she was speaking or not. Her presence dictated behavior.”

“It didn’t matter to her that most of the members of Black Caucus were Democrats,” Carter said. “She would get in there and hold her ground. She never hid the fact that she was a Republican. Never, ever. She did not compromise her position.”

Carter, who enjoyed a more than 30-year friendship with Winters, added that party lines never caused a rift between them personally, despite the occasional conflict on the floor. The two still celebrated the occasional holiday together up until Winters’ death, and Carter said she wanted to see Winters get more recognition for her family life, in addition to her legislative legacy. Winters is survived by four sons, a stepson, a stepdaughter, 11 grandchildren, and two great-grandchildren.

“She was a stalwart, and her sons understood her very much in terms of their love for her, their obedience,” Carter said, “and it showed in how they made a way for themselves in this world. They married successful women, have successful families. (Winters) did not skip a beat. She had three businesses -- the woman was just truly an amazing Oregonian.”

Carter said Winters’ ability to inspire confidence from those who knew her translated easily in Salem.

“She always held a committee chair, even as a minority, because she was so trusted by the leadership of the Legislature,” Carter said.

“I think probably the other person who loves the institution as much as Jackie is Peter Courtney,” Gordly said, “and the two of them worked together so well over the years because they shared that love of the institution. And it was more than the institution because they understood it was made up of people. The way they were able to work together was they were Salemites and shared values, family, and all of that. What they modeled was extraordinary.”

A memorial service honoring Sen. Jackie Winters will take place at the Oregon State Capitol on Thursday, June 13 at 1 p.m. in the Senate Chambers, with reception to follow. The public is invited to attend.

Cards and remembrances for Senator Winters’ family should be sent to the Office of Senator Jackie Winters located at 900 Court Street NE, S-301, Salem, OR.