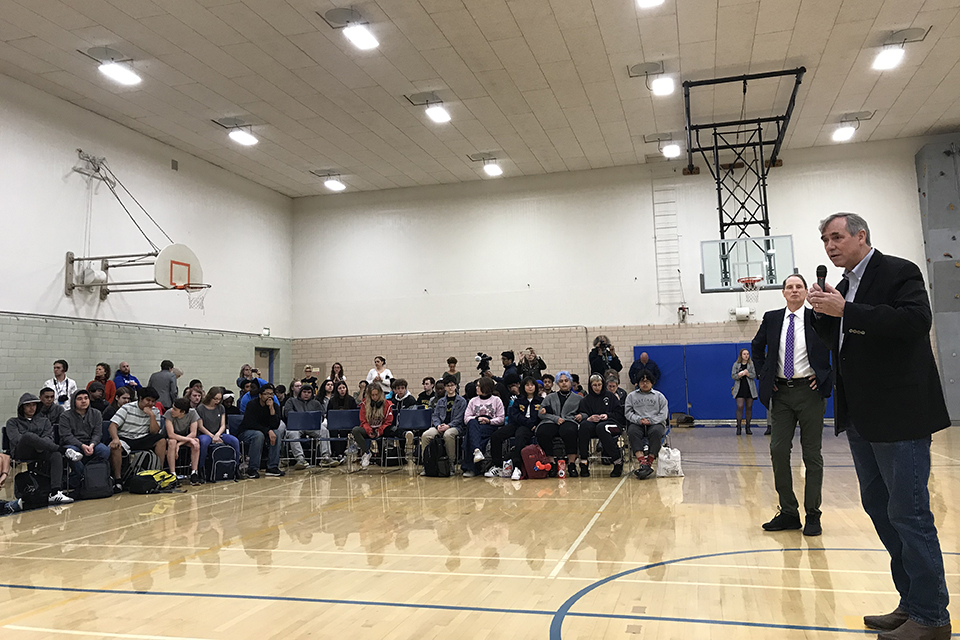 By Christen McCurdy | The Skanner News
Published: 30 May 2019

As Oregon’s senators introduced themselves at a Friday-morning town hall at Jefferson High School, they listed issues they could touch on during the question-and-answer. Sen. Ron Wyden talked about Trail Blazers center and Turkish political dissident Enes Kanter, as well as college costs and jobs, and Sen. Jeff Merkley echoed concerns about spiraling college costs as well as climate change and threats to democracy.

But they also asked students to tell them what they should know.

“This is your time and your time to educate us,” Wyden said.

Students asked what the senators intended to do about climate change, gun violence and immigration. Two students brought up gentrification – which is an urgent and highly visible issue in North Portland, where Jefferson High School is situated, and in the neighborhoods where many Jefferson students live. It’s also often discussed in terms of specific cities and neighborhoods – not as something under federal purview.

“The typical family, as you know, can’t afford to buy a home close by. They can’t afford to rent a home close by,” Wyden said in response to a question about how to keep communities livable and affordable for minorities and low-income people. He said in his role on the finance committee he intended to find more funding for affordable housing near amenities like public transit and grocery stores.

“Good on you for asking about an issue that’s so important in this community and so many communities around Oregon,” Wyden said.

“We really need to subsidize homeownership,” Merkley said. He said that in the early 1990s – when he was the executive director of Habitat for Humanity Portland – he and some coalition partners brought forward a project called Project Down Payment to Portland’s City Council but at that time, “We couldn’t get the city council to pay attention.” He said the federal government needs to fund more assistance for low-income homebuyers.

Another student said Jefferson High School is crumbling and that repairs at the school were “an afterthought” until demographics in the neighborhood and school began to change.

“What can we do to improve infrastructure without furthering gentrification?” she asked, drawing a round of applause from students.

Merkley said schools should be included in the National Infrastructure Bill to ensure structural improvements are funded equitably. Wyden talked briefly about President Trump’s abrupt departure from a meeting on infrastructure that week, for which Wyden himself was present; he said big multinational corporations need to pay more taxes to fund public works projects.

“It starts with recognizing how much power students have,” Wyden said. “Political change is very rarely top down. It’s almost always bottom up.”

He said as a new Senator in 1996, he was asked about marriage equality and his answer was simply, “If you don’t want a gay marriage, don’t get one.” The fight around marriage equality changed rapidly over the next few years, he said. The Supreme Court ruled in favor of the constitutionality of same-sex marriage in 2015 after years of legislative and court battles that began not with political institutions but with activists.

Another student mentioned a recent incident at Parkrose High School where a coach and former University of Oregon football star tackled an armed student as he entered the school, seizing his gun and holding the student until police arrived. The student asked when the government would pass “sensible gun laws” to protect the public.

“We think it’s not right to leave all of you as just a lockdown generation,” Wyden said. He said he and Merkley are pushing for better background checks before purchasing guns, as well as increased funding for mental health services. “This is going to be another one where young people make the difference.”