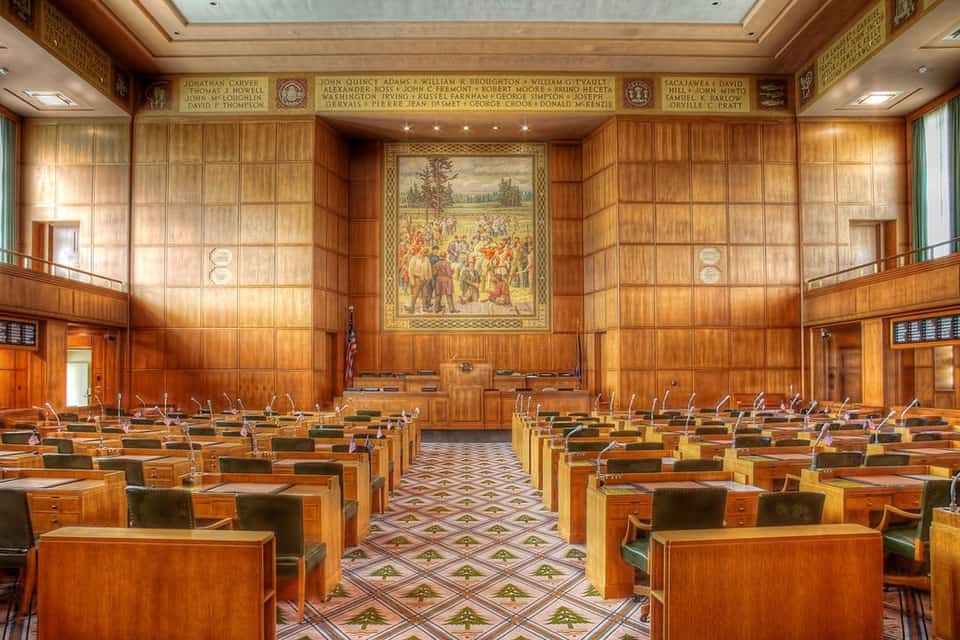 The Oregon House of Representatives passed substantial juvenile justice system reforms during an evening session May 23, voting 40-18 to mitigate a process of mandatory minimum sentences for minors.

The omnibus bill reforms some aspects of Measure 11, which imposed mandatory minimum sentences for several crimes, and also requires that youth aged 15 and older, when charged with certain crimes, be tried as adults. Oregon voters passed Measure 11 in 1994, and because it was created by a voter referendum, it needed a two-thirds majority in both chambers to pass.

The reforms in SB 1008 have long been championed by Sen. Jackie Winters (R-Salem) who spent much of this session in cancer treatment. Winters died Wednesday afternoon.

“She put years of effort into this,” Bynum said, “and I think she would be proud of our efforts.

"I wish she could be here today to witness this monumental vote and the movement of this landmark legislation.”

Bynum, a mother of four, spoke of her eldest son when urging a “yes” vote.

“This weekend I bought my 15-year-old, who would be subjected to these laws, his first big-boy suit,” she said. “I got a little teary-eyed because I realized he was transitioning. He was still a little boy, but he was transitioning into a grown-up world that was waiting to receive him. And I hope that as he goes forward, he makes the right decision every single time. Because there’s a prison bed waiting for him. You already the statistics. It’s waiting. It’s right there. It’s ready. The covers are there.”

Bynum said, “We’re here today because tough-on-crime policies have failed to deliver on their promises. Or, depending on how you see things, they have delivered on their promises. Just 40 years ago, 329,000 people were incarcerated in America. Today, there are 1.46 million people locked up. And on any given day, 60,000 of those people are under the age of 18. Here in Oregon, there are more than 1,300 children in prison, and we have one of the highest youth incarceration in the country. Only Nebraska, Wyoming, and South Dakota have higher rates. We have to ask ourselves, what has that delivered for us? And as far as I can tell, not very much. These kids are not being rehabilitated while they’re locked up in prison. They’re being traumatized and put into a lifelong cycle of incarceration. And to put a fine point on it, kids who go through state prisons are rearrested 82% of the time.”

Bynum called SB 1008 “a balanced approach that will restore sanity to the way we treat kids who go through our criminal justice system” and said that “allowing judges to make decisions about whether or not a crime rises to the level of an adult court, and an adult sentence, only makes sense.”

While the bill saw some bipartisan support, pushback from the Oregon District Attorneys Association was carried forth in the form of an unsuccessful proposed amendment, submitted to the House Judiciary Committee by Rep. Mike McLane (R-Powell Butte). The amendment urged that the proposals of SB 1008 be put before Oregon voters, rather than the Legislature.

“Somebody is going to make a decision,” McLane told the House prior to the vote. “The question is, is it judges? Or is it the charging decision of district attorneys elected by the people?”

House Majority Leader Jennifer Williamson (D-Portland) challenged what she characterized as a last-minute attempt at amending what had been a more than year-long process, and argued that voters had empowered the Legislature to make such a decision with Measure 10.

Williamson told the House, “I believe that there are times when putting people’s rights to the vote of the people is not a wise move,” and I believe that allowing youth to be to appear before a judge to decide whether or not it's appropriate for them to be charged as adults or as juveniles is such a fact-specific issue for those juveniles.”

Prior to the vote, Williamson reiterated that it was “not wise to put to the voters a majority vote on whether or not our constitutional rights should be protected.”

Winters responded to the vote in a statement released by her office last week.

"Justice reform has been my passion for many years, and I am so pleased that we got this bill across the finish line,” Winters said. “We need a public safety system that holds youth accountable for crimes, but just as importantly ensures they can grow and change for the better.”

The bill enjoyed robust support not only from a number of social justice organizations, but a number of retired judges as well. More than 35 retired circuit court judges signed a letter in favor of SB 1008, alongside seven retired Supreme Court justices and two court of appeals justices.

“This is a smart policy that will vastly improve Oregon’s youth justice system,” said American Civil Liberties Union of Oregon Policy Director Kimberly McCullough in response to the bill’s success. “Research shows that young people have a great ability to grow and change. However, our current approach to charging and sentencing youth was developed 25 years ago. Everything we’ve learned about youth brain development since then contradicts the system set into place by Measure 11. This is a shift to what we know works best.”