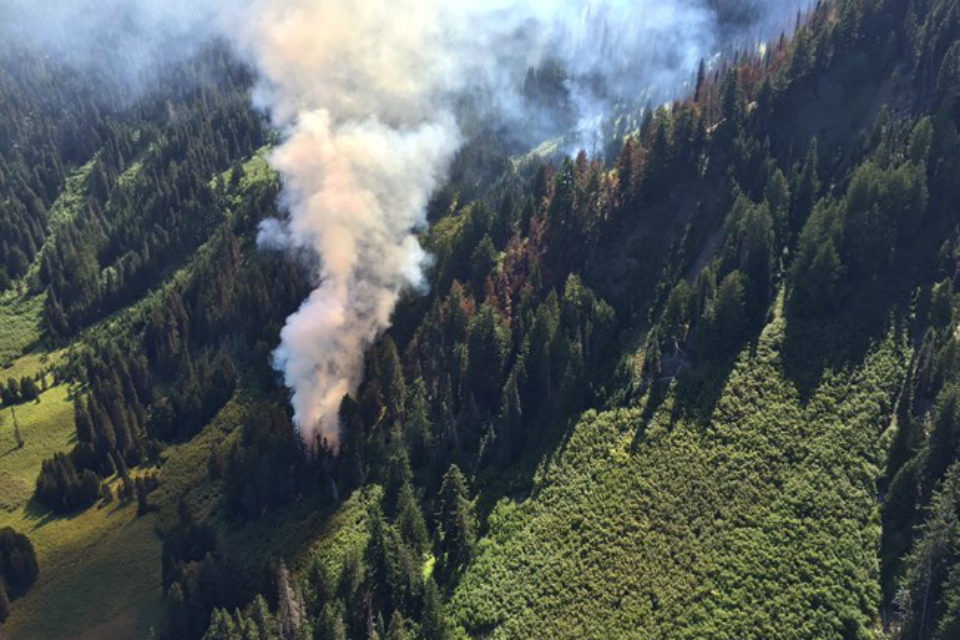 With less precipitation than normal so far in 2019 and snowpack in the North Cascades depleting rapidly, conditions are already abnormally dry and much of the western side of the state has been declared in or at risk of drought.

"It's going to be a dry summer and any outdoor burns are going to be risky," Skagit County Deputy Fire Marshal Mark Anderson said. "We saw that in March."

During an unusually dry March, 21 outdoor burns in the county got out of control.

Skagit County Deputy Fire Marshal Bonnie LaCount said the largest escalated into a 21-acre fire in the Rockport area. The second largest was a 5-acre, wind-driven fire in Clear Lake.

March through May there's generally enough rain and humidity to keep things wet.

"That's very uncharacteristic for that time of season," Anderson said of the number and severity of the March fires. "March through May there's generally enough rain and humidity to keep things wet."

The state Department of Natural Resources — the state's leading wildfire response force — fought 54 fires statewide in March, according to a news release. All but one was in Western Washington.

Skagit County Fire District 9 Chief Brett Berg said in his more than 30 years as a firefighter, he hasn't seen conditions so dry this early.

"We've had dry seasons before, don't get me wrong, but we haven't had them this early," said Berg, who was also chief of Fire District 9 in Clear Lake at the time of the 5-acre fire. "I am worried."

Skagit County Fire District 14 Chief Dave Skrinde, who as the county's all-hazard coordinator determines which county and city firefighting resources should be devoted to incidents as they happen, said he also has concerns about the early fires and the forecast for the May-August wildfire season.

Skrinde said his Alger-area department even fought a wildfire in February, while there was snow on the ground.

In light of the dry spring and a forecast for a hot summer, the wildfire potential for Skagit County and surrounding areas is already above normal and expected to stay that way through August, according to the National Interagency Fire Center's Predictive Services.

In fact, while the fire season is getting a slow start in usually dry areas of California, the Rockies and Alaska, Western Washington stands out as a region of unusual risk levels, according to Predictive Services' annual outlook.

"Drought conditions are expected to persist into the summer months, so there is an above normal fire potential there throughout the four-month period," Bryan Henry of Predictive Services said in a video statement on the 2019 wildfire season outlook.

Anderson and LaCount regularly check the latest data from Predictive Services and the regional Northwest Interagency Coordination Center to stay up to date with local fire conditions. LaCount said the information is being updated on a weekly basis, but that will soon change to daily as the regional wildfire risk intensifies.

According to Predictive Services, the risk for Western Washington will likely dominate the national agency's attention come August.

"We're expecting some pretty significant fire activity up there with pockets of above normal activity expected ... across portions of northwest Washington," Henry said.

August is when wildfires have burned portions of Skagit County in several recent years.

The Upper Skagit Complex fire in August 2015 burned an estimated 8,500 acres; several small fires occurred on county islands in August 2016, including at Little Cranberry Lake on Fidalgo Island and on Hope Island; and fires on Chuckanut Mountain and northeast of Darrington burned about 260 acres in August 2017.

And in 2018, when wildfires in Eastern Washington and British Columbia brought smoke to the region, a fire safety burn ban was in place from July through September and an air quality burn ban was issued for a week in late August.

"All the ones I've responded to have been man-made," said Chief Mike Ray of Fire District 3 in Conway. "They didn't think conditions were this dry."

None of them had the required permits for outdoor burns.

Natural Resources, along with the U.S. Forest Service and the state Department of Fish & Wildlife, recently forged an agreement that will allow better coordination to prevent and respond to wildfires.

Statewide, Natural Resources has 1,500 permanent and temporary employees who fight fires on more than 13 million acres of private and public forest lands. Those crews have access to firefighting equipment including helicopters and airplanes.

"I was super impressed with how hardworking they are," Berg said.

The station is serving as a helicopter base again this year. Berg said because of the heightened danger, the crew arrived a month earlier, in time for Memorial Day weekend.

Berg said four of the five fires his department battled this spring could have been aided by the use of the helicopter crew.

Berg and Ray said their fire district crews have outfitted their trucks with wildfire gear earlier than normal, and Skrinde said his department this year purchased a second truck made for fighting wildfires.

Although burn bans have not been issued, Skagit County's deputy fire marshals are encouraging residents to refrain from outdoor burning outside of recreational fire pits.

"We're getting into the time of year when recycling is much safer," LaCount said of yard debris. "Everyone needs to do their part ... so we don't have a major issue like other states."

While there is a cost for recycling yard debris, LaCount and Anderson said it's cheaper than paying for emergency response.

"You could be billed by the fire department or Department of Natural Resources for putting out your fire," Anderson said.

He and LaCount also urge residents to be cautious when disposing of cigarettes and to know the rules when it comes to fireworks.

According to county, state and federal agencies, the majority of wildfires are caused by humans. Of the record 1,800 fires that Natural Resources responded to in 2018, 93 percent were caused by people, according to the agency.

Natural Resources and other fire safety groups encourage residents to reduce wildfire fuels around their homes. That includes dead trees, limbs and twigs in the yard, branches hanging over the roof, debris in gutters and tall grasses.

About 2.2 million homes in Washington are at risk from wildfire, according to Natural Resources.

Al Craney, a forester who works with the Skagit Conservation District, is on a mission to determine just how many homes in Skagit County are at wildfire risk due to their proximity to forest lands or other fuel-rich environments.

He's helping the Skagit County Department of Emergency Management develop a Skagit County Wild-Urban Interface Wildfire Hazard map. It will be a tool to help residents understand their risk and for first responders to use when evaluating a fire.

"When this is ready people will be able to look at where they are and what the risks are," Craney said.

According to Natural Resources, instead of seeing scattered small fires, the state is now seeing more large fires — and the cost of preventing and fighting them is increasing.

Over the past five years, fighting wildfires has cost an average of $153 million per year, according to Natural Resources.

As the global climate warms and more development occurs in or near forested areas, the threat and cost of wildfires will continue to increase and impact typically damp Western Washington, according to the agency.

Skrinde said Skagit, Island and San Juan counties were highlighted at a workshop late last year as areas of concern in the state for increasing fire potential within the next 10 years.

"That really stood out to me," he said.

The park is seeking additional resources to prepare for the heightened risk this summer.

With the higher risk for wildfires locally, Skrinde said county and city departments may be unable to provide as much aid to outside areas, such as when they sent firefighters to California in October 2017.

"I think we need to really take a look locally and make sure we have resources available," he said.

Berg and Ray have similar concerns.