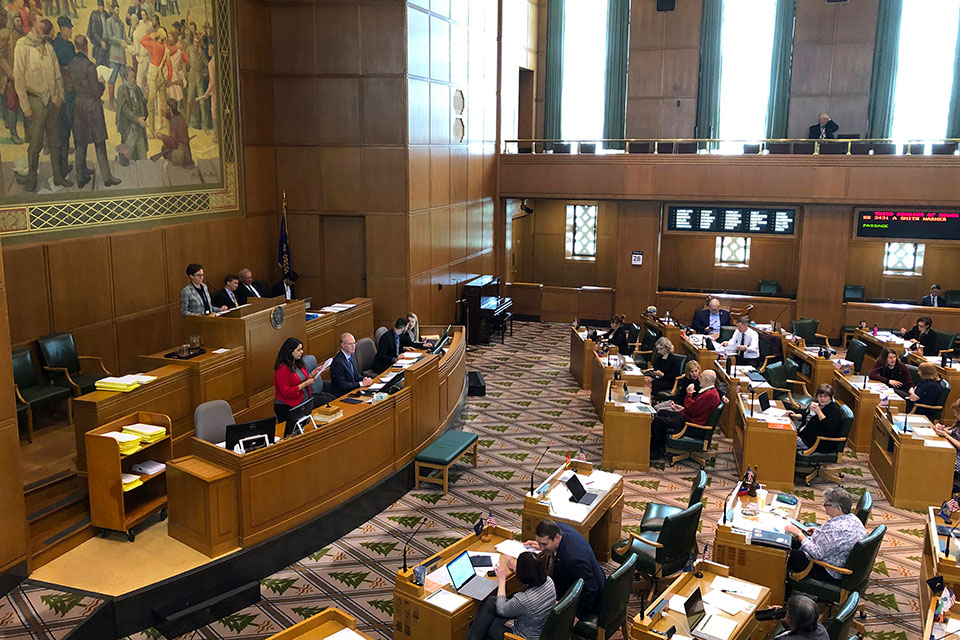 SALEM, Ore. (AP) — Republicans have forced a clerk in the Oregon Legislature to read aloud every word in nearly every piece of legislation, giving granular details about farm loans, motor vehicle taxes and other government minutiae as the minority party uses the stalling tactic to try to gain leverage.

Democrats have supermajorities in both the state Senate and House, and Republicans are using the strategy to push their own initiatives and weaken Democratic ones. Lawmakers in statehouses and in Congress have a history of turning to delay tactics — sometimes imaginative ones — to stall or kill legislation.

Minority Republicans in Colorado wanted a 2,000-page bill read aloud this year, so Democrats brought in computers to read it at hyperspeed. A judge knocked down the trick, and Democrats said they lacked time to finish everything on their agenda before the session ended this month.

In 2013, GOP Sen. Ted Cruz of Texas spoke on the Senate floor for 21 hours, including reading Dr. Seuss' "Green Eggs and Ham," to oppose President Barack Obama's health care law. In 2003, Texas Democrats fled to neighboring Oklahoma to deny enough members to vote on a redistricting bill, effectively killing it.

The effort in Oregon has put House reading clerk Lacy Ramirez Gruss in the spotlight as she reads legislation hour after hour, day after day. Lawmakers often chat or work at their desks during the readings, but they applauded after she read a 45-page bill on May 1 for more than two hours without a break.

"It was a little bit wearying. I was ready to talk until I fainted," she said, laughing.

Ramirez Gruss stands and reads bills as fast as an auctioneer amped up on caffeine. She recovers in the evening by drinking mint tea with honey and has incorporated stretching into her routine.

The longest measure so far was 62 pages. It took three days to get through it, with some House sessions lasting only an hour. She sometimes asks colleagues to help carry the load. 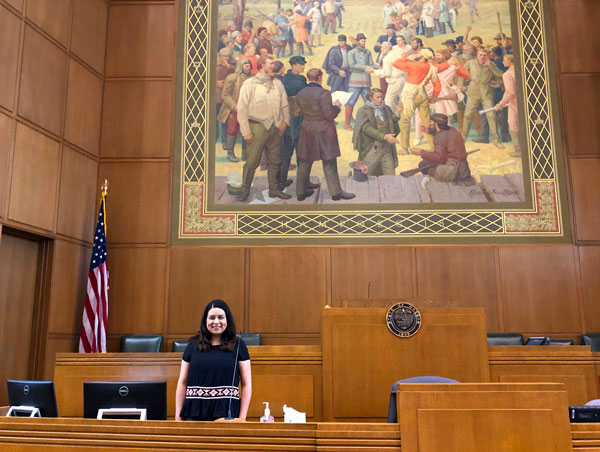 Lacy Ramirez Gruss, the reading clerk in the Oregon House of Representatives, poses for a photo during an interview on the House floor at the Capitol in Salem, Ore., on Friday, May 24, 2019. Republicans, who are in the minority in the House, have insisted since April 30 that bills be read in their entirety, not just by their summaries as is customary, in order to slow down business and try to wrest concessions from Democrats. (AP Photo/Andrew Selsky)Ramirez Gruss, who got her job in January, said it's been a learning experience and an honor, both for her and her parents, who are immigrants from Mexico.

"He would always drive by the (Oregon) Capitol and never thought that he would ever set foot in here," Ramirez Gruss said of her father. "It seemed so out of reach for him, from where he's come from. And for me to work here is such an honor for him."

She said 85 bills totaling 461 pages have been read since May 1, instead of the usual summaries.

"This has been the longest consecutive number of days of reading the bills in full that we can recall," said Timothy Sekerak, chief clerk of the House.

Even as the House whittles down the pile of measures by voting on them, the list has gotten bigger as more legislation emerges from committees.

"We're not keeping pace at the moment," Sekerak said.

But he said he's proud the Oregon House hasn't resorted to bringing in speed-reading computers like Colorado Democrats. They used five computers to simultaneously read a lengthy bill at hyperspeed, making it unintelligible. The GOP sued, and a judge said computers can't be used if they can't be understood.

"If you get too cute with it and you just really make a mockery of it, I don't think that's taking this process seriously enough," Sekerak said. "I'm kind of happy with the way we're doing it, because it gives credence to our process and dignity to it."

Republicans in the Oregon Senate also have delayed work. They refused to show up, stalling legislation for a week in early May until Democrats agreed to drop measures on childhood vaccinations and gun control. When GOP senators returned, Democrats immediately passed education-funding legislation that Republicans opposed for its tax on some businesses.

Democratic Gov. Kate Brown told reporters she doesn't believe the situation will become dire until the final two weeks of the legislative session, which ends in late June.

If, however, Republicans persist in their slowdown, House Speaker Tina Kotek "has tools available to her that aren't very pleasant," Brown said, including killing their pet projects.

Kotek this week added more House floor sessions, scheduled in the evening and one on Saturday.