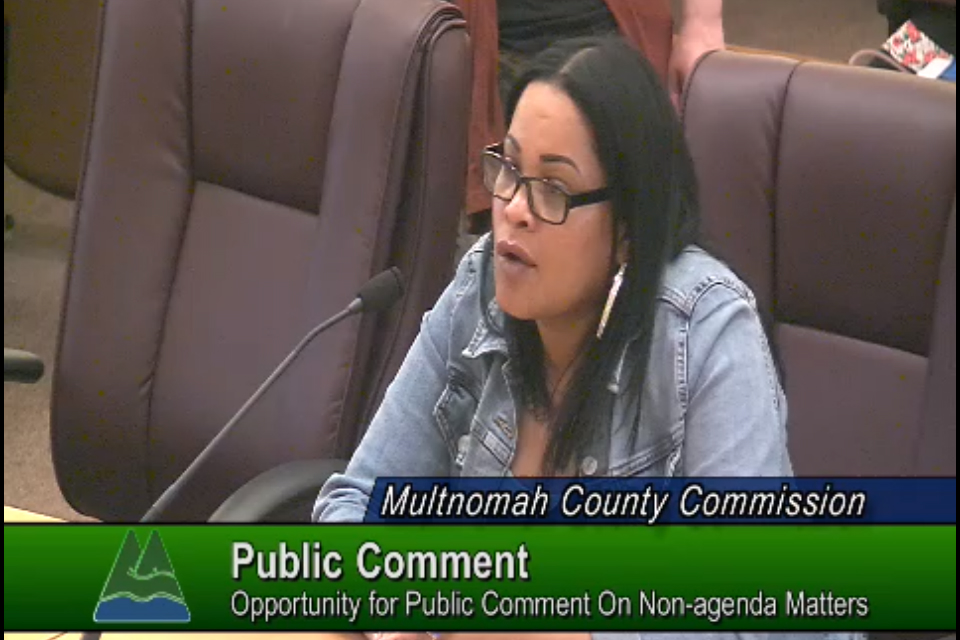 By Saundra Sorensen For The Skanner News
Published: 16 May 2019

The former director of Portland’s first Afro-Centric women’s transition home addressed the Multnomah County Board of Commissioners on May 9 to object to her abrupt firing in April, which came soon after positive performance reviews and glowing media coverage that touted her lived experience with the criminal justice system.

O’Nesha Cochran was promoted to program director at the Diane Wade House in Gresham in December. Overseen by Bridges to Change and funded by a $2 million grant from the MacArthur Safety and Justice Challenge, the house formally opened in early April. The program offers culturally specific counseling, education, employment, mental health, and addiction services for Black women, but according to Cochran had been derailed by empty commitments from a White-run organization that did not include Black leaders in decisions about budget and programming.

“Bridges to Change has been run by cis White men from 2004 to 2015,” Cochran told the board on Thursday. “Shelly Mead was the first White female they gave a leadership position to. It’s been 15 years. They’re the only re-entry program that’s as large as this in Portland. In Multnomah County, Blacks are 5 percent of the population. We are 29 percent of the prison and jail population. Why doesn’t the re-entry program leadership and employees match the people that are coming out of jails and prison? We have no support.”

Cochran said she hadn’t had a direct supervisor since stepping into her role in December, when operations director Mead, whom Cochran regarded as a mentor, resigned after a period of protected leave. Cochran felt shut out of the resulting interview process and said that Bridges to Change executive director Monta Knudson was vague about when Mead’s replacement would be hired.

Cochran was dismissed from her $47,840-a-year position on April 29, which she says was not even a week into a six-week performance improvement plan implemented by her supervisors at Bridges to Change. Even that pushback had caught her by surprise.

We’re putting you on a performance improvement plan. We feel you lack leadership skills

“On April 10, I’m on the front page of The Oregonian,” Cochran told The Skanner. “On the 11th, (Bridges to Change executive director Monta Knudson and director of treatment services Katelyn Bessette) called me into their office and said ‘We’re putting you on a performance improvement plan. We feel you lack leadership skills.’”

Cochran said that plan was put into place on April 25, when she returned from an approved vacation. In a copy of the signed plan Cochran showed to The Skanner, Bridges to Change administrators advise Cochran to be more conservative in her personal social media postings, and criticize Cochran for an incident in which she allegedly spoke negatively about a probation officer to a client. She was also reprimanded for the way she handled a client discharge -- a process she says she had not yet been trained for.

Cochran agreed in writing to the terms of the performance improvement plan. On April 29, she was dismissed "due to an ongoing pattern of failure to demonstrate effective leadership and professionalism,” according to the termination letter she provided to The Skanner.

Cochran says there had been no incident that would have constituted a fireable offense.

“They didn’t even give me a week to do anything,” Cochran told The Skanner. “I was tokenized for a purpose.”

Diane Wade House resident assistant Shalontelle White-Preston agreed, telling the board that “after the ribbon-cutting, it seemed like the glitz and glamor left, and the real faces came out. And I just want to say it’s unfair. I’m still an employee there, and I see that all the struggle that the women are still facing without the care and the support that O’Nesha has been bringing to the table.”

The house is named for a beloved parole and probation officer who served Multnomah County until her death in 2010, and who worked with Cochran during the latter’s incarceration. Wade’s mother told the board by phone that she was “dumbfounded” to hear of Cochran’s firing, saying it did not seem true to the spirit of her daughter’s namesake program, or to her daughter’s work.

Cochran sees her firing as retaliation for her complaints to Bridges to Change administrators about “implicit bias, racism, and not having senior leadership” in the program.

Diane Wade House resident Philisha Davis said that Cochran’s sudden absence, and a lack of explanation from Bridges to Change, were re-traumatizing to her and other clients.

“I feel nervous since O’Nesha left,” Davis told The Skanner. “We’ve got severe PTSD, we feel safe, then we feel like a tornado ripped through. And they’re treating us like how we were when we were little, when we got molested or raped or something like that. We didn’t talk about it and you swept it under the rug. That’s how it’s being treated.”

Cochran also found the experience to be re-traumatizing.

It was just the trauma that I went through as a Black woman, and it’s the trauma so many people in the community go though. By trusting the system one more time.

“I was suicidal,” she told The Skanner. “I haven’t felt suicidal since I was 18 years old. It was just the trauma that I went through as a Black woman, and it’s the trauma so many people in the community go though. By trusting the system one more time. Not only did I trust the system, I vouched for it.”

Allegations of Cochran’s lack of professionalism do not sit well with her supporters, many of whom include Black women who have worked for Multnomah County in the past and found it to be an uneasy fit. Many testified to the board that “professionalism” is coded language that gets to the heart of the program’s purpose: a culturally competent place of healing for Black women who have often been accused of being aggressive, or otherwise incompatible with predominantly White institutions.

Cochran and her supporters called for an audit of the program and asked the board to ensure the program had Black leadership.

“What was done to me was wrong, Chair Kafoury,” Cochran said. “And me and you stood together, we held hands and we said we were going to fight together. Fight with me now.”

Kafoury offered to meet with Cochran after the meeting. According to Kafoury’s office, no meeting has yet been scheduled.

“The Chair’s office is undertaking a deep examination of what happened at Bridges and what needs to occur so that women at Diane Wade are successful in their re-entry to the community and to their continued recovery,” Multnomah County communications director Julie Sullivan-Springhetti said.

“I am 110 percent dedicated to the Diane Wade House and its Afro-centric focus,” Kafoury told The Skanner by email. “I am committed to wrapping resources around the program staff and the women living there. I believe in the spirit of Diane Wade and the impact this house will have on individual women and on our entire community.’’