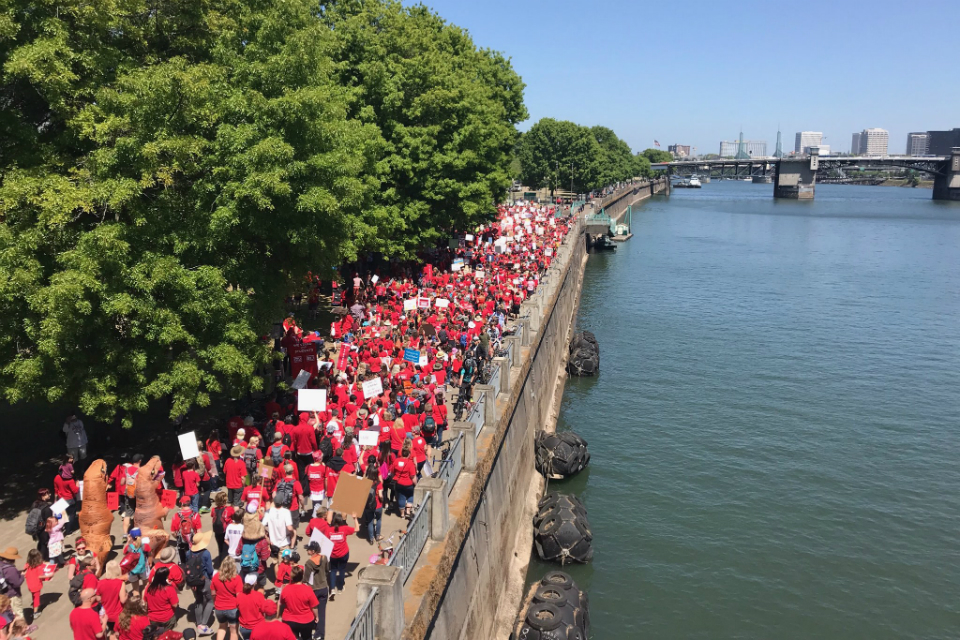 House Bill 3427, also known as the Student Success Act, passed out of the Oregon Senate Monday after a week of drama that included a massive teacher walkout and Senate Republicans playing hooky to avoid a vote. 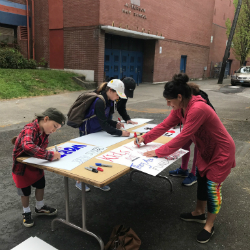 Supporters, including teachers and students, gathered at Jefferson High School Wednesday morning to make signs and prepare for the May 8 Day of Action to rally for education funding. (Photo by R. Dallon Adams)To get the bill through (and bring Republicans back to the negotiating table), Senate Democrats reportedly struck a deal to kill a bill to strengthen gun laws and one to do away with non-medical exemptions for childhood vaccines. Sen. Betsy Johnson (D-Scappoose) said she wouldn’t support the Student Success Act if Democrats didn’t also commit to PERS reform. Senate Bill 1049, a PERS reform bill Democrats introduced Friday to bring Republicans back to the floor, was scheduled for a hearing as The Skanner went to press Wednesday.

The bill will provide $2 billion in funding for Oregon schools by imposing a tax (roughly half of one percent) on businesses with more than $1 million in Oregon sales annually.

“Educators and public school families can start to breathe a sigh of relief tonight, knowing that instead of worrying about budget cuts, we can instead focus on the educational needs of our students and our future,” said John Larson, high school English teacher and president of the Oregon Education Association, in a press statement Monday.

Republicans called the bill a “hidden sales tax” and said the proposal would have a negative impact on businesses in the state.

The bill was front and center May 8 as teachers and students rallied in Portland, Salem and elsewhere throughout the state to call for more funding. Portland Public Schools closed in anticipation of the teacher walkout, which drew an estimated 20,000 people to Tom McCall Waterfront Park in downtown Portland.

Oregon’s walkout followed similar demonstrations around the country as part of the National Education Association’s #RedForEd campaign. Elsewhere, educators have used protests to demand higher salaries as well as increased school funding. However, PPS and the Portland Teachers Association reached an agreement on a one-year contract extension earlier this year including a 3 percent cost of living raise. So Oregon teachers were more focused on addressing funding to address ballooning classroom sizes, staffing cuts and gutted arts programs and more.

It is not about pay at all. Our contract is done. We are not negotiating pay, we are losing employees

“It is not about pay at all. Our contract is done. We are not negotiating pay, we are losing employees,” said Lauren Held, a school counselor at Creston Elementary School, told The Skanner. “So I can tell you that next year in my building, we will not have kindergarten aides.”

Oregon has some of the largest student-to-teacher classroom ratios in the country, with approximately 25 students for every teacher according to the 2016 Oregon Department of Education Class Size Report. Nationally, in 2016-2017, the classroom average was nearly 16 (15.96) students for every one teacher per data from the National Education Association (NEA).

“When we have 511 students or more per counselor and I’m spending, let’s say, 80 percent of my fall with my [kindergarteners], I’m not effectively serving the other students in my school,” Held told The Skanner.

In addition to small classroom sizes, many students no longer have access to enrichment courses like art and music. Rather than fully cutting other enrichment programs, some schools have resorted to supporting the arts “half-time,” as one teacher put it.

The Student Success Act divides funding into three basic categories. About half of the money establishes a school improvement fund in the form of school district grants focused on increasing attendance, improving graduation rates and lowering class sizes. Approximately 20% of the money will go to early childhood education programs and another 30% will fund statewide career and technical initiatives (such as Measure 98).

These are the kids who are going to lead our future, and they need the best support that they can get.

“These are the kids who are going to lead our future, and they need the best support that they can get,” Creston counselor Held told The Skanner. “Whether it’s academics, social, emotional, support or career focus. They need to be able to have all of those supports in place so that they can be productive citizens in our future.”

While the Student Success Act may have passed despite rare brinksmanship tactics, Republicans and business advocacy groups stress the importance of PERS reform moving forward in the legislative session. Some have expressed concern that without true PERS reform, these new education funds may never make it to the schools.

Two years from now, we’ll have another manufactured education budget ‘crisis’ for a failure to meaningfully reform PERS

“Given the increased cost of PERS, we anticipate very few dollars of these back-door taxes will reach the classrooms,” said Lou Ogden, executive director of Unified Business Oregon. “Two years from now, we’ll have another manufactured education budget ‘crisis’ for a failure to meaningfully reform PERS this session. The new PERS bill (SB 1049) offers no reforms, rather, it restructures the life of the debt, kicking the problem further down the road and leaving Oregon vulnerable to deep market losses in a recession.”