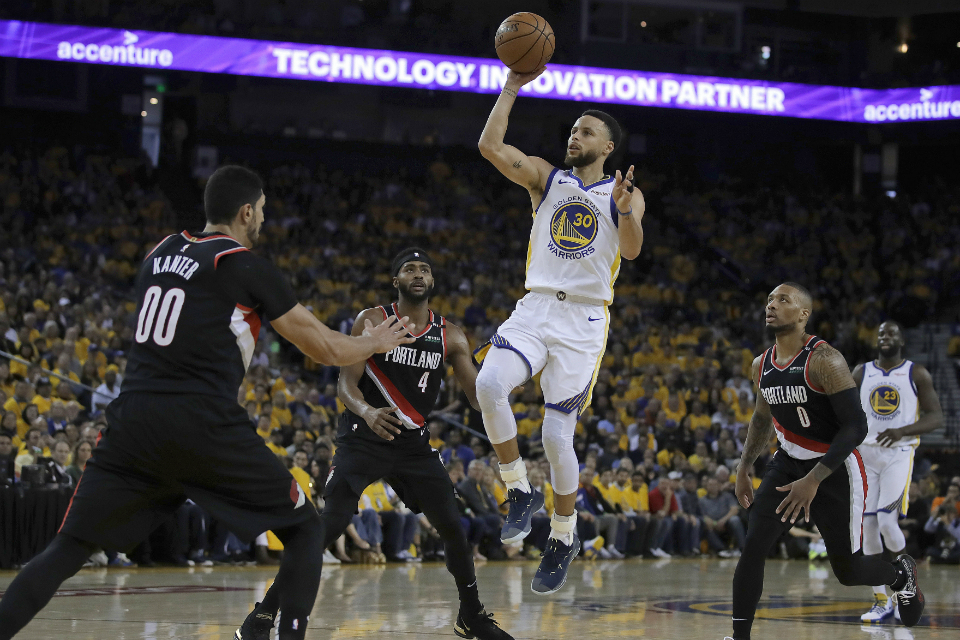 OAKLAND, Calif. (AP) — Stephen Curry had all kinds of room for a change and capitalized, finding his shooting touch in a hurry to get Golden State on a roll. Portland's defenders were too far back in the paint or a step behind all night.

So far, the Warriors are showing they can keep winning until Kevin Durant gets healthy.

Making it look easy again, Curry knocked down nine 3-pointers on his way to 36 points, leading the two-time defending champions past the Trail Blazers 116-94 on Tuesday night in Game 1 of the Western Conference finals.

"I know what I'm capable of on the floor. The situation calls for me to be a little bit more aggressive and hopefully that'll continue," said Curry, who came in shooting 37.1% on 3s this postseason. "Obviously it's nice to see the ball go in. I didn't shoot the ball well for 4 1/2 games the last series and got off to a good start tonight. I want to maintain that. Every game is different, you've got to re-establish yourself. That's my perspective no matter how I play."

Curry shot 12 for 23 in his fourth 30-point performance this postseason, finding far more open looks than he had in the last round against Houston. The two-time NBA MVP outplayed the Portland duo of Lillard and CJ McCollum, who combined to go 11 for 31 against a strong Golden State defense.

"It's good to see Steph have a game like that at a time that obviously we need him most," Draymond Green said.

Klay Thompson had 26 points, including a late one-handed slam. Green established the energy on both ends early for the well-rested Warriors, finishing with 12 points, 10 rebounds, five assists, three blocks and two steals.

Lillard scored 19 points back home in Oakland, just miles away from where he grew up. He appreciated all the support but wants to stick to basketball.

I could walk home from here if I wanted to, that tells you how close it is.

"That's part of what makes it special, I'm from here," Lillard said. "I could walk home from here if I wanted to, that tells you how close it is."

McCollum had 17 and missed five of his six 3s as the cold-shooting Blazers went just 7 for 28 from long range.

Game 2 is Thursday night, and the Warriors are unlikely to have Durant back from a strained right calf. An update on Durant's status is expected that day once the two-time reigning NBA Finals MVP is re-examined.

"I think we played a terrible game and we still had a chance going into the fourth quarter," McCollum said, "so we need to tighten some things up and look forward to the game on Thursday."

Curry came off screens with authority and matched his postseason career high for 3s, also accomplished in Game 1 of last year's finals against Cleveland. He found his groove far earlier than in the Game 6 clincher at Houston on Friday night, when he scored all 33 of his points in the second half.

It's not one-and-done. We've got a series, it's one loss.

"It's not one-and-done. We've got a series, it's one loss," Blazers coach Terry Stotts said. "We've got to play better, particularly at the offensive end, but we've got to be better at both ends."

Lillard hit a game-winning 3-pointer with 6.3 seconds remaining in overtime Dec. 27 in his last regular-season game at Oracle Arena. He averaged 28.3 points and 6.5 assists in four regular-season games against Golden State this season.

He arrived for Game 1 in a custom Oakland Athletics baseball jersey having averaged 30 points in his nine previous playoff matchups against the Warriors.

"This series is going to get tougher and tougher," Green said.

Between warmup shots, Seth Curry stole a glance to the other end as his big brother went through his own pregame routine.

Back in the locker room, Stephen Curry said, "That was wild." Then, he joked, "Only me and Seth are going to score, the whole series."

The Currys became the first brothers to ever face off in a conference final and the first in any round since Marc Gasol for the Grizzlies against Pau Gasol and the Spurs in the first round of the 2017 playoffs.

"I caught myself a couple times looking up in the stands at my parents," Stephen Curry said.

"The schedule favored us but I thought we took advantage of the situation and got off to a good start," Kerr said.

The Blazers traveled straight to the Bay Area from Denver after winning Game 7 on Sunday rather than return to Portland.

"Denver seems like a week ago now," Stotts said.

Trail Blazers: Portland committed four quick turnovers and finished with 21 for 31 Golden State points. ... G Rodney Hood, who suffered a bone bruise in his left knee Sunday against the Nuggets, scored 17 points. ... Portland is 1-9 all-time against Golden State in the playoffs.

Warriors: Damian Jones, who began the season as starting center, returned from a torn left pectoral muscle to play in his first game since Dec. 1. ... Golden State is 18-1 in Game 1 of a playoff series dating to the 2015 title run, having won the last 12 postseason openers.