Warriors' Durant Likely out for Games 1 and 2 vs Blazers 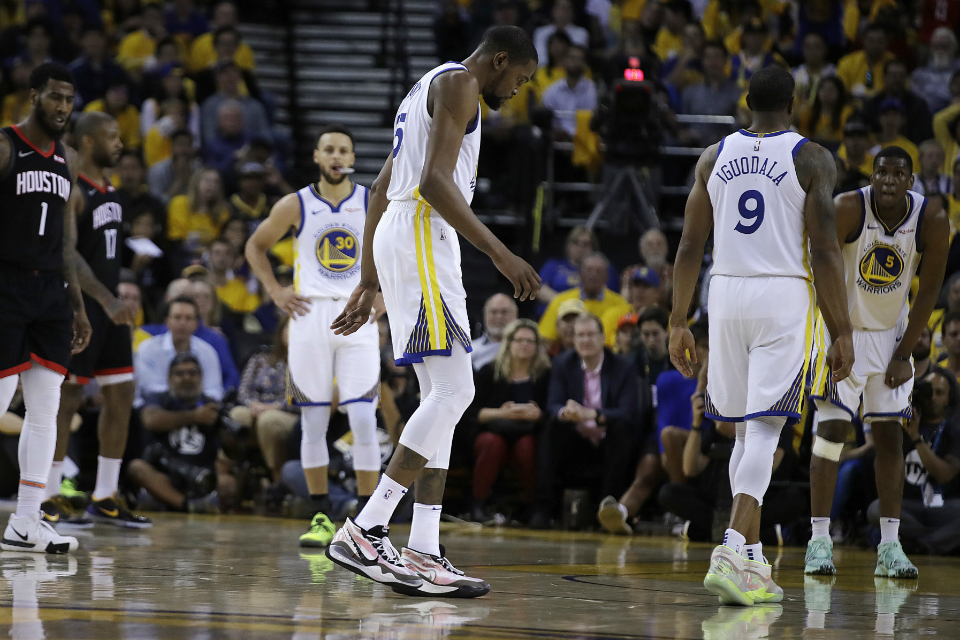 OAKLAND, Calif. (AP) — Kevin Durant watched from home in the Bay Area as the Golden State Warriors finished off James Harden and the Houston Rockets on the road.

The two-time reigning NBA Finals MVP has a bit more cheerleading to do before he gets back on the court.

Durant is likely to miss Games 1 and 2 of the Western Conference Finals against the Portland Trail Blazers while he recovers from a strained right calf. Durant was injured in Game 5 against Houston.

Everyone needs to slow down a little bit on the Kevin stuff. He hasn't even stepped on the floor yet.

"Everyone needs to slow down a little bit on the Kevin stuff. He hasn't even stepped on the floor yet," coach Steve Kerr said Monday, a day before Game 1, noting a more extensive update would come Thursday.

Golden State showed it can win without KD: Stephen Curry came alive at last in the second half of the clincher at Houston, scoring all 33 of his points after the break.

Curry and Splash Brother Klay Thompson will look to build off strong performances in that final game against the Rockets to lead the top-seeded Warriors. The two-time defending champions are seeking a fifth straight trip to the NBA Finals.

They will face another formidable backcourt with Damian Lillard and CJ McCollum when the best-of-seven series begins Tuesday night at Oracle Arena.

There are several intriguing storylines in this matchup, too, like Portland star Damian Lillard coming home to Oakland with a chance to shine on the big stage in the final season at Oracle before the Warriors move across the bay to play in San Francisco next season.

And how about the Curry brothers? Steph's little brother, Seth, plays for the Trail Blazers.

The Warriors swept the Blazers in the first round two years ago during a remarkable 16-1 postseason run.

Lillard missed his first six 3-point tries Sunday then swished one midway through the fourth when Portland needed him most. The Trail Blazers overcame a 17-point deficit on Denver's home court to outlast the Nuggets for a 100-96 win.
They have reached their first conference final since 2000, when Portland lost in seven games to Kobe Bryant and the eventual champion Los Angeles Lakers.

This is arguably the biggest win that we've had in the franchise for a long time.

"This is arguably the biggest win that we've had in the franchise for a long time. To be a part of it, to do it the way we did, I'm thrilled," Blazers coach Terry Stotts said. "I'm really happy for our guys. As a coach, I think you experience the joy of the team, having different guys come in."

Here are some things to watch as the Warriors join the Lakers as the only teams to reach at least five straight Western Conference Finals:

"Has he had a lot of wins in Oakland?" Thompson cracked Monday. "It's playoff time. He has had good games. Yeah, he's a great player. There's a history between us obviously, the franchises, we've seen them a lot the last five years. They're playing great. They're on a roll, our antennas are definitely up."

Curry texted his little brother over the weekend to let him know they'd see each other soon. Yes, wearing opposite jerseys for the Western Conference Finals.

The Currys have played many times, just not on the postseason stage.

"He said, 'I'll see you Tuesday.' I'm looking forward to it," said Seth, who's in his first season with Portland. "It's going to be a lot of fun. It's hard to believe right now. So many years I've watched Steph play in the Western Conference Finals, the NBA Finals, being in the crowd. It's going to be fun to be out there on the court, competing, to get to that final. It's a dream come true for us, but our families are going to have a lot of fun as well."

Even if a tad bit torn. Their parents will flip a coin, with Dell and Sonya each sporting one son's gear depending on the result.

Their sister, Sydel, posted on Twitter shortly after the Blazers won: "Engage....#NeutralNancy lol."

"I just know watching Seth play I get nervous watching him like on TV and stuff," Stephen said after practice Monday. "For them, it's family and parents who supported us all the way through the ranks. Now to be in a situation like this where I guess it's technically a win-win for them, they're going to the finals regardless, but it's kind of crazy to think we're all on this stage and get to play in front of our family and just the amount of happiness and joy that comes with that is crazy."

An extremely thirsty Enes Kanter loaded up his backpack with five or six bottles of Gatorade after Game 7 — for later.

The Trail Blazers center avoids food and drink from sunrise to sunset as part of the Muslim holy month of Ramadan. It was that way for the last three games of the Denver series and will be that way during the Golden State series.

Kanter said he reached out to NBA great Hakeem Olajuwon for advice on performing in the playoffs while fasting during Ramadan.

"The game of basketball is mental over physical so I think I'll be fine for this stretch," Kanter said.

Golden State finished off the Rockets in Houston on Friday night, so the Warriors got some rest this time after a quick turnaround following a six-game series in the first round against the Clippers in which they had to play again about 40 hours later.

Injured Warriors big man DeMarcus Cousins has used the time to continue his rehab from a torn left quadriceps muscle suffered in Game 2 of the first round against the Clippers. It's unclear yet whether he might be able to return this round.

The Warriors struggle when they get sloppy — and it's a fine line of being chaotic when it works so well and when they become careless and it's costly.

On the rebounding front, Golden State won three games when it outrebounded the Rockets and another — Game 6 — despite a disadvantage on the boards.

The Blazers had 55 rebounds in the clincher, with Kanter grabbing five on the offensive glass.