Inspired by King, Making a Change Through Service

This year The Skanner talked to people who volunteer with children about how the life and work of Dr. Martin Luther King Jr. has inspired them. 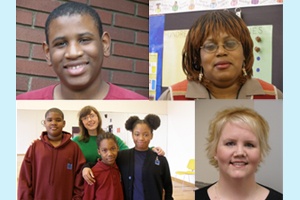 
David Howard, a freshman at Grant High School.
David Howard credits his computer expertise to an Intel program that teaches advanced computer technology skills such as robotics to young people. The group brought together students from across Portland to learn about computers through mending and building computers for schools. As a volunteer, David now tutors other students in Bethel A.M.E. church's technology center, teaching computer skills. Dr. Ernest Herzog, president of Bethel A.M.E. Economic Development Corp., says: "I think he is having a very positive impact on other kids. I've had a chance to observe this young man for several years now and he has a great attitude. The other kids respect him, he does very well in school; he is a model."
• Volunteers Site: Bethel A.M.E. Church Technology Center, 5828 N.E. 8th Ave., Portland.
• Hours spent: Several hours on Sundays, sometimes spend time helping out on other days as long as he has finished his schoolwork.
• Volunteer work: As a volunteer at Bethel A.M.E.'s technology center, David shares his skills with other students. "Some of them just want to learn how to use a computer, and others want to be computer technicians when they grow up," David says. " I just teach them the basic parts of a computer. I help adults too – if their computer is broken they call me up and I'll fix it for them."
• King's inspiration: "I learned about Dr. King in elementary school and middle school. I think of Dr. Martin Luther King as a person who worked to bring people together instead of being against one another. He was a very inspiring person who was there to help people with their problems and a peacemaker."

Everline Young, recent graduate of Portland State University's teaching program.
Everline Young, who now has six grandchildren, has worked with several organizations since her children were young, including Head Start, Multnomah County Library, Ockley Green Middle School and James John and John Ball elementary schools. This spring she graduated from Portland State and currently is applying for her teaching license. She hopes to find work as an elementary school teacher in the Portland area.
• Volunteer site: Rosa Parks Elementary School, 4221 N. Willis Boulevard.
• Hours spent: Volunteering two days a week but will possibly add one more day.
• Volunteer work: "Right now I am working with 5 and 6-year olds in a kindergarten class. I help out in the classroom. What you do depends what class you are with. Last spring, with another teacher, I did more organizational work, but in this classroom I'm working more with the children. I do one-on-one reading and math – whatever we're working on in class. Sometimes the teacher has a list and it might be copying or making up booklets. It gives the teacher some time to do her planning and whatever she needs to do.
"The unity they have and the atmosphere here makes it really comfortable for people to come in and volunteer. I volunteered at other schools too and they also were great. I enjoy all of it but I think I enjoy challenging the children the most. I tell them what expectations I have and see if they can meet them. I try to help them advance to the next level and when they succeed I praise them and motivate them.
• King's inspiration: What inspires me is learning to give without expecting anything back. Most people in this world want something for something. Dr. King just did what he had to do for his people not expecting or wanting anything back. I think he did his work without expecting to receive a monetary reward for it. It made so many lives better. Sometimes you have to stand up for what is right even if you have to stand alone. Sometimes that is all that is needed – for one person to stand up so that other people won't be afraid to speak out.

Kimmy Kunkle, Portland Community College student.
Kunkle, who grew up in Vancouver, currently is studying African American History and Spanish at Portland Community College's Cascade campus. This fall, she plans to go to New York City to volunteer with the nonprofit City Year, where she will spend more than 10 months working with inner city children. Her goal is to become a school counselor working with middle school age students. "I get really frustrated that all the different cultures in the United States are not represented in the history we are taught," Kinkle told The Skanner, "It's really important to me that everyone's story is told." Kinkle appeared in a PCC Cascade dramatic presentation of Dr. King's "I have a Dream" speech on the civil rights leader's birthday, Tuesday.
• Volunteer site: Self Enhancement Inc. 3920 N. Kerby Ave., Portland.
• Volunteer work: Spends one-to-one time with eight middle-school students, reading or working on math. "Everyone here knows all the kids so it is a nice place to work."
• Hours spent: Since October, she has volunteered about six hours a week.
• King's inspiration: Although I heard about Dr. King in elementary and middle school, but I didn't really know his whole story until I started studying African American history.
"He's very inspiring to me. I believe he wasn't done doing what he was meant to do when he was assassinated and I feel that we have to continue his work. His dream did not die when he did so I feel we should take his message and apply it today and continue on.
"Personally for me inequality in education is a key issue. I have seen that both here and in Mexico. The government does not seem to be fair to me – (in its approach to education). In general I think continuing Dr. King's work means creating tolerance and fighting racism."

Tammy Deardoff,  Project Manager with Intel Corp.
Born in Michigan and raised in the Midwest, Tammy Deardoff has worked for Intel for 11 years. " I lead teams of people to get whatever needs done, done," she says of her work. After a two-month sabbatical last year — Intel gives a sabbatical to every employee after seven years with the company – Deardoff said she realized work was not meeting all of her needs to contribute to the community. "I needed to do something that fed my soul," she said. She decided to volunteer for a nonprofit that worked with children.
• Volunteer site: Self Enhancement Inc. 3920 N. Kerby Ave., Portland.
• Volunteer work: "I'm helping with whatever needs to be done. I have good computer and administrative skills so I will be using those here. I'm going to be on the 'Here and Now" committee which is organizing a huge fundraising event for SEI – an auction. That will start soon and the work will continue until the event next October.
"I realized when I had my sabbatical that I really wanted to spend more time doing things that directly and positively impact the community and in an area that is meaningful to me. I believe in the programs that SEI has going, and I like being here. I like the people; I'm comfortable here; and I like helping kids directly or indirectly. I hope to make a difference."
• Hours spent: "About two a week at the moment, but that will probably increase when the 'Here and Now' committee gears up.
• King's inspiration: Dr. King is absolutely relevant to us. I believe that we all have a fundamental right to freedom and it's important to achieve that in positive and nonviolent ways. Also in the spirit of breaking down walls of racism I want to say 'No matter what people have done in the past, I am not that way.' It is about treating all people with respect and kindness.
No matter where people come from and whatever their background, they all have a right to freedom, they all have a right to education and they all have a right to feel safe."